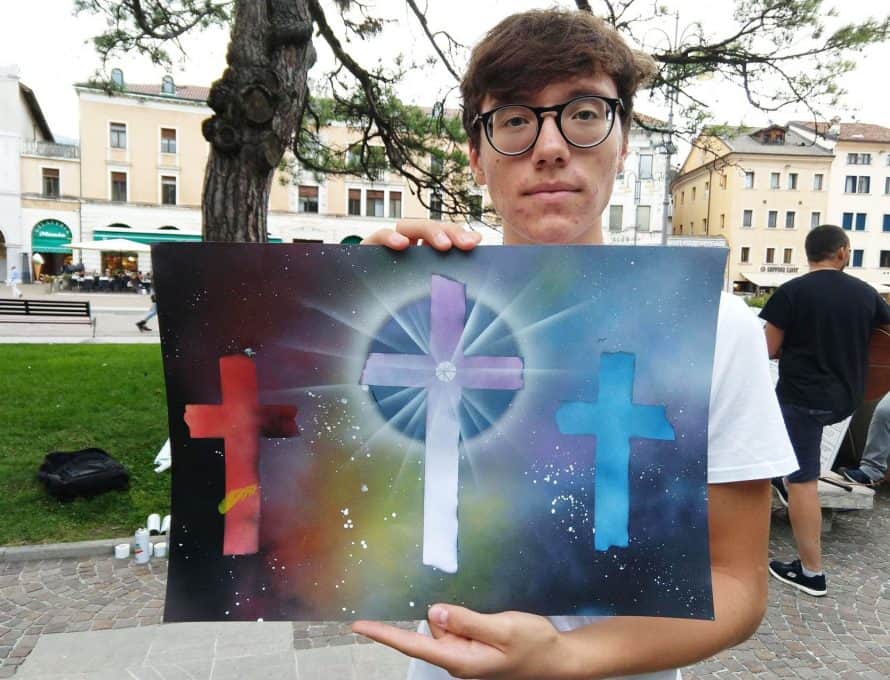 BELLUNO, Italy – Gabriel, a youth at the local church in Belluno, shows off one of the finished paintings that were done by Missouri Baptist spray paint artist Jared Griffin during a mission trip here last month. Photo by Jeremy Sells

BELLUNO, Italy — Former art teacher turned youth pastor, Jared Griffin pulled out cans of spray paint and set up an easel on in a public park in this northern Italian town of Belluno, population 35,876. He was there with a recent mission team from the Cape Girardeau area. Their intent was to attract Belluno residents viewing the art creations and engage them in conversations about the Gospel.

Why spray paint cans? In Italy there is a great appreciation for art. Classical sculptures, paintings and frescos abound. But the younger people are very creative in their application of graffiti in many public spaces. “Grafitti is not as negative a thing there as it would be in the U.S.,” says Pastor Jeremy Sells, of First Baptist Church, Scott City, leader of the mission team.

“Spray paint art would draw a crowd. Jared is skilled with making spray paint pictures. It especially drew in the younger people.”

“The older people stop to check out the gathering crowd,” Sells added. He said the young men would crowd around and watch the spray painting and then applaud when finished. They felt a real connection.

Griffin said he would mostly paint pictures of landscapes and would usually include a cross in the picture. “And I always added the Scripture (in Italian), Psalm 24:1 “The earth is the LORD’S, and the fullness thereof; the world, and they that dwell therein” (KJV).

This would open up opportunities for members of the local church to interact with the crowds that were gathering. Sells said the folks from the Evangelical Church of Belluno would strike up gospel conversations with the people. Earlier that week mission team members had led the church through the neighborhoods walking and praying for evangelistic encounters.

Sells said there was a darkness in the city, which is predominantly Roman Catholic in name, but not in practice. Suicides and divorces are on the increase in recent years. Most people do not attend church or have any meaningful interaction with God, Sells said.

Kyle Brown was the group’s prayer leader. “We did prayer walking to break down the walls of Belluno,” he said. “It was as if God was holding back the gates of Hell.” He said in much of the graffiti they observed in Belluno, there were halos painted above the heads of certain people. They were told these represent friends of the graffiti artists who have died or committed suicide, which seems to be all too common there.

“We were prayer walking one morning and came across three guys who were in the park and had been drinking beer all night,” Sells said. They were barely coherent and the group prayed for them but couldn’t really share the Gospel with them.

Sells said less than one half of one percent of Italians are considered evangelical Christians. They tend to view Baptists as a cult, much like Mormons or Jehovah’s Witnesses. He said that is especially true in the northern part of the Italian nation.

“Italy is not a third world country. It’s not like they need medical missions or donated eyeglasses. But they are so lost. There is a tendency to overlook a place like Italy,” Sells said.

The group tried to encourage the Belluno church with a marriage class, prayer walking and fellowship. They gathered with the congregation of about 50 believers for meals and coffee.

“They love to compare their foods with us,” Sells commented. He said American pizza seemed so strange for them—too thick compared to the very thin crust and light pizzas there. The Italians love their espresso and cappuccino coffee drinks, and they shared them often with the Americans. A small cup of strong espresso is usually consumed in two sips he said.

The association DOM, John Vernon, said their association has sent three teams this year, and they have a strong partnership with the northern Italy region.

The Multiplying Churches group at the MBC has been praying that the Lord would call out six churches to step into partnership with missions opportunities in Northeast Italy. Contact Rick Hedger, MBC multiplying churches director for more information on a mission partnership in Italy.

Sells said their trip cost the team about $1,800 per person, including airfare. He encourages people to check out the opportunity.