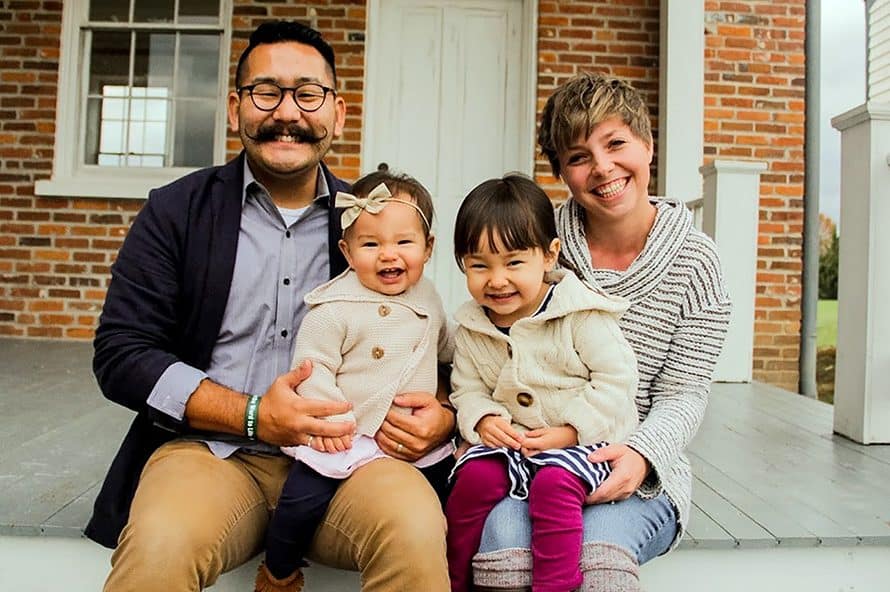 TROY – Jonathan Hayashi and his wife Kennedi have two young daughters, Kaede and Anna, and are pursuing adoption of a young boy in Bulgaria. Submitted photo

TROY (BP) – Had it not been for the faithfulness of Southern Baptist missionaries, former Japanese gang member Jonathan Hayashi may have never found salvation, a call to ministry – or, most recently, a seat on the Missouri Commission on Human Rights.

Missouri Gov. Mike Parson appointed 29-year-old Hayashi to the commission on June 17. He was also named as vice chair.

Hayashi serves as music and worship pastor at First Baptist Church in Troy. He is also the general secretary for the Southern Baptist Convention’s National Asian American Fellowship; a regular columnist for The Pathway newsjournal of the Missouri Baptist Convention and a member of its Apologetics Network.

Though commissioners do not often enter the public spotlight, their work is central to many cultural issues facing the United States today. After all, it was Colorado’s civil rights commission that sued Masterpiece Cakeshop owner Jack Phillips for declining to bake a cake for a same-sex “wedding” in 2012 – a case in which the U.S. Supreme Court ruled last summer that the commission violated the religious free exercise clause of the First Amendment by acting with “religious hostility” against Phillips.

Hayashi, on his appointment to the commission, said, “I am so thankful for this opportunity to serve in this new leadership capacity along with some wonderful leaders throughout our great state.”

Of course, he admitted that – as a minister and a father of young children – this additional role can seem “overwhelming” at times.

“But then,” he added, “I look back at God’s faithfulness. … I’m just a monument of His triumphant grace.”

On the same week of his appointment to the Missouri Commission on Human Rights, Hayashi returned to his childhood home with a mission team from FBC Troy. While there, he met with International Mission Board personnel in the region and shared with them about God’s grace in his life.

He recounted that by the time he was 15-years-old, he had been arrested, tried and put behind bars. At that time, he hated Christians, he hated his father and he hated God. But God was at work to bring salvation to Hayashi and his family long before this through the faithfulness of Southern Baptist missionaries.

During the 1980s, when Hayashi’s mother Yukiko studied English at a college in Sendai, Japan, she met IMB missionaries Tony and Marsha Woods, who were using the Bible to help students improve their English. Soon, she came to faith and began a lifelong walk with the Lord.

Then she met Hayashi’s father, Takakazu. Although he wasn’t a believer, she married him on someone’s advice that it would be a way to win him to faith. Yukiko tried to teach her children about the Lord and take them to church, but her husband, a staunch atheist, berated her for doing so.

His father, who became a Christian years later, “really thought we were a bunch of fools believing in a fairy tale. Growing up, I lived in fear of him,” Hayashi said of abuse that his mother and the children endured.

“It was unbearable,” he said. “The only place I could run away from reality was music. Whenever I was scared, hurt, mad or angry, I ran to the piano. It gave me this temporary peace, but it didn’t last long.”

Problems at school only added to Hayashi’s pain and anger. Since he was born in Kentucky and moved back to Japan when he was 3, he struggled with Japanese. His peers mocked him not only for this, but because he was seen as a Christian. And as he got older, the abuse became physical. On one occasion, a group of seniors left him bruised and bleeding in the school bathroom after beating him with a wooden sword.

By the time he was 12-years-old, Hayashi began to drink, smoke and use drugs. He also joined one of the most violent gangs in the area. And, angry at God, he turned his back on his mother’s faith.

In time, he was kicked out of school and ran away from home. At the age of 15, he lived on the streets.

But then he was arrested for stealing a motorcycle.

In that moment, as he sat in the back of a police car, he felt as if God “tapped” on his heart, telling him, “Jonathan, I have a bigger plan for you – this is not what you’re supposed to be.”

Hayashi’s mother, determined to help her son, sent him to a missionary home in Tokyo where he was able to break ties with his past.

In Tokyo, he met Pastor Kawamata, who showed him genuine love and prayed for him. Moved by this love, Hayashi asked Pastor Kawamata why he was so different from other Christians he had known. In response, the pastor shared the Gospel, which penetrated his heart.

“I began to weep for the first time in my life,” Hayashi said. “So that night at age 16, I decided to confess Jesus Christ as Lord to the glory of God the Father.”

From that moment on, he began to change – even in his attitude toward his father. When he returned home, he asked for his father’s forgiveness. They said they loved each other and embraced one another. “Not only was I able to forgive my father,” he said, “but I was able to love him from the bottom of my heart.”

Hayashi also got a second chance at school. His mother enrolled him in a missionary school in Malaysia to finish high school. Then, growing in his desire to serve the Lord, he moved to the United States where he earned bachelor’s and master’s degrees at Moody Bible Institute.

There, he also met his wife Kennedi, who studied children’s ministry at Moody and currently serves as a part-time children’s director at their church. He and Kennedi have two young daughters, Kaede and Anna, and are also pursuing adoption of a young boy in Bulgaria.

His is the author of a discipleship-themed book, Ordinary Radicals, and this fall will complete his doctor of education degree at Southern Baptist Theological Seminary.

Looking back on his life, Hayashi expresses gratitude for his mother’s lifelong faithfulness to Christ.

“I praise God for my mother,” he said. “She was a prayer warrior.”

She often woke at 4 a.m. secretly to study Scripture and pray for her family. And in answer to her prayers, not only is Hayashi a faithful Christian today, but so also are his siblings. Moreover, his father also came to faith in Christ while reading the Gospel of John five years ago.

Hayashi also thanks God for the Southern Baptist missionaries who, funded by the Cooperative Program, went across the globe to Japan and led his mother to Christ.

“I believe in the Cooperative Program,” Hayashi said. “I wouldn’t be here if it weren’t for that.”