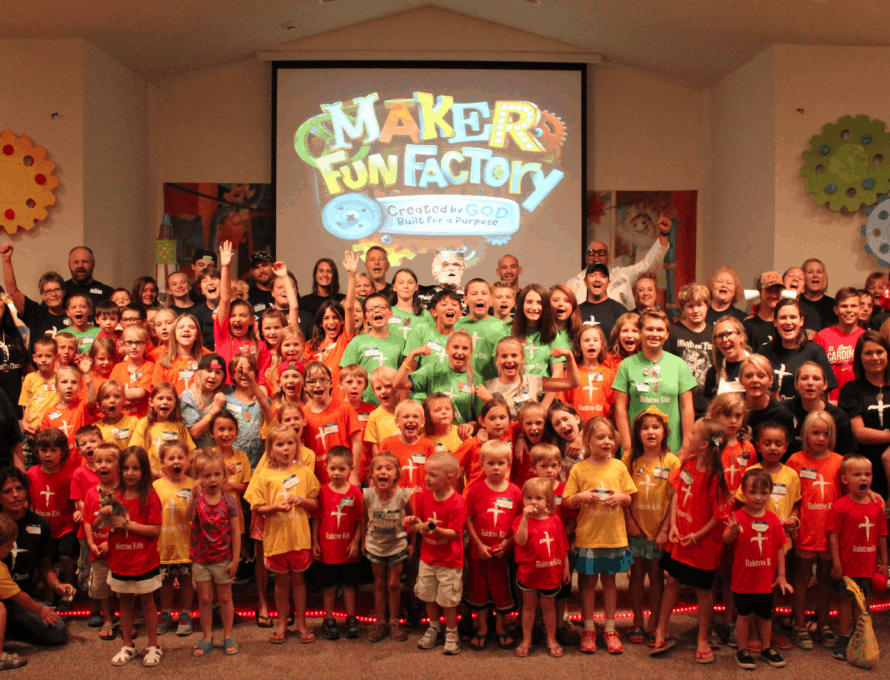 HILLSBORO – Raintree Church here has reached out to its community and seen lives transformed since coming into their current building 10 years ago. The growth of the MBC church plant can be seen in this Vacation Bible School photo from 2017. Submitted photo

HILLSBORO – In August, Raintree Baptist Church in Hillsboro celebrated ten years in their building. Larry Addison,  the Missouri Baptist Convention church planter who helped start Raintree Church, was invited to share the story of the beginning of the church fifteen years ago.

“Raintree was planted, not by human wisdom,” Addison said, “but by a series of events which can only be described as the hand of God.”

“The movement of God started back in the mid-70s.” Addison continued, “when Lillian Sims, talked with a friend who was one of the original developers of Raintree Plantation.  She convinced him to donate 6 acres of prime, flat land for the future of Raintree Baptist Church.”

The Jefferson Baptist Association acquired the title to the land and held the property in trust.  When Addison surrendered to full-time ministry in 2003, Bill Curp, then the director of missions at JBA, talked to him about planting Raintree.

“Prayer was critical to birthing a new church,” Addison said.  “Our guiding principle was Psalm 127:1, ‘Unless the Lord builds the house, they labor in vain who build it.’”

According to Addison, the church began in 2004 with eight families, meeting on the lower level of the Raintree Country Club.  In 2007, Kenny Sims, now pastor after Addison retired, joined the Raintree congregation as associate pastor/youth minister.

The church building was built during the summer of 2009.  Nailbenders, a group formed in Mississippi, volunteered to build the building.  Although the team began in Mississippi, the group expanded to include more than 300 volunteers from five denominations representing fifteen states.

“The building began on Memorial Day weekend,” Sims said, “and by August the church was finished.  Several area churches partnered with us to house the workers.  Several teams of the Nailbenders were sent for each stage of construction.”

Today, Raintree is making an impact on the community of Hillsboro.  “Our focus is on young families and children,” Sims said.  “In the ten years we’ve had our building, we’ve had 55 baptisms.”

Sims says lots of young families are moving into the Raintree community.  “We want to get the young people before the world gets them,” he said.  “Our VBS is designed for three days beginning on Wednesday, and then on Sunday, we have a Family Day.  We combine the last two VBS sessions into a sermon that will be meaningful to the children and not bore the adults.  After the worship service, we have fun and food for the families.”

According to Sims, the VBS average was 70 children per night.  His wife, Donna, serves as the children’s director.  In addition to VBS, the children are encouraged to attend association camps.

Raintree also partners with Hillsboro Public Schools and Child Evangelism Fellowship to present a Good News Club for the students.  “We’ve seen a ripple effect with the parents,” Sims said.  “As the children learn more, they want to know more.  This has been exciting for the parents and a few have come to church.”

Ministering to the parents has also become a priority.  “We are blessed to have a licensed Christian counselor in the congregation, so we are able to teach ‘How to be a godly parent’,” Sims said.  “After 6 or 8 weeks of parenting classes, we lead into Marriage Retreats.  Anyone can come to these retreats; we have newlyweds as well as seniors who have been married awhile.”

Raintree cooperates with the school district in several ways.  “We have a school supply ministry,” Sims said.  “We look at the school supply list and help the schools with the stocking of the extras.  This is especially important with the older students,” he said.  “The younger children have parents helping with those lists and the teenagers are more on their own.  We also give them gift cards to help when they run out of an item.”

Another impact on the community is participation with other churches of believers in the Fifth Quarter after the Hillsboro football games.  “We offer fun and food. We want to come together to let these kids know that we care about them.  In all our activities, we share the gospel.  We want to show we care, and the reason is because Jesus loves us, and we want to offer this love to them.

“We want to have a great impact on the community,” Sims said.  “If for some reason, we ceased to exist,” he said, “we would want the community to miss us.”