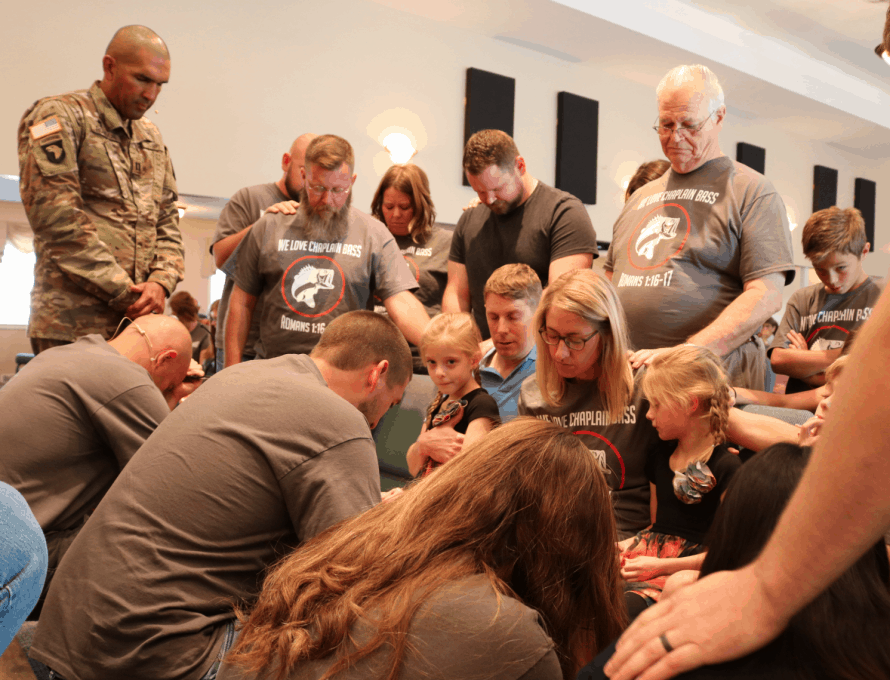 BOLIVAR – Clint Bass (center, in blue polo shirt) sits with his wife, Jackie, and their four children – G.T., Hillday, Verity and Clementine – as members of Southern Hills Baptist Church pray over them. The church commissioned Bass as a new Army chaplain during a special service, Sept. 15. The event’s featured speaker Capt. Jose Rondon (left), an Army chaplain at Fort Leonard Wood, also joined the congregation in this prayer of commissioning. Pathway photo by Benjamin Hawkins

BOLIVAR – Southern Hills Baptist Church commissioned one of its elders as a chaplain in the United States Army during a special service here, Sept. 15.

Clint Bass – a former professor at Southwest Baptist University (SBU) and, during the past nine years, a lay elder at Southern Hills Baptist Church – left Bolivar that afternoon for training to serve as an Army chaplain in Fort Campbell, Ky., with the second brigade in the 101st Airborne division. He’ll enter the ranks as a captain. Though this is his first stint in military service, Bass said his father previously served in the Army and later was a subcontractor with the military. As such, Bass attended a department of defense school in his early years.

Prior to the service, Bass expressed his gratitude for the church’s love and support.

“This is a wonderful church, and I can’t say enough about all the support I’ve received from them over the last nine months – the amount of meals, groceries dropped off, the amount of prayers and words of encouragement,” Bass said. “This is a very strong congregation, full of prayerful people.”

Bass added that he is “thankful for the opportunity to serve in the Army” as a chaplain.

Bass’s commissioning service featured an open-mic time, where church members – many of them dressed in “We Love Chaplain Bass” shirts – shared tearful words of love and encouragement for Bass and his family.

Also featured at the event was special guest speaker Captain Jose Rondon, a chaplain at Fort Leonard Wood who – as reported previously in The Pathway – has seen thousands of Army trainees and soldiers at his base profess faith in Christ during the past year.

Rondon challenged Bass and the members of Southern Hills not to lean on their own power, but instead to wait patiently and prayerfully for the movement of the Holy Spirit, who – as Christ promised in Acts 1:8 – empowers Christians to share the gospel around the globe. He also expressed his love for Bass, offering his help to the Bass family as they make their transition into military life.

Southern Hills Pastor Ted Bachman said Bass’s commissioning service was difficult. But he said it was also encouraging “to hear the testimony of our church family, SBU students, and the numerous SBU faculty and staff who speak of their love for Dr. Bass and his commitment for Jesus.”

“It was a joy to hear our congregation give testimony to God’s sustaining power as they pointed to Dr. Bass’ endurance in the faith and his shepherding influence in their lives,” Bachman said. “We celebrate and hope to imitate Dr. Bass’ example of reaching forward to God’s goal in Christ Jesus even as adversity presses against us. Lastly, our church celebrates the faithfulness of this pastor because we, by extension, have been given an opportunity to join in the spread of the gospel by releasing Dr. Bass to serve our King in the harvest fields of the United States Army.”