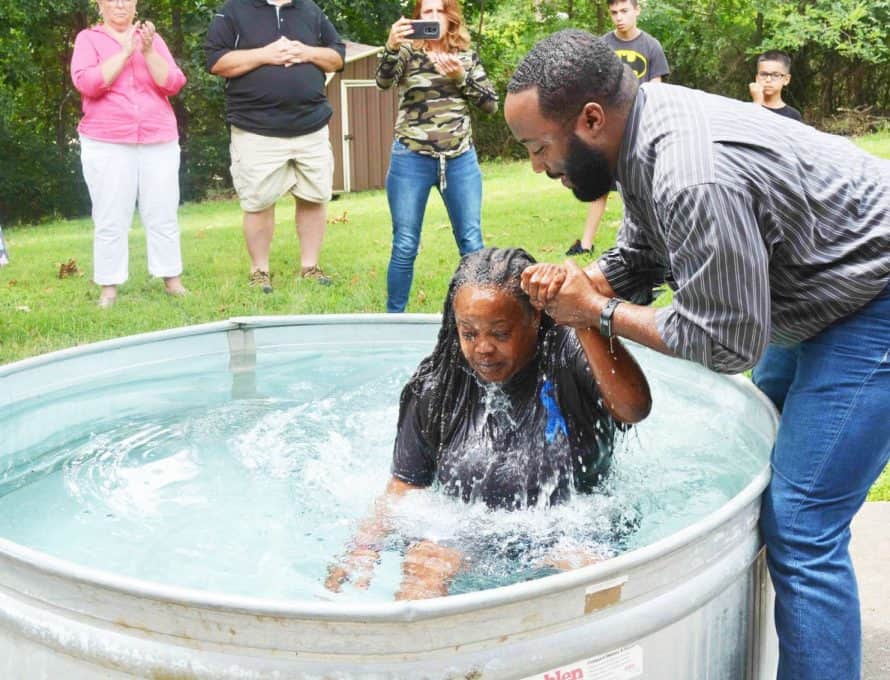 GREEN CITY – From northeast Missouri to the furtherest point in the southwestern corner of the state, baptistries, rivers, farm ponds and stock tanks were busy Sept. 8 as many churches took part in “Baptism Sunday.”

Though any day is a good day for a baptism, Sunday or no, Ronnie Floyd, president of the Southern Baptist Convention Executive Committee, asked Southern Baptist churches to do everything they can to have a special day for baptizing new believers in Jesus Christ. The goal is to “recapture the culture of the early church, where early believers were baptized immediately upon their response to trust and follow Jesus as their Lord,” he said.

Kris and Jill Hopkins so appreciated the gospel call at Christ Community Church in Huntersville, N.C., Sept. 8, they hugged pastor Ronnie Parrott and cried after their baptisms moments later.

“They were in tears and grateful that we cared enough about them to give them that opportunity to know Christ, to know the true Gospel and then to identify with Him through baptism,” Parrott told Baptist Press Monday.

The Hopkinses were among hundreds or more new believers who made professions of faith at Southern Baptist churches on Baptism Day and were baptized the same day, 15 of them at Christ Community Church. Baptisms ranged from 1 to more than 100 among several Southern Baptist congregations, according to reports to BP and on social media. Baptism Day is Sept. 8 on the Southern Baptist Convention Calendar.

“And in the New Testament, we see this happen every time someone gives their life to Christ,” Parrott said. “To follow the Lord in baptism is an important first step in following Christ, and we believe it’s important to do this regularly and often.”

Marshal Ausberry Sr. rearranged his church’s schedule Sunday to hold baptisms, an ordinance he normally observes on first Sundays, he told BP. At Antioch Baptist Church, the congregation Ausberry leads in Fairfax Station, Va., 10 new believers were baptized and four others were scheduled for baptism when family members can attend.

“As I reflect on Baptism Sunday,” he said, “I walked away thinking that it would be an awesome move of God if Baptism Sunday morphs beyond the SBC” into a nationwide event.

“A National Baptism Sunday movement would highlight the need for God’s people to be engaged in sharing our faith to a lost and dying world,” he said. “The purpose is not for another Hallmark card day, but to help God’s Church to stay focused on the main thing, winning souls to Christ.”

“Is there anything that should get us more excited?” Greear told BP after Baptism Day. “Jesus said there is more joy in heaven over one sinner that repents than over 99 that are already His.

“I was encouraged to see so many churches issue an intentional call to embrace the Lordship of Christ and express that through baptism!” Greear said. “May God give these churches grace to ensure these are not just converts but disciples.”

Churches prepared for the day, telling members of the event weeks in advance, buying clothing for new converts to wear during baptism, inviting guests and in some cases, training extra leaders to counsel new converts before baptism.

“We saw a woman give up her life of homosexuality,” Garcia told BP, “and we saw several who have come through addictions, anger, and abuse, all giving their lives to Christ.”

Many pastors posted photos and encouragement on various social media platforms, incorporating #FillTheTank or #BaptismSunday. Some baptized in lakes, rivers and creeks; others in baptismal pools.

“We (Holly Creek Baptist) baptized eight in the creek just a few minutes ago,” pastor Cory Hawkins tweeted @NachoAverageMan. “We have baptized three out of the past five Sundays. Still stoked about it … “

“It is important to highlight specific moments where you call people to respond to the Gospel and make commitments to Christ,” Rice told BP Monday. “There are many ways to do this, but the idea of calling people to a response and a decision is an important part of proclaiming the Gospel.”

Editor’s Note: This the revised version of a Baptist Press article by Diane Chandler.