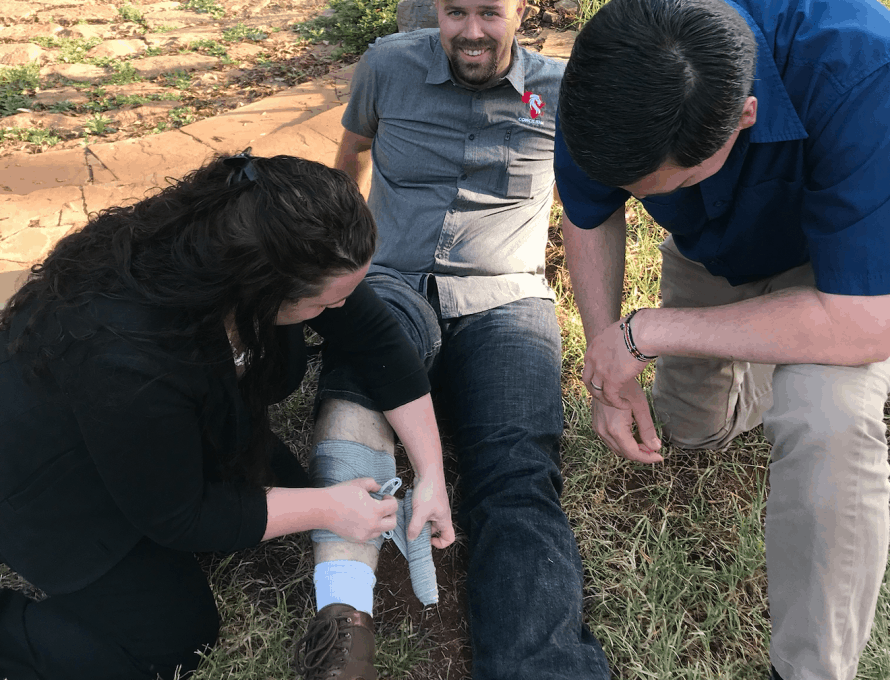 EXCELSIOR SPRINGS – Hiram Jobes (center), the Africa Director for Concilium, Inc., plays the role of an injured person during one of the missions safety trainings organized by Concilium. Photo courtesy of Scott Brawner

EXCELSIOR SPRINGS – Missouri Baptist churches have an opportunity to equip themselves for fulfilling the Great Commission through the help of Concilium, Inc., a Kansas City-based organization that provides training for missionary efforts across the globe.

Pisgah Baptist Church here will host one such training event, Sept. 28. Registration for this “Travel Safety Orientation” is $50. To register or to learn more, visit www.concilium.us/TSO.

Scott Brawner, a Missouri Baptist, is co-founder and president of Concilium. Formerly, he was executive director of Fusion, a missions training program for young men and women on the campus of Midwestern Baptist Theological Seminary. Prior to this, he served as director of risk management with the International Mission Board (IMB), as a state missionary with the Missouri Baptist Convention, and as a sniper and team medic with the United States Army’s First Ranger Battalion during Operation Desert Storm.

According to the organization’s website, Concilium exists “to build capacity and resilience into Gospel advance so others may hear and live” and to build “sustainability and longevity into global mission.” The organization provides five training options, from the one-day “Travel Safety Orientation” to a three-and-a-half-day “CAST-Field Security Course” that includes training in first aid, active shooter scenarios and “extended immersion experiences.” Information about these courses and other resources are available at www.concilium.us.

Pastor Doug Richey of Pisgah Baptist Church, has seen the value of this kind of training and missions-readiness firsthand. Several years ago, he said, an international incident could have wrecked the work of a mission team from his church. Flights were cancelled; the mission team was “bounced all over Europe” from one airport to another; team members were hungry, tired and unable to speak the local languages.

“There were some very significant challenges,” Richey said, “but because we had (trained for) those worst-case scenarios and planned with redundancies in place and with phone numbers that we would be calling for things of that nature, we were able to actually go through all of that without having anybody fall apart.”

More importantly, the mission team was able to display the love of Christ amid difficult circumstances, and they finally arrived on the mission field with the energy and in the mindset to proclaim the gospel. Despite Satan’s attempt to derail their efforts, they stood firm because of their training and preparation.

But too often, Brawner told The Pathway, Christians go on mission trips across the globe without preparing for situations that could hamper – or even waylay – their mission efforts. Recently, he spoke to 250 university students training for overseas trips. Calling some students to the front, he asked them to locate on a map the countries where they would serve. They weren’t able to find them. And, according to Brawner, this is not uncommon.

“There are people getting on airplanes right now in the name of Jesus,” he said, “flying to a country they cannot find on a map to engage with the gospel people that they cannot say ‘hello’ to in their heart language.  … Their hearts are all in the mission, but they’re not equipped for the work ahead.”

Concilium exists, he added, to equip people for the mission, to “build resilience for the voice and the presence of the gospel.” And, since God’s enemies look for opportunities to disrupt the mission, watchfulness and resilience are indeed necessary. Not only must mission teams prepare to face “persecution” for proclaiming the gospel, but even more often they must prepare for forms of “victimization” that could come to any international traveler.

The Bible teaches Christians to “bear up under” and even rejoice amid persecution, but “it teaches you to avoid victimization,” Brawner explained.

But what does avoiding victimization look like? Brawner mentioned a few examples: It may mean knowing how to act and what to say when going through customs. It may mean carrying wallets and other valuables in a way – and dressing in a way – that does not attract the attention of thieves. It may mean knowing what food and water should be avoided, so as to prevent illness. It may also mean being wise about what vehicles to use and about who should drive. (Most missionary deaths, Brawner noted, occur not because of persecution or terrorism, but because of car accidents. Many of these deaths occurred when mission team members tried to drive or ride on a motorcycle without any safety gear.)

In some of these scenarios, “victimization” means loss of life or goods. In all of them, it means that the mission team’s ability to share the gospel is hindered or ruined. But with training, mission teams can learn how to avoid such “victimization” – for the sake of proclaiming the gospel.

“We’re never told not to risk,” Brawner said. “We will never complete the Great Commission if we don’t risk. But we’re told to be wise, so that we can avoid victimization and yet bear up under persecution. That’s the aim of good security training.”