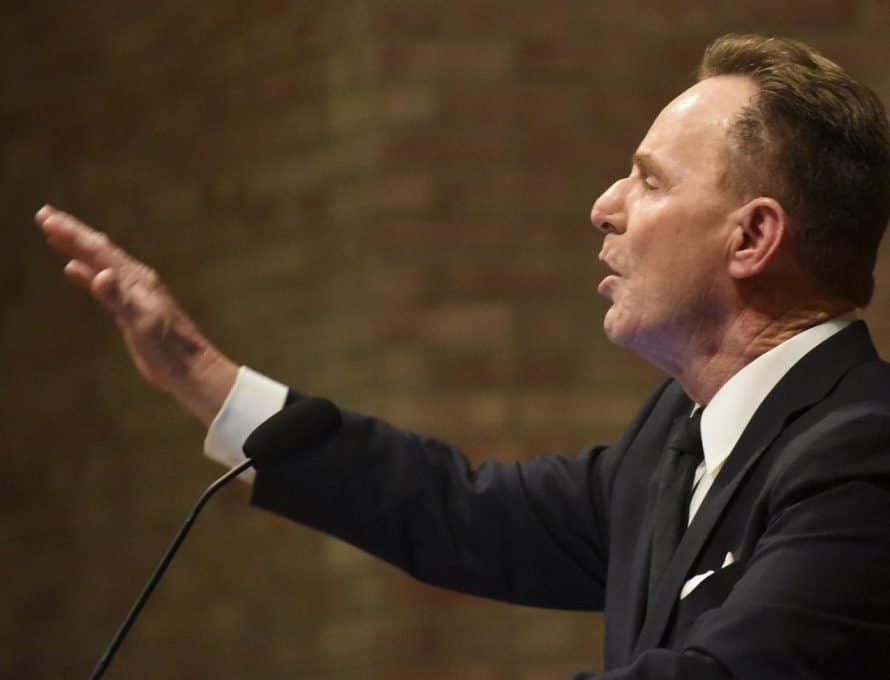 "God has blessed us greatly," said Ronnie Floyd, president and CEO of the Southern Baptist Convention Executive Committee, during his inauguration service on Monday (Sept. 16) at First Baptist Church, Nashville. "We must rise up." Photo by Morris Abernathy

NASHVILLE (BP) – At more than 47,000 churches strong, Southern Baptists can have a massive spiritual footprint — they just have to harness the power of prayer and their resources for the sake of the Gospel, Ronnie Floyd said.

“God has blessed us greatly,” said the new president and CEO of the Southern Baptist Convention Executive Committee. “We must rise up.”

Floyd sounded that clarion call Sept. 16 at the end of his inauguration service. He told the crowd of several hundred Southern Baptist leaders gathered at First Baptist Church, Nashville, that prayer, unity and a hyper-focus on missions were necessary to finish the task.

“I believe God wants me to call upon and to help mobilize a convention of churches and millions of Christians who have massive resources to do one thing — we must reach every person for Jesus in every town, in every city, in every nation and every country across this world,” Floyd said.

Earlier that evening, Ted Traylor, pastor of Olive Baptist Church, Pensacola, Fla., had told the crowd that in the days leading up to the service, he had called some pastors back in his small hometown in Alabama and asked what they would want from a new SBC leader.

“I heard one word over and over — unity. Unify us,” Traylor said.

Floyd said he is calling the SBC to exactly that — to show “this crazy world” a people of God who are overflowing with love, not given to online attacks and dissension. That kind of love plus prayer and a sacrificial use of resources is how the task will be completed, he said.

He asked Southern Baptists to “leverage your life and resources for this mission.”

“I am humbly calling every pastor to prioritize, elevate and accelerate their giving through our Cooperative Program, which is the financial fuel for all we do,” Floyd said. “We can do more together than we could ever do alone.”

During the inauguration service, pastors and leaders from every level of Southern Baptist life prayed for Floyd and challenged him to lead the convention into gospel unity. Several speakers, including his son, Nick, acknowledged Floyd’s “epic wake-up times,” or how he customarily gets up at 3 a.m. to pray. Nick took over the role as senior pastor of Cross Church of northwest Arkansas, where his father previously served for nearly 33 years.

“I’m thankful I heard my dad preach a sermon on Sunday and then live it Monday through Saturday,” he said.

Johnny Hunt, senior vice president of evangelism and leadership for the North American Mission Board, said it’s Floyd’s decades-long habit of meeting with God that inspires Southern Baptists to trust him as a “man of consecration” in addition to being a man with strong giftings in both administration and vision.

Hunt said that for more than 20 years, he’s believed Floyd to be the greatest administrative pastor in the SBC. But, he said, Floyd’s walk with God and sensitivity to His voice will be even more critical “for such a time as this.”

“We’re believing that you’re going to pray and hear from our heavenly Father,” Hunt said. “We trust your time with the Lord.”

Kathy Litton, NAMB’s director of planter spouse development, served at Cross Church in years past and said that for the staff, working with Floyd was a “constant lesson on leadership, vision and strategy.”

“Few will ever work harder or with more passion than Ronnie,” she said.

But not only that — Litton said Southern Baptists are getting a double blessing in Floyd’s wife, Jeana.

“She is deeply admired and beloved by the Cross Church family,” Litton said. “She has always been heavily involved and invested as a pastor’s wife.”

Even in the Floyds’ process of deciphering the call to Nashville, “she was deeply and personally convictional about hearing and obeying the voice of God to leave a place that was dear to her heart,” Litton said.

“She is a woman who pursues God and displays a hunger for Him.”

Floyd said his family is committed to staying connected to Christ.

“Southern Baptists, I commit to you that from before the sun comes up every morning until exhausted from the day, I will give my life to finish the task,” Floyd said. “Let us begin to finish this great task, whatever the cost, whatever the risk. This worldwide mission thrust must be our priority.”