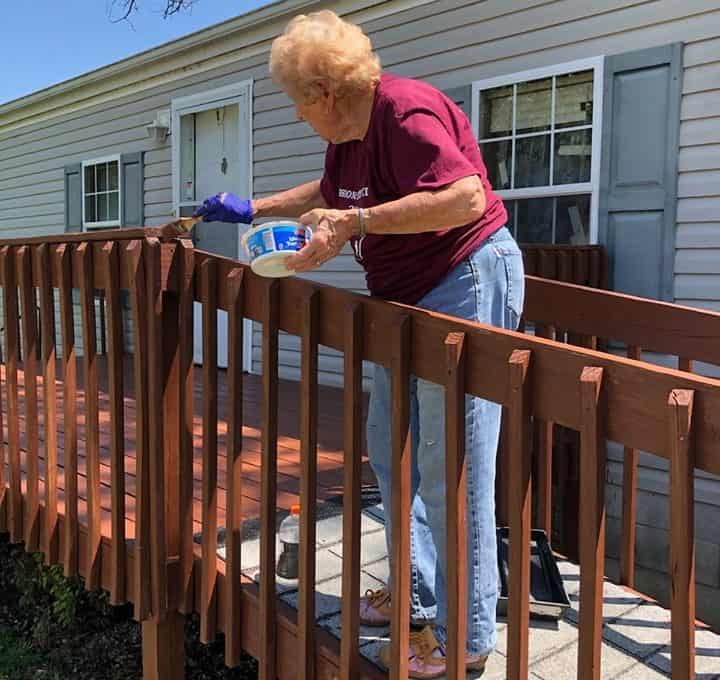 LOWRY CITY – A member of the First Baptist Church here helps to serve the community as a part of the church’s “Mission: Lowry City” initiative. Submitted photo

Lowry City, population 640, is located mid-way between Kansas City and Springfield on Highway 13. The church, which averages around 80 in worship, placed ads on Facebook and in area newspapers offering to do home repair projects at no cost to the community.

“The response was amazing,” said Pastor Jeff Ferguson. “In just 5 days we completed repair projects in 18 different homes in and around St. Clair County. Everything from installing handicap ramps to repainting homes to doing a complete bathroom remodel.” On Thursday night the church hosted an appreciation dinner for the home owners to say thank you for allowing the church to be a part of their lives. The primary purpose of the week was not home fix-up, but getting the gospel of Christ out into the community. This was accomplished by members personally sharing with the homeowners and by a planned distribution of over 330 gospel outreach bags delivered to every home in Lowry City. “For our door-to-door outreach, we partnered with the Saturate USA. They provided free DVDs of the Jesus film, bags, and literature. All they required of us is that we deliver the materials and include follow-up information on our church so home owners can learn about us and get in contact with us. We divided into seven home teams and had all 330 bags distributed by noon,” Ferguson added.

“Our church was typical of so many SBC churches, we ‘did missions’ by supporting our Association and Camp, and by giving to offerings like the Rheubin L. South, Annie Armstrong and Lottie Moon offerings, but we were not ‘doing missions,’” Ferguson explained. A lot has changed in the church’s approach to missions. “The shift in mission philosophy, from teaching about missions to doing missions really began in 2006 when we started our Awana Bible Club children’s ministry. I asked the church to give up their Sunday night service time and use it to reach area children. They were willing. In fact, we had 16 men commit to serving in Awana that first year.”

The Bible club currently runs between 35 and 50 children now. The Awana success was followed in 2009 when the church did its first mission trip when over 20 members went to aid victims of the Greensburg, Kansas F-5 tornado.

“Becky Hyke, a member and an area high school science teacher, had the vision to organize our first out of the area gospel mission effort to Greensburg, Kansas. The trip was challenging on many levels as we had a lot to learn, but we were well received by the community there when we went door-to-door with gospel tracts on our last day there. Residents there had seen us laboring all week in our First Baptist Lowry City safety green t-shirts all week and we had earned their respect.”

Since 2009 the church has travelled to Georgia and Colorado twice, Kentucky, and numerous locations around Missouri doing construction, VBS, and home repair ministry. In 2018, First Baptist Lowry City took 34 members to Houston, Texas and spent a week rebuilding homes that were still unlivable a year after Hurricane Harvey struck the Gulf Coast. “These home owners were overwhelmed, still living with relatives or in RV’s a year later and needed someone to come alongside them and help,” Ferguson stated.

Ferguson said one reason everyone can participate in these efforts is they have made Prayer Walking an integral part of the week. Teams divide up and walk the streets praying and more often than not get opportunities to connect with the community where they are ministering.

Becky Hyke now serves as the church’s Missions Coordinator and is responsible for putting projects together which involves developing a master list of jobs and keeping track of repair teams, locations and job progress.

Ferguson concluded, “It is really touching to learn the stories of those we come in contact with through our efforts. This year’s outreach saw our church family minister to two widows that recently lost their husbands, a woman with cancer caring for her daughter who had suffered a stroke, and an Army veteran who is an amputee that needed assistance with a handicap access ramp, just to name a few.”