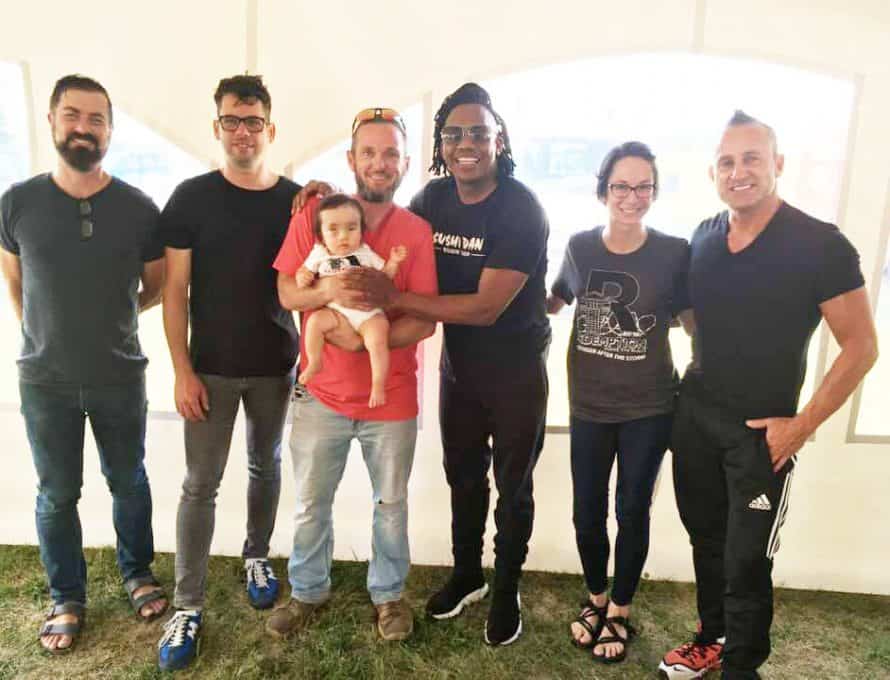 JEFFERSON CITY – Baby Leah Hargrove – along with her parents Jeff (third from left) and Kelli (second from right) – met the Christian band Newsboys during an evangelistic event inspired by Baby Leah. Submitted photo

CENTERTOWN – The love of New Hope Baptist Church members here for one of its families resulted, Aug. 17, in an evangelistic revival meeting in Jefferson City, featuring the well-known Christian band, Newsboys. The event not only benefitted a baby girl born with special needs, but it also celebrated community heroes who stood in the gap after an EF-3 tornado hit Jefferson City and other nearby towns, May 22.

A longtime member of New Hope Baptist envisioned the event, “Redemption Inside the Walls,” after she heard about the plight of one family in the church. Baby Leah, the daughter of Jeff and Kelli Hargrove, was born at the Mayo clinic in Rochester, Minn., on May 29, 2018. According to a GoFundMe page dedicated to her, she was diagnosed “with Tessier facial cleft #4, cleft lip, orbital cleft palate, total nasal occlusion, micropthalmia, anopthalmia, and hearing impairment. One of Leah’s eyes did not develop and the other has a hole in the optic nerve.

“Leah has endured multiple procedures and surgeries during her first year of life,” according to the webpage, which added that “with the latest technology and skilled, gifted physicians, most of her anomalies are correctable.”

Nevertheless, Baby Leah’s health needs created a financial burden for the Hargrove family. For that reason, various New Hope Baptist church members decided to help – including Paula Benne, who first envisioned “Redemption Inside the Walls.” She thought the event could raise money for Baby Leah’s Trust Fund, while also creating an opportunity for the gospel to be presented to men and women in the Jefferson City region.

“The event, for all I’ve heard, went extremely well. It exceeded our expectations. … We are going to be able to provide a nice check for Leah’s trust fund,” Benne told The Pathway. Most importantly, she added, an estimated 50 people or more professed faith in Christ during an altar call at the event.

Talking about Baby Leah, Benne – who has been dubbed by the family as “Aunt Paula” – said, “She is the sweetest little girl. Before she is two years old, she has already brought 50 souls to Christ, and that is amazing. God told me she was going to be special, and she is.”

Even before seeing the impact of “Redemption Inside the Walls,” Baby Leah’s father, Jeff, shared his excitement about the evening.

“It’s awesome that Leah was the inspiration behind this,” he told The Pathway shortly before the event started. “It’s awesome to be part of this, but it’s humbling.”

Jeff shared that it’s impossible to describe all that his family has been through since Leah was born. “But it’s been a blessing, truly. I know nothing else; she’s our first child,” he said. “And I’m just happy to provide what we can to give her the best life that she can have.” He added that Pastor Dennis Maxwell and the members of New Hope Baptist Church “have been a rock.”

“They’ve gone above and beyond what I would expect of any church,” he said. “With your church family and with the Lord, anything is possible. It has really strengthened my faith through all of this.”

“Redemption Inside the Walls,” was initially intended to take place within the Missouri State Penitentiary, a historic location popular to tourists who come through the state’s capital city. But plans changed after the May 22 tornado demolished portions of the old prison and closed it down. So, organizers moved the event to the Jefferson City Fairgrounds, and, instead of changing the name, they simply added the tagline, “Stronger after the Storm.”

They also decided to celebrate heroes who helped the community stand strong amid chaos and destruction caused by the tornado. Benne said that, during the event, 19 heroes were recognized. Each of them received a plaque cut from a tree that had fallen during the storm.

At least one Missouri Baptist church member was recognized as a hero during the event: namely, Doug Schrimpf, owner of Doug Schrimpf Construction. In years past, Schrimpf’s construction company erected the building of Union Hill Baptist Church, Holts Summit, where he and his wife are currently members. Schrimpf suffered loss when a shed full of tools – gathered over 40 years of construction work – was destroyed by the tornado; nevertheless, after the storm hit Jefferson City, he labored to help others in the community.