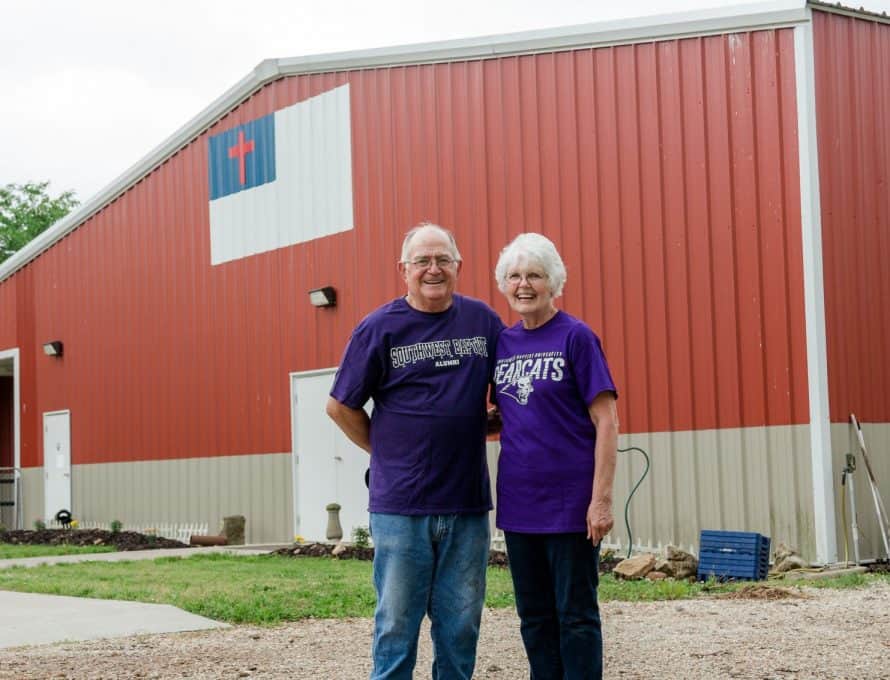 ELDON – Dan Duckworth, a 1978 Southwest Baptist University alumnus, and his wife, Marylin, saw a need to help feed people in the community where Dan has pastored since 1977 at Rocky Mount Baptist Church here.

A food pantry that began in the basement of the small rural church 22 years ago now has its own 6,400-square-foot facility. Visions Unlimited Food Pantry works with the Food Bank for Northeast and Central Missouri in Columbia to distribute food within a four-county area to about 1,000 people each month.

“The Lord has opened the door for us to have quite a ministry,” said Dan, who was a 2018 recipient of SBU’s Life Service Award.

Perhaps what brings them the greatest joy is sharing the story of God’s faithfulness that is evident in nearly every inch of the food pantry facility:

• A grant paid for the building, concrete and pipes for the floor heat.

• Many of the kitchen fixtures and equipment were donated, including a refurbished double oven that was exactly what Marylin had dreamed of having for the kitchen space that is used for preparing meals for volunteers.

“Most of the stuff we have has been donated to us,” Dan said. “We make use of everything we have.”

And they often wonder what the Lord has in store next for Visions Unlimited.

“He said I’m going to give you everything. The building. Food. Volunteers,” Marylin said. “All you have to do is put it all together.”

They also take any opportunity they can to visit with people and share the Gospel with them while they are waiting to receive their food. On Wednesday nights, church members pray over the prayer requests that are left in a box at the food pantry.

Proverbs 29:18 — “Where there is no vision, the people perish” — is the inspiration for the Visions Unlimited Food Pantry and for the Proverbs 29:18 Scholarship the church established at Southwest Baptist University.

Dan began pastoring the church before graduating from Southwest Baptist College, one of four generations to attend SWBC/SBU. He wanted to establish the scholarship fund to help students who are entering the ministry graduate with a stronger financial footing.

“I remember what it was like when Marylin and I first went to Bolivar,” he said. “When we crossed the city limit sign, Marylin said, ‘I have never felt such peace in all my life.’”

“We had no home and no job, and we had two little girls,” Marylin added. “We didn’t want to leave Bolivar. We were where we needed to be.”

Marylin worked for 32 ½ years as a school secretary, and Dan has been self-employed in construction — skills that have come in very handy for the many construction projects he has completed inside the Visions Unlimited building.