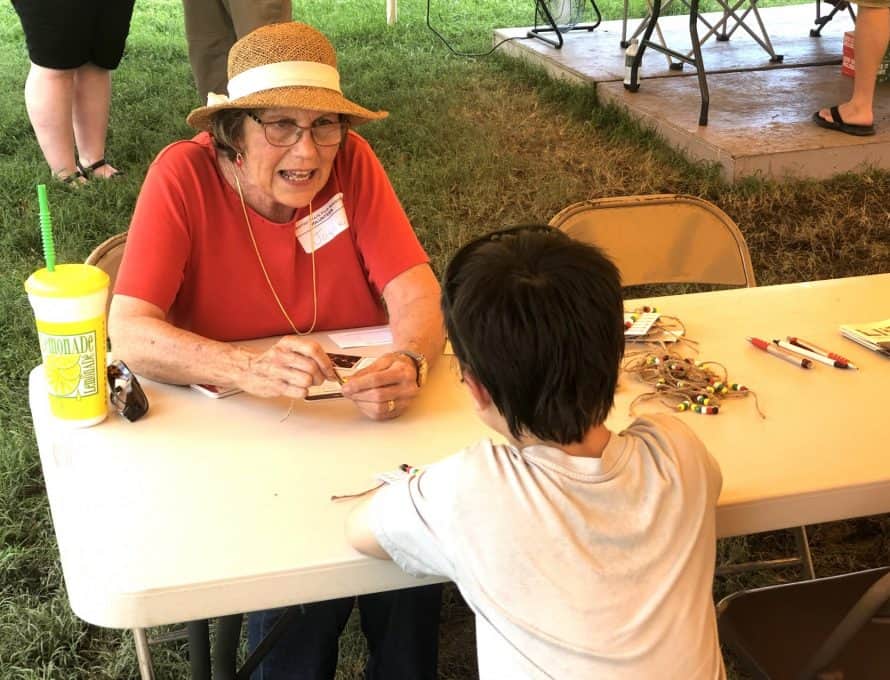 SEDALIA – Joyce Nichols of Calvary Baptist Church, Sedalia, shows a young fair attender the story of the Gospel using a color bead bracelet as she volunteered in the Baptist tent at the Missouri State Fair. Pathway photo by Brian Koonce

SEDALIA – Forty individuals prayed to receive Christ at the Baptist tent at the Missouri state fair.  The invitation to step inside the colorful tent on Main Street at the fairgrounds, was followed by a promise, “This will just take three minutes of your time.”

Volunteers then had three quick minutes to welcome fair attenders to the Baptist tent and then to share their testimony of how they became believers in Jesus.  At the end of the three minutes they would ask, “Has anything like this ever happened to you?”  Answers were mixed and some just wanted to register for the giveaway prize, a gift card for one of eight major retailers.

But some were willing to extend the conversation and hear how they could become believers in Jesus.  Forty people prayed to be saved.  And there were nine who made recommitments to the Lord and six more wanted to get more information about a church in their community.

Organizers of the state fair ministry will contact pastors in the hometowns of all of the above and encourage them to make contact with the prospects for their church and follow up on their decisions.

The ministry is sponsored by the Missouri Baptist Director of Missions Fellowship. They receive funding from contributing associations, from churches, individuals and from the MBC Missouri Missions Offering.

Twenty-four associations, churches and ministry organizations sent teams to the fairgrounds to staff the tent.  The tent is supervised and staffed by Missouri directors of missions (DOM) and teams from their associations.  The Missouri Baptist Convention staff also took a shift as well as a crew of MBC disaster relief workers.

One of the volunteers was Carolyn Calton, of Calvary Baptist Church, Sedalia.  This was her first year to work in the Baptist tent, although she has worked in other ministries on the fairgrounds.  She is a retired postmaster from Fortuna.  There she said she had opportunity to share Christ with people who came into the Post Office lobby and with some of the mail carriers who worked out of the office. She won some of them to Christ.

Calton said, “I love to tell people about Christ.” And it seemed obvious that she did because she led four people to Christ in a morning shift at the tent.  “It’s all God,” she said, pointing upward.  “I just want to be used of God.”

First- time ministry volunteer Steve Williams, DOM of Ozark Prairie Association, was inviting people to come into the tent. He said  “You never know who will accept the invitation to come in.”

He said his biggest surprise was how many people would walk back and forth in front of the tent multiple times.

“I think people are more apprehensive to talk to us. It could be the culture. People are not interested in religious matters.”

Calton said she thought working in the tent was easier than she thought it would be. “Someone will help you.  I prayed (before I came) and went over some Scriptures to be sure I knew how to do it.”

Another fair visitor was Missouri native, Penny Staley who stepped in the tent with her son and her husband, Chaplain (Colonel) Allen Staley of the United States Army.  Stationed at Fort Bliss, El Paso, Texas, Chaplain Staley and his wife met at Southwest Baptist College (now University) in the late 1970’s.  They stopped in at the fair while on vacation, visiting family in Mrs. Staley’s hometown, Green Ridge, just southeast of Sedalia.

Chaplain Staley said he thought it was a “good location with lots of people available.”

“The person out front was trying encourage people, trying to share Christ,” he said.

Chaplain and Mrs. Staley have served the U.S. Army all over the world, including duties at Ft. Hood, Texas; Ft. Leavenworth, Kansas, Walter Reed Medical Center in Washington, D.C., and overseas deployments to Korea, Italy and Iraq.

Chaplain Staley said he has been pleased to be a Southern Baptist “missionary” to the U.S. Army, and they are proud to have served nearly 29 years in the reserves and active Army duties.  He is a commissioned SBC Chaplain.

At the conclusion of the fair ministry, Robert Sisney, DOM of Harmony Baptist Association, Sedalia, drew out the three winning cards from a plastic box.  A $1,000 gift card along with a $500 and $250 card were sent to the three winning registrants.

State fair ministry officials were grateful for the 220 volunteers who drove to Sedalia from all over the state.  The gospel was presented 1,020 times.