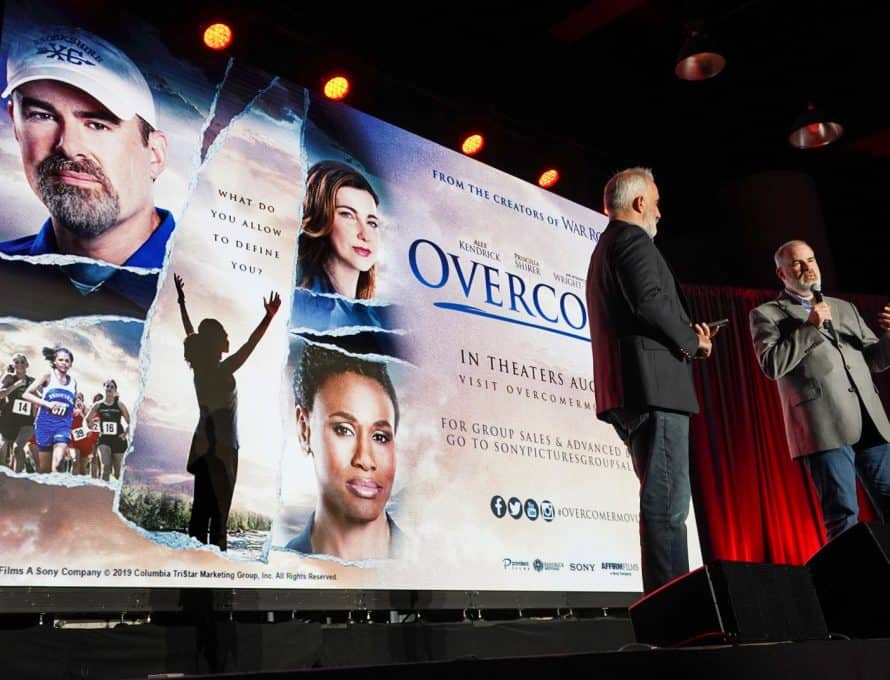 Alex Kendrick (right) and his brother, Stephen, explain the message of their newest film "Overcomer" prior to a private screening June 11 for attendees of the Southern Baptist Convention annual meeting in Birmingham. Photo by Matt Miller

Their movies “Fireproof” (2008) and “Courageous” (2011) both opened in the Top 4. Their 2015 movie “War Room” climbed to No. 1 in America on its second weekend. They’ve been interviewed by big-city newspapers and broadcast networks.

But they don’t judge the success of their movies solely on box-office numbers or public relations victories. They judge success, Stephen Kendrick said, by a movie’s spiritual impact.

“One person coming to Christ is better than 10 Academy Awards,” he told Baptist Press.

The Kendricks are applying the same standard to their new movie “Overcomer” (PG), which is in theaters now and asks moviegoers to consider the question: What do you allow to define you? Yes, they want “Overcomer” to do well at the box office. But that’s because it will increase the number of moviegoers impacted.

“People often say, ‘You guys have an agenda when you’re making this movie.’ Yes, absolutely — the Great Commission is our agenda,” Stephen Kendrick added. “We’re unapologetic about it. I’m not going to stand before God and Him say, ‘Did you get an Academy Award?’”

“Overcomer” tells the story of a workaholic boys’ basketball coach, John Harrison, whose team is depleted when a large company closes and families move out of town. John grows depressed, knowing a state championship is no longer within reach and his identity as a successful coach is gone. Things get worse when he is told to coach the cross-country team, which has only one runner, Hannah, a quiet girl who is searching for her identity in life, too.

Christians, the Kendricks said, too often follow the world’s lead in finding their identity. Many men and women find identity in their job. For others, it’s found in — for example — family, friends, finances, sports and beauty.

“It is our tendency to find our identity in what our positions are, what our accomplishments are, what other people are saying about us,” Stephen Kendrick said. “People become workaholics to try to prove themselves, because they’re trying to find their identity in something besides Christ.”

Placing one’s identity in worldly things is not only unbiblical, the Kendricks said, but it also will lead to disaster in life.

Stephen called it a “core issue” that’s “shouting to us from the Word of God.” Alex agreed.

“In a day and age when the culture is debating identity, we must ask: Who gets to define who we are? Is it your feelings? Is it your circumstances or what culture is saying? The Creator gets to define his creation,” Alex said. “… He has the authority to define us and He knows this better than we know ourselves.”

It will be the sixth film for the Kendricks, whose first movie, “Flywheel” (2003), was made on a shoestring budget using video equipment that has been surpassed by what is found in most iPhones.

It’s safe to say they’ve come a long way since that film 16 years ago. “Overcomer” has the biggest budget of any of their films. (The figure hasn’t been disclosed.) It has the best cameras and the best lights they’ve used, too.

“We do believe that this is our best film when it comes to the production values,” Stephen said.

The brothers’ filmmaking ministry is unique, yes, but it’s “the arena God’s put us in,” Alex said. It’s also allowed them to reach millions of people with the Gospel without leaving their state.

“We’re excited to see what God does with this one,” Alex said. “It’s been a pretty long year and a half for us. We hope that God does something with it that blows our minds.”