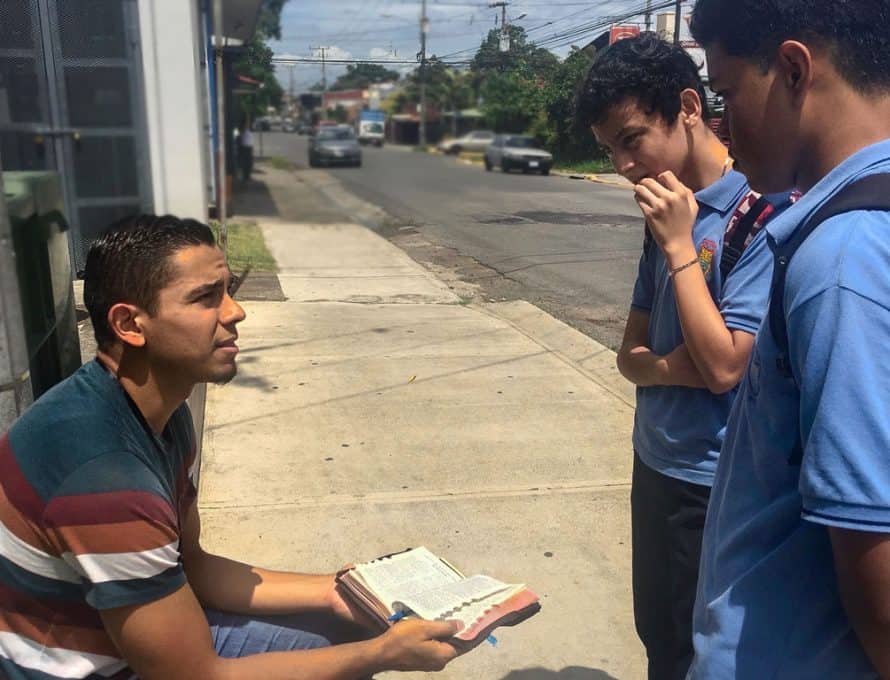 COSTA RICA – Luis shares the gospel with Costa Rican youth. He feels called to take the gospel to an unreached people group and to mobilize the Costa Rican church to catch the same vision. (IMB Photo)

COSTA RICA (IMB) — International Mission Board (IMB) missionaries Jeff and Lori Herrington met Costa Rican believer Luis when he took on a leadership role in their local church. Like the biblical Timothy, Luis was deeply influenced by the faith of his grandmother and became a Christian when he was 11 years old.

But it was in his post-high school years that 22-year-old Luis began to really understand what it means to walk closely with the Lord. He pursued the Lord in earnest.

Now, Luis attends seminary, and the Herringtons disciple him in his faith. He also is faithfully serving on their IMB team, which helps equip Costa Rican churches and trains U.S. churches just getting started in international missions endeavors.

One of the Herringtons’ greatest joys is seeing Luis grow in his passion for the gospel and taking it to the lost.

“Since learning about unreached, unengaged people groups around the world, he is continually putting before his Costa Rican brothers and sisters the need to go to hard places so that all would have the opportunity to hear the truth, as well as considering the cost it could mean for him personally,” Lori said.

Luis has a vision for both taking the gospel to unreached peoples and returning to mobilize Costa Ricans to engage in healthy missions involvement.

“We are so thankful for the partnership we have in the gospel with Luis and look forward to seeing how God will use him in powerful ways for the kingdom,” Lori shared.

Your gifts through the Cooperative Program and the Lottie Moon Christmas Offering® make it possible for the Herringtons to live in Costa Rica where they can partner with Luis to expand local believers’ gospel witness. Thank you for giving.

Learn more about the American peoples.