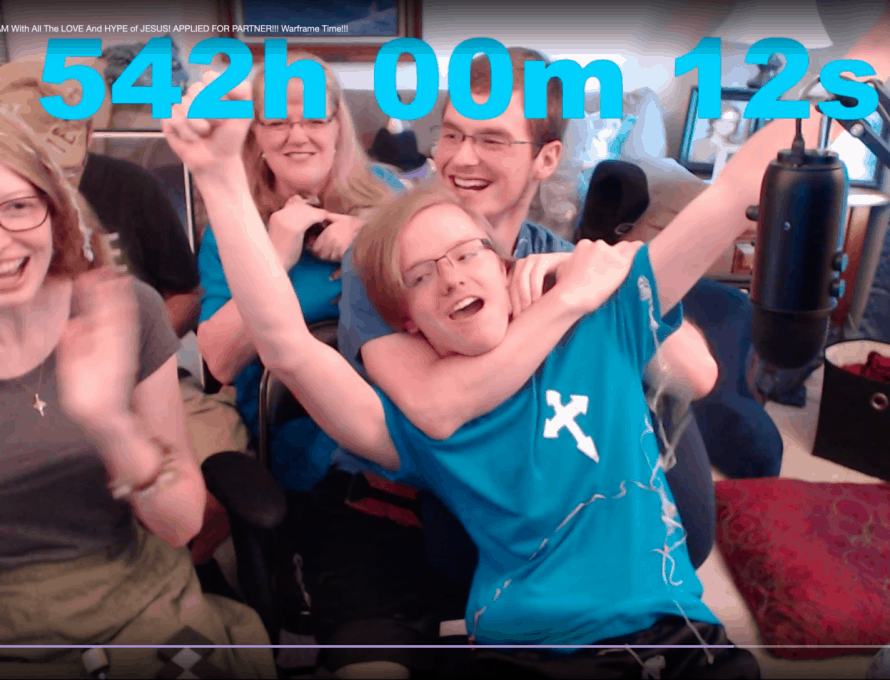 WENTZVILLE – Joshua Greening hugs his brother, Daniel, as they celebrate with friends and family their world record breaking broadcast.crossing the 542-hour mark July 31. The brothers use their channel, TheWay_TV, as a ministry tool, and now hold the record for the most time spent streaming in a month. Twitch screen capture

WENTZVILLE – 662 hours, 7 minutes and 48 seconds. That how much time the Greenings spent in front of video games in the last 30 days. That’s more than 22 hours of every day. You may think you play a lot of video games, or perhaps know someone who spends just a little bit too much time in front of their PC or PlayStation, but you haven’t met the Greening Brothers. Make that, the World Record-Holding Greening Brothers.

Joshua, 20, and Daniel, 17, are members of First Baptist, Wentzville. They’re also streamers on the online platform Twitch, where they host an ongoing show they call “TheWay_TV.” (www.twitch.tv/theway_tv ) While broadcasting, they play the latest titles in the video game world and talk back and forth with those watching the stream. But they’re not in it just to mash buttons or zone out for hours of mindless entertainment; they use the platform as a ministry and a way to “hype” Jesus and weave the gospel into their gameplay.

They strive to keep their online community clean, and positive, pointing to Jesus and giving God the glory at every turn. It’s not a church, but it’s a way for the brothers to show their peers – the vast majority of them they will never meet in person – that Jesus loves them.

And the need in that slice of the population is great. It may not seem like a big crowd to the uninitiated, but Twitch is a massive platform. It is the 26th most popular website in the entire world, and the 13th most popular in the U.S. More than 15 million people watch Twitch each day with an average of 54,500 Twitch channels live at any time.

And though TheWay_TV is just one of those channels, and they’ve only been at it a little over a year, the Greenings can now claim the world record for most time spent streaming in a single month. The previous record over a 30-day span was 541 hours, and the Greenings tag-teamed to smash that record by 121 hours – five full days of gaming from July 8 to Aug. 8. During that last day alone, they spent 9.2 hours playing Warframe, 4.7 playing League of Legends, 3.9 hours playing Mega Man and more. During the 30-day stretch, they saw their viewers at any given moment triple. Viewers logged more than nearly 56,000 hours watching them playing and share the gospel.