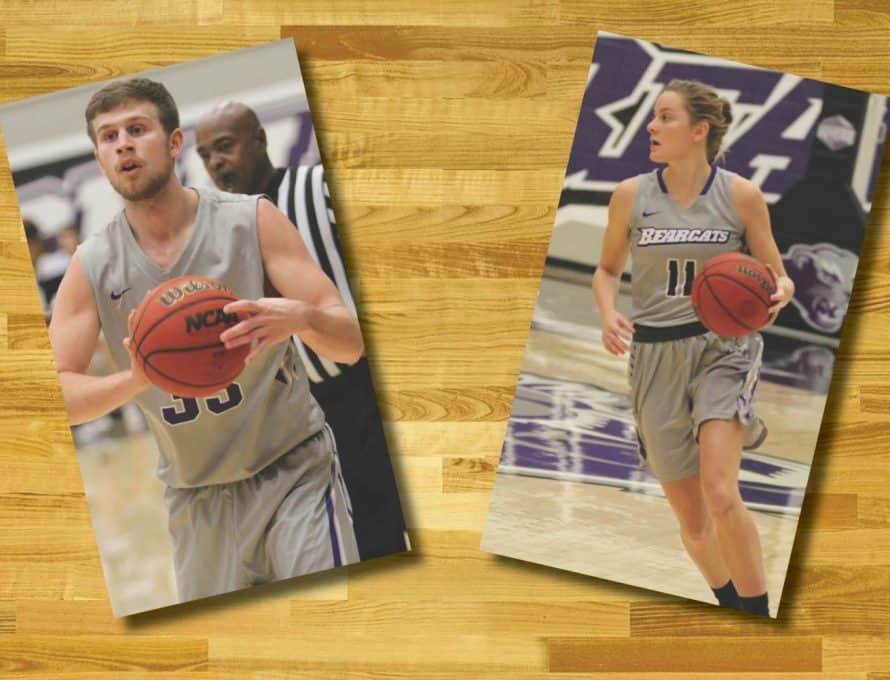 BOLIVAR – The life of a college student-athlete is nothing short of challenging.

And, somewhere in the midst of that schedule, sleeping and eating must be worked in.

But that is the life that both Morgan (Henderson) and Andy Campbell chose early on.

An early love for sports

Morgan grew up with two older brothers who were involved in sports, and an aunt who was a basketball coach. Andy’s dad played college football, and his older brother and sister played multiple sports, “so I spent my childhood traveling around to watch them play,” he said.

Growing up in sports-crazy households, Morgan and Andy each knew they wanted to continue to compete in sports on the college level.

“It’s easy in southwest Missouri as you watch great basketball growing up,” said Morgan, who decided in middle school that she wanted to play in college.

“I’ve wanted to play college sports for as long as I can remember, but I didn’t think I was going to play basketball,” Andy said. “Baseball was my best and favorite sport for most of my life. Basketball was just a sport I played until high school when my coach took a real interest in developing me as both a player and a person.”

The road to SBU

Their basketball paths, and the desire to grow in their faith, led both Morgan and Andy to Southwest Baptist University in Bolivar.

“The coaching staff is great,” Morgan said. “I love the color purple, it’s close to home (Buffalo) and it’s a small school with great professors. I wanted to learn how to grow as a servant of Christ.”

“Coach Clark Sheehy was really good to me during the recruiting process and made me feel right at home at SBU,” Andy said. “I knew this school was a place I could grow spiritually, and that meant a lot to me.”

Trying to balance the responsibilities in the classroom and on the court (or field) is a daily grind for college student-athletes; it takes a lot of discipline and cooperation.

“I like to think I excel at time management, but I still had many late nights, studying on the bus, and early mornings,” Morgan said. “Thankfully, I had great professors and coaches who both understood and supported the opposite field.”

“College athletics is very demanding and so is school,” Andy said. “I’ve spent many sleepless nights bouncing back and forth between study hall and the gym trying to make sure I get my shots up while also being prepared for big tests.

“SBU is a unique place, though, and I’m extremely thankful for my teachers and coaches who encouraged me to excel in both areas of my life.”

Both Morgan and Andy have excelled in the classroom and on the basketball court, while also serving on the mission field.

They each graduated in May 2019 with bachelor of science degrees in biology – one week after getting married! – and will be attending medical school in the fall at the University of Arkansas-Little Rock. Before that, they will be leading a mission trip to the Ukraine this summer. Over Spring Break, they served with a mission team that traveled to Colombia.

“Colombia was great,” Morgan said. “We worked with missionaries to help jump-start their ministries by sharing the good news of Christ in the community. We also spent a lot of time at the elementary schools loving on the kids and teaching them English via Bible stories, and even helped the local church with some painting and maintenance projects.

“We’re going to be helping with an English camp and sharing the Gospel with that platform in the Ukraine. We are so excited.”

With a commitment to excellence in academics and athletics, and hearts to serve, Morgan and Andy were named the 2019 Rex Brown Award recipients.

The Rex Brown Award is the highest award given to SBU’s student-athletes. Each year, the award is presented to one female and one male senior student-athlete, who has exhibited strong Christian character, academic achievement, leadership qualities, and has had a major impact on their sport.

“Andy and Morgan represented the Bearcats well during their careers,” said SBU Athletic Director Mike Pitts. “They were leaders as they played, as they studied, and as they impacted our community. I remember listening to both of them speak at our 6th Man Club Luncheons – they really represent everything we want to see in the lives of our student-athletes.”

The award is named in honor of Dr. Rex Brown, who served as AD at SBU for more than 25 years, leading Bearcat Athletics from the junior college ranks to the NAIA and into NCAA Division II competition. Dr. Brown was the baseball coach from 1970-75 and chair of SBU’s health and physical education department.

“He has been a really good example in his four years of a committed student-athlete,” Sheehy said. “His involvement in spiritual growth on campus and in our community has been so positive for our program and school. We are very happy for him and excited about his future.”

And, women’s basketball coach Kelsey Keizer expressed her admiration for the example Morgan is to everyone around her.

“I feel so blessed to have coached Morgan during her four-year career at SBU,” Keizer said. “Her work ethic was always excellent, but what stood out more to me was the joy she brought to our team. I have never experienced a player who had so much respect and admiration from her teammates.

“Morgan exemplified what we define as true success within SBU Athletics. I have always been impressed with her commitment to sharing the joy of Jesus with anyone she comes across. Her personality is radiant and I know it will continue to shine in her medical career. I am so excited to continue to cheer her and Andy on in their journey through life.”

Morgan and Andy acknowledge that they have not achieved the honors they have received on their own.

“I’m so grateful,” Morgan said. “Being a collegiate athlete was difficult, but the Lord gave me the strength to persevere when I wanted to quit. This award reminds me of His faithfulness in all the little moments and now I look back and realize for four years He carried me. My time at SBU was so sweet and this award is so appreciated.”

“It’s really humbling to say the least,” Andy said. “Morgan and I worked really hard to be the best we could be on the court and in the classroom, while also trying to live in a way that glorifies the Lord. We were so blessed to meet each other and to challenge each other in every aspect of our life, but especially in our walks with the Lord. We’ve had many long talks trying to encourage one another to keep pushing, keep fighting, or keep leaning on the Lord, and now to receive an award for staying the course is a huge honor.”