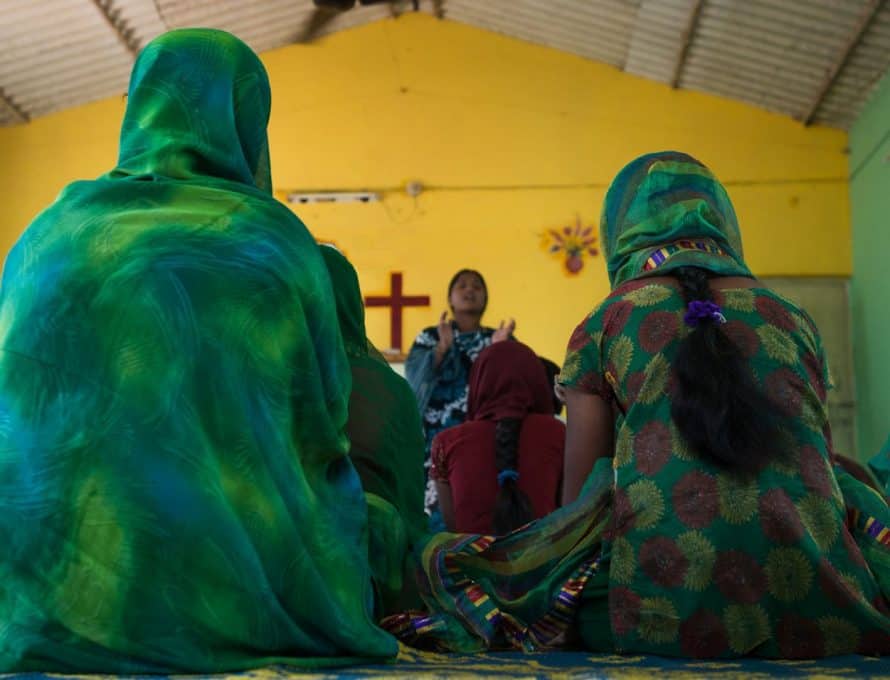 Believers in South Asia gather for their weekly cell group meeting. Since her husband’s death, Shreya (name changed) has taken an active role in ministry in her church and village, supported by Southern Baptist partners. (IMB Photo)

EDITOR’S NOTE: Madeline Arthington, who wrote this article, is a writer who serves with IMB in Central Asia.

SOUTH ASIA—Shreya’s* grief is raw. Only a few months ago, her husband was alive. Now he is dead. They were such good partners.

They ministered together in their church, where he was a pastor, and in the surrounding villages. She was devoted, always accompanying him in ministry, sitting on floors with poorer women, and making food for guests.

But all it took was a day of shoveling rocks for his heart to give out. And now, Shreya — not even 40 years old — is a widow with two teenage sons.

But God has not left Shreya. He has helped her, and He has transformed her.

When her husband was alive, Shreya was hesitant about evangelism. She would slip to the back of the group and push other women ahead to share when they went into the villages.

But her husband’s death lit a desire in Shreya to continue their vision to shine the light of Christ in their area, one of the most spiritually dark areas in the country. Even at his funeral, surrounded by women and deep in grief, Shreya said she wanted to carry on her husband’s work.

Since her husband’s death, Shreya has taken an active role in ministry in her church and village. She shares with the lost and teaches God’s Word in more areas than she did when her husband was alive. She leads a prayer group and works to get new groups started nearby.

Pray that God will use Shreya in a mighty way and draw many people to Himself through her ministry.

Your gifts through the Cooperative Program and the Lottie Moon Christmas Offering® make it possible for Southern Baptists to live and work in South Asia, where they work alongside national believers such as Shreya to share the gospel and disciple new believers. Thank you for giving.