In Aleppo, Syria, and other regions where Christian communities face severe persecution is depicted in the new movie, "Christians in the Mirror." Photo submitted

WASHINGTON (BP) – One is a former FBI intelligence analyst supervisor, the other a longtime missionary.

In their respective ways, they’re intent on raising awareness of Christians facing persecution across the world.

Patrick Carberry, who was with the FBI for 17 years, worked on intelligence matters in the Middle East war zones of Iraq and Afghanistan.

Nik Ripken has served with his wife Ruth as International Mission Board missionaries for 35 years.

And each of the men, through their nonprofit organizations, has produced a film.

Recently in Washington, Carberry premiered “Christians in the Mirror,” focusing on members of persecuted and displaced Christian communities in the Middle East, Asia and Africa. The documentary was screened again the evening before the State Department’s second Ministerial to Advance Religious Freedom opened July 16 in the nation’s capital.

Ripken adapted his autobiographical book, “The Insanity of God – A True Story of Faith Resurrected,” into a dramatic movie released in 2016 recounting his family’s experiences as they ministered in the Middle East and Africa.

Patrick Carberry ‘had to do something’

Observing persecution among Christians in Iraq and Afghanistan is what compelled Carberry to establish Joshuacord, based in Valrico, Fla. The nonprofit’s name refers to the red rope mentioned in Joshua, chapter 2. It was a symbol of support — a lifeline — for the family of Rahab, the ancestor of Jesus who helped the Israelite spies escape from Jericho. 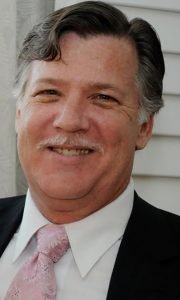 While working in Mideast war zones, Carberry said he saw “the travesty that’s been happening to so many minority religions, including Christians” who have been persecuted by ISIS and other anti-Christian factions.

“So when I got back I asked, ‘What are we doing as a community — the big ‘C’ church — in helping these Christians?'” He said he found little being done “to raise awareness of what was going on out there,” which he said was often “basically genocide.” In this “an epiphany of sorts … I believed I had to do something” as “a wakeup call to the churches.”

Joshuacord encourages prayer for the persecuted, as well as support through donations, volunteerism and participation in the annual Joshua 1:9 Freedom 5K Run, an event established in 2013, which collects entry fees.

Carberry forwards donations and other financial support to four organizations in Joshuacord’s countries of primary focus: Afghanistan, Egypt, Iraq, Nigeria, Somalia and Syria. He said he has carefully vetted these partners: Good Shepherd Academy in South Sudan; the American Foundation for Relief and Reconciliation in the Middle East; Syriac Orthodox Church for the Little Angels Orphanage; and Coptic Orphans.

Christians in the Mirror tells the first-person stories of Christians in war-ravaged cities of Aleppo, Syria, and northern Iraq and in rural villages of India, South Sudan and Egypt. The title challenges Christians to look in their “Christian mirror” to see who is reflected back.

Allott said in a phone interview that since the documentary’s Washington premiere, “we’ve gotten a lot of interest in the film for screening it in different venues. … I think that a lot of people realize there is this crisis of Christian persecution globally that is at a point that people are starting to take notice.”

The goal, Allott said, is for every church in the nation to screen the film, as well as getting the film and free study guides to Christian student groups at universities and Christian high schools of all denominations so students “can have their own mini-screenings and start to get educated. This might be the only film or documentary they ever see about this issue or about Syria for example, or Egypt or Sudan.’

“And so, for the rest of their life, when they hear about this part of the world, they’re going to hopefully think back to the film and it’s going to guide their view of these issues in a really, really important way. So, for 10, 20 years, I hope that the film is still bearing fruit in that way.”

To view the trailer and to get more information about scheduling a screening, visit ChristiansInTheMirror.com/screenings.

Ripken, in a phone interview from his home in Kentucky, said he experienced persecution firsthand during a 35-year missions career. “I’ve been shot at; I’ve been held for half a day at a time, just people trying to shake me down for money. And there’s been a lot of dangerous situations.” Also, in 1997 their son Timothy died in a Nairobi, Kenya, hospital of cardiac arrest from an asthma attack. 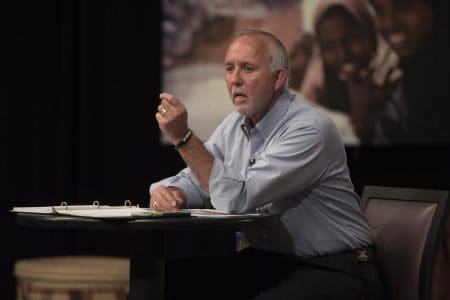 Longtime missionary Nik Ripken is focused on stirring Christians to learn from the persecuted church. Those who fail to share their faith, he says, can be like persecutors of those who are perishing without the Gospel. Photo submitted

The couple plans to retire from IMB service in March 2020 but will continue their work through Nik Ripken Ministries, which produces and distributes materials “to challenge believers to boldly follow Jesus, sharing their faith with others — no matter the cost,” the nikripken.com website states, noting the ministry’s mission: “to expand the Kingdom of God by sharing truths and practices learned from believers in persecution.”

“We’re booked through 2020,” Ripken said. “We’re speaking at least two to three times a month.” And “for the first time,” Ripken said he’s “actively trying to raise support so we can continue doing what we’ve been doing for a long, long time. I’m 66 and we’ll do this as long as we’re healthy, but there’s such a hunger for this message,” which the website explains:

“From the world’s point of view, the cross of Jesus will always be a stumbling block…. Today, as throughout all of history, a God who ‘so loves the world that he gave his only begotten Son’” is seen as having committed “an act of insanity.” And “For those of us who know Jesus, we want to model such insanity,” which, Ripken said in the interview, “believers in persecution have modeled for us.”

But, he continued, “the hardest thing we ever say to churches, civic organizations or whoever is that when I keep my faith to myself — I don’t share with my family, my friends, my boss, whoever — not only do I fail to identify with my brothers and sisters in chains, I am absolutely identifying with their persecutors, the ones that chained them.