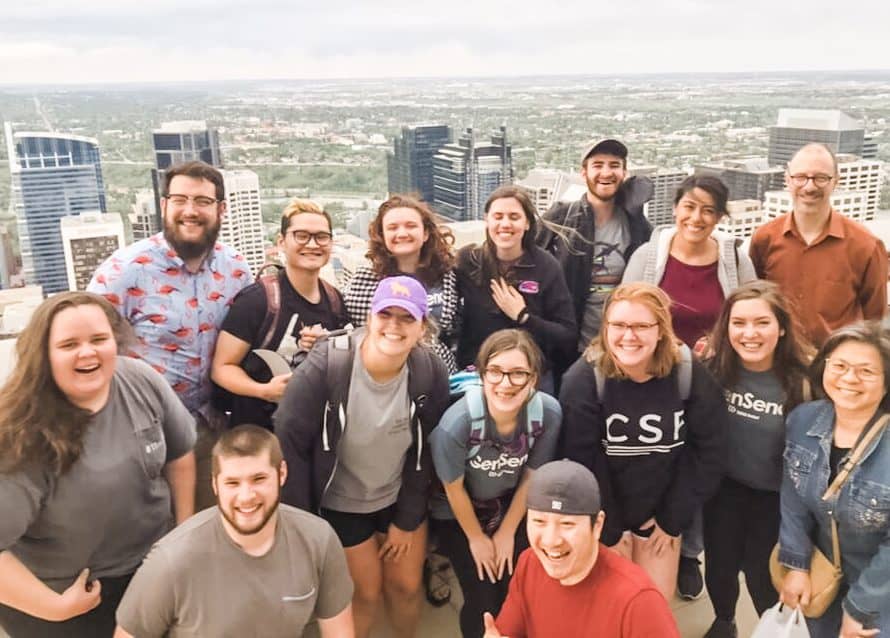 In Calgary, students serving with Send Relief's GenSend summer missions program lived in summer housing at a local university. While staying there, they were able to lead a college student to the Lord. GenSend sent nearly 280 students to 19 different locations across North America. NAMB photo

ALPHARETTA, Ga. (BP) – A group of students in Calgary had the opportunity to share their faith with another student and saw him come to Christ. The next week, another team of students, 3,400 miles away in Puerto Rico, led a grandmother to Christ. In New York City, an unexpected subway detour led a student to a gospel conversation with a Muslim man.

All summer long, students participating in Send Relief’s GenSend program have been living “on mission” in 19 cities across North America by serving with North American Mission Board (NAMB) missionaries.

“We teach students how to live their lives on mission in a different context by putting them alongside church planting and compassion ministry missionaries,” said Steve Turner, senior director of next generation mobilization with NAMB’s Send Relief ministry.

“We teach a set of principles that are transferable,” he noted, “no matter where they go.”

The GenSend team in Calgary stayed in summer lodging at a local university and had the opportunity to interact with other college students living there, including the one who gave his life to Christ.

“He spoke to us about everything that he was struggling with and told us that he needed Jesus,” reported Carly Hale, a member of Cross Church in Fayetteville, Ark., on behalf of her team. “We were able to pray with him and lead him to the Lord.”

In Puerto Rico, part of their GenSend team worked with a local church plant’s Vacation Bible School (VBS). As parents and guardians dropped of their children, the college students were able to share the Gospel with the adults. There, a grandmother who had grown up in and around the church heard the Gospel for the first time.

“After a lengthy chat, she confessed her need for Christ,” said Itamar Elizalde of the Puerto Rico GenSend team.

“Later, the grandmother admitted that she went [to the VBS] so her grandchildren could be entertained,” Elizalde said, “but [she] understood that the Lord had a deeper purpose.”

As GenSend students live in their cities over the summer, their intentional focus to share the Gospel with their neighbors leads them to cross generational, ethnic and religious boundaries.

Several teams reported encounters with members of other faiths — including Baha’i, Mormonism and Hinduism — where they had to engage in respectful dialogue to defend and share their faith.

When a recent blackout in New York City led GenSend student Bruno Telma to take a different subway train, he wound up sharing the Gospel with a man who was asking for money.

“I asked him if I could pray for him,” Telma said. “Then I started telling him about Jesus, and he told me he was a Muslim, but he really wanted [to respond]. So, he accepted Christ right there.”

Katherine Hafley of Bush Memorial Baptist Church in Troy, Ala., and a student at Troy University described her anxiety ahead of going door to door to invite people to a sports camp hosted by a Washington, D.C., church plant. She realized she needed the Holy Spirit’s help to have the courage and overcome a fear of rejection.

“Between the group of four people, we had about five gospel conversations and one profession of faith. And that’s just the fruit we saw that day,” Hafley said. Several kids from the neighborhood signed up for the sports camp and one person started attending the church regularly.

“The work … reminds me that we have no idea what God can do through our faithful action,” said Joel Whitson, a student at Spurgeon College at Midwestern Baptist Theological Seminary who has been serving in Chicago this summer.

“We simply need to listen, act and watch as God grows the kingdom one soul at a time,” he noted.

During their summer in the city, the students are encouraged to learn the city’s routines by visiting coffee shops, hosting activities at public parks and finding the hubs where residents are building community.

Turner calls this “exegeting the culture.”

Part of reading their community led GenSend participants to take note of the needs affecting their cities. GenSend introduces students to Send Relief’s compassion ministry efforts — and to how these efforts help in making gospel conversations easier as students and churches seek to meet needs with the goal of seeing lives changed through the power of the Gospel.

For example, GenSend students continued to help citizens in Puerto Rico rebuild after the devastating hurricane in 2017.

Across North America, GenSend encouraged students to meet needs through Send Relief ministry centers and through their local church plants.

For ways the church can get more involved in meeting needs in the community, visit sendrelief.org for ministry guides and other helpful resources.