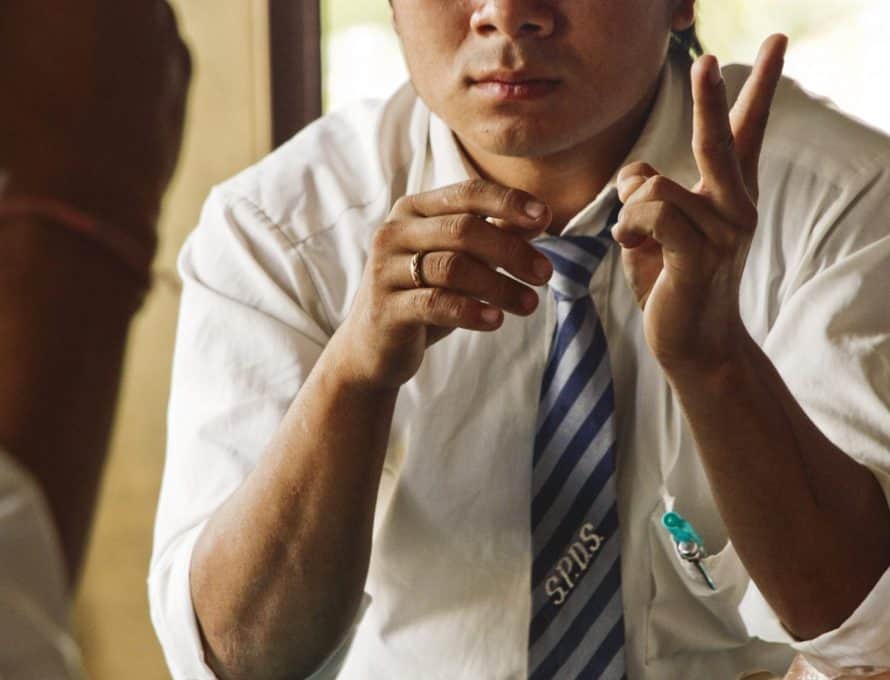 A student converses in sign language at a school for the Deaf in Thailand. Through Southern Baptist support, IMB missionaries live in Thailand where they share God’s Word with the Deaf — resulting in their eternally transformed lives. (IMB Photo)

EDITOR’S NOTE: Nicole Leigh, who wrote this article, is a writer for IMB. She lives with her family in Prague.

THAILAND—Aroon* was once a ladyboy. In Thai culture, little boys age 2 or 3 who show any inkling towards femininity are labeled a “ladyboy” and raised to believe that even though their outside gender is male, their spirit is female.

Ladyboys are never given a choice to be who they want to be. They often struggle to find jobs, and they are treated as less than other men and women. Aroon is also Deaf, which further separates him from the mainstream culture.

IMB missionaries in Thailand are planting churches in the Deaf community by sharing God’s Word in sign language. Aroon met one of these missionaries and was able to see and understand the gospel for the first time.

When Aroon learned that he was created in God’s image and could have the Holy Spirit, he wanted to know more. Over many months, the missionary welcomed Aroon into his home, taught him Bible stories, and treated him with respect.

Aroon accepted Christ and is working to be the man God made him to be, but he still struggles with the Buddhist ladyboy identity he grew up with. This label from his previous life affects the way he is viewed by his family, his peers, and himself.

Pray for Aroon as he grows in his understanding of who he is and who God is. Pray for him as he seeks to serve God as a leader in the local Deaf church.

Your gifts through the Cooperative Program and the Lottie Moon Christmas Offering® support Southern Baptists who live in Thailand to share God’s Word with the Deaf in a way they can understand — resulting in their eternally transformed lives. Thank you for giving.

Learn more about ministry among the Deaf.