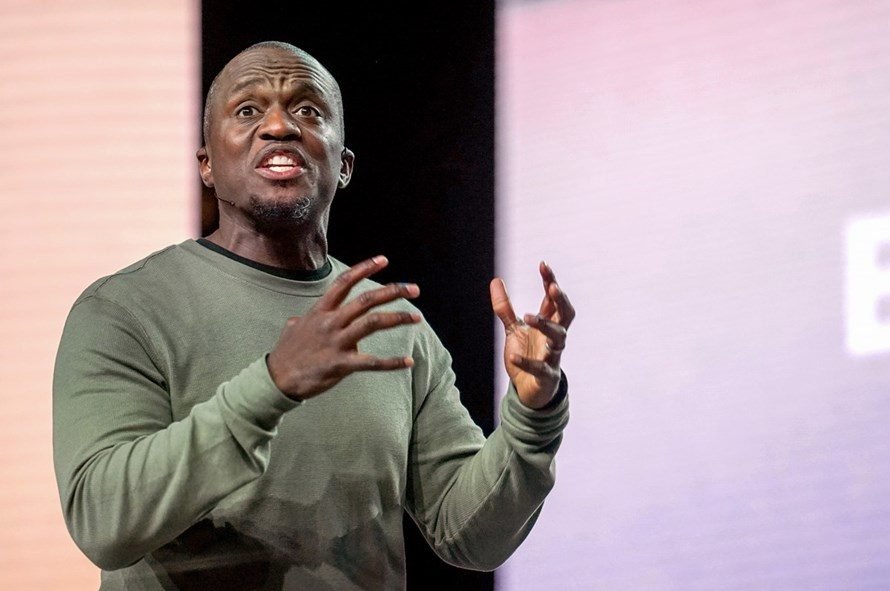 BIRMINGHAM – Dhati Lewis, lead pastor of Blue Print Church in Atlanta, shares the message of Matthew 5:9 -- "Blessed are the peacemakers" -- June 10 on the last day of the two-day 2019 SBC Pastors' Conference at the Birmingham-Jefferson Convention Complex here. (BP photo by Lindy Lynch.)

BIRMINGHAM (BP) – “Kingdom Character” was the theme of Monday afternoon’s and evening’s 2019 Southern Baptist Convention Pastors’ Conference (June 10). The focus, from Matthew 5, was on the last three Beatitudes and being salt and light.

Quoting from the iconic college football movie, “Rudy,” Ben Mandrell, pastor of Denver’s Storyline Fellowship, helped pastors focus on seeing God as part of their study of the Beatitudes during the 2019 Pastors’ Conference.

“This is the most beautiful sight these eyes have ever seen,” quoted Mandrell, referring to the moment Rudy’s father beholds the Notre Dame stadium for the first time. Mandrell added, “One of the greatest gifts that God has given to us is the ability to see.”

His message from Matthew 5:8, titled “Blessed are the pure in heart,” challenged pastors to refocus their eyes on what it takes to truly see God. “If you get your heart right, you get a ‘Rudy,’ God-moment,” he said. “The people who get to see God are the people who desire above all other things and who have purity in their hearts.”

Addressing issues of power-seeking, adultery, and sharing negativity about the church in the pastor’s home, Mandrell said it was impossible to bring a message about how the pure in heart will be blessed by seeing God without confronting pastors with these difficult issues.

“We all think that we are immune from this. And, because we actually believe this, we don’t keep our guard up,” Mandrell said.

Being a peacemaker is not “elective,” but is a call from Christ to every believer, Dhati Lewis, lead pastor of Blueprint Church in Atlanta, Ga., and vice president of Send Network for the North American Mission Board, said.

He spoke on Matthew 5:9 and Christ’s Beatitude, “Blessed are the peacemakers.”

Lewis defined being a peacemaker as “bringing reconciliation where God has called us.”

For him, that means leading a multiethnic church in the heart of Atlanta’s Old Fourth Ward – an area that is home to an ongoing gentrification initiative and the city’s largest Section 8 housing area.

As a leader of a diverse church and a husband in a diverse family (his wife is Caucasian), he encourages believers to “run to the tension” and to be known for their vision, instead of their “anti-vision” defined as being known “more for what you’re against than what you’re for.”

Additionally, instead of seeking justice, the believer must seek reconciliation, because, “Justice without reconciliation is what the Bible calls hell,” he said.

Matthew 7:12-14 encourages Christians to “rep” (represent) Christ as peacemakers by calling them to reflect personally, emphasize corporately, and pursue the narrow road of reconciliation, Lewis shared.

This can only be done if an individual lays aside prejudices that come from being “more dependent on culture than on Christ.”

“My prayer for us in the SBC is that we can give what we can; start to have (peace) and that one day we would be able to really embrace the beauty and the complexity (of diversity),” he said.

His vision for members of the SBC is that churches would “really be able to plant churches everywhere for everyone. And that we can demonstrate the complexity of what it means to be SBC, what it means to embrace our identity in Christ as peacemakers.”

In order to achieve that, though, “We recognize that even though we fall short, we have the ultimate Prince of Peace” and believers must be “willing to pay the price for the type of peace that God wants for this country, for our denomination, for the body of Christ.”

Pastor Andrew Brunson, who was recently released after being imprisoned in Turkey for two years, spoke at the Monday evening session of the SBC Pastors’ Conference on the topic of persecution.

“Your prayers sustained both me and my wife,” Brunson said. “The Lord just made me a magnet for prayer, and I think someday you’re going to see that it was really something tremendous that God was doing.”

“I don’t think that we’re prepared for what is coming,” Brunson said. “Especially the next generation, I fear that many of us are complacent and we’re unaware and this means that the people in our churches are going to be blindsided by what comes. You are the ones as pastors and leaders of churches who have the task of preparing the next generation.”

Brunson reiterated that persecution is nothing new for believers and the question for believers is what perspective that they will have about their suffering.

“Many of you are going to have the opportunity to stand in that line of suffering and you have to prepare yourself for that,” Brunson said.

Brunson concluded his message by recapping his personal experience of persecution in Turkey. He explained that his time in prison “tested my love for God,” but that he resolved never to compromise his relationship with God.

In a world rife with sexual abuse scandals, racial conflicts, moral failures and social media quarrels, Scroggins encouraged believers to take responsibility for these issues to strengthen the church’s witness.

“There are things happening in our families, in our churches, in our communities, in our world that are not our fault, but God has made them our responsibility,” Scroggins said. “When Jesus preaches the Sermon on the Mount, He is telling His disciples – and, by extension, He’s telling us – that the broken kingdoms of this world are not all our fault; but showing this world what the Kingdom of heaven looks like is our responsibility.”

Expositing Jesus’ instructions to His disciples to be salt and light, Scroggins shared two specific points. First, “we have to be gritty enough to make a difference.”

Second, Scroggins said, “we have to be winsome enough to win some.” Noting that a city on a hill draws people in, Scoggins explained that churches must be welcoming, hospitable and places of safety and refuge.