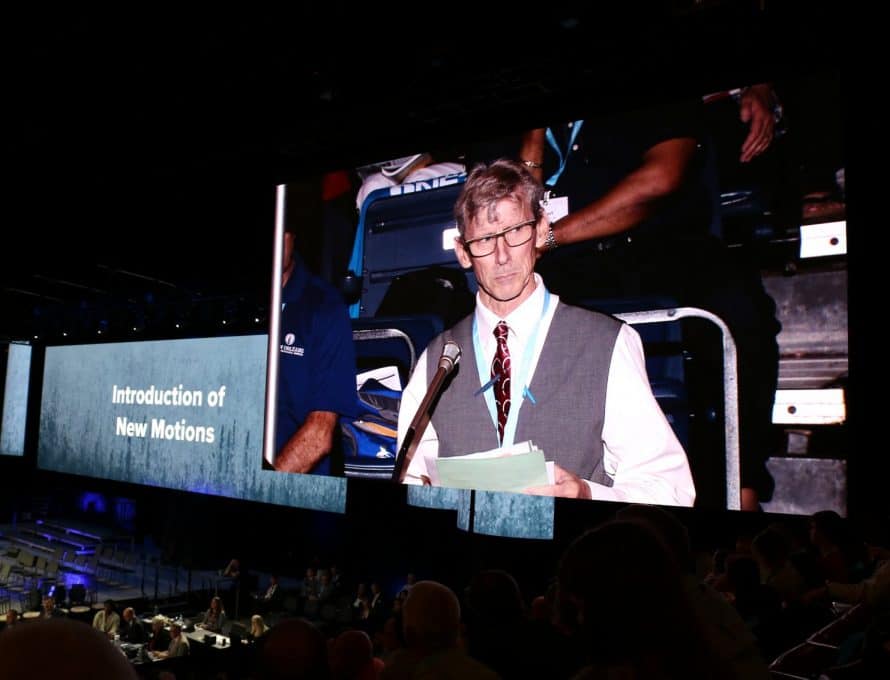 BIRMINGHAM – Matt Dunn of First Baptist Church in Bates City, Mo., makes a motion that the convention convene a study committee to update the Baptist Faith and Message 2000 to include a 19th statement declaring “God will restore National Israel like Romans 11 says and bring about a reunion with her neighbors in the Middle East.” Pathway photo.

BIRMINGHAM (BP) – Eighteen of the 23 motions by messengers at the Southern Baptist Convention annual meeting here – including one motion by a Missourian – were referred to SBC committees or entities; five were ruled out of order.

The Committee on Order of Business made the recommendations to messengers during the SBC’s June 11-12 meeting.

Referred to all entities:

• A motion by Matt Dunn of First Baptist Church in Bates City, Mo., that the convention convene a study committee to update the Baptist Faith and Message 2000 to include a 19th statement declaring “God will restore National Israel like Romans 11 says and bring about a reunion with her neighbors in the Middle East.”

• A motion by Phillip Bethancourt of Redemption City Church in Franklin, Tenn., to request that each SBC entity provide an update related to their efforts to address abuse, covering what the respective entity is doing to foster effective abuse awareness, prevention and care, what steps have been taken since 2018, and how their entity is partnering with the efforts of the Sexual Abuse Advisory Group.

Referred to the Executive Committee:

• A motion by Brad Cone of Lamp City Church in Decatur, Ga., that the Executive Committee consider modernizing the nomination process and technology for the SBC’s boards and committees.

• A motion by Leroy Fountain of Franklin Avenue Baptist Church in New Orleans that a comprehensive report be given at the 2020 annual meeting on the progress of 12 recommendations adopted by the SBC in 2011 for expanding ethnic participation in the convention.

• A motion by Morris Chapman of Triune Baptist Church in Arrington, Tenn., to request that the Executive Committee amend the SBC’s Business and Financial Plan where necessary to strengthen the fiscal accountability of the SBC’s entities to the convention.

• A motion by Dennis Golden of Grace Baptist Church in Braden, Tenn., to amend the SBC constitution and bylaws to allow all Southern Baptist senior pastors to cast their votes electronically for SBC officers.

• A motion by Pam Richardson of New Life Baptist Church in Baker, La., to amend the BF&M 2000 Article 6 to state, “While both men and women are gifted for service in the church, the office and function of the pastor is limited to men as qualified by scripture.”

• A motion by Ryan Broers of Cave City Baptist Church in Cave City, Ky., that the Executive Committee create an official statement regarding the social gospel – what it is and what role it should have in the ministries of the SBC and of Southern Baptist churches.

• A motion by Brent Epling of First Baptist Church in Charlotte, N.C., that the Executive Committee consider a day of special emphasis and prayer for the global persecuted church to be added to the SBC calendar of activities.

• A motion by Aaron Colyer of First Baptist Church in Roswell, N.M., that the Executive Committee consider the viability for developing an avenue for churches to request funding for the investigation of sexual abuse.

• A motion by Robert Anderson of Colonial Baptist Church in Randallstown, Md., to add a George Liele Evangelism, Church Planting, and Missions Day to the SBC calendar of activities on the first Sunday in February.

Referred to the Committee on Order of Business:

• A motion by Sarah Gregory of First Southern Baptist Church in Mountain Home, Idaho, to set aside a time at the 2020 annual meeting to honor the Baptist Faith and Message 2000, the Conservative Resurgence and its leaders.

• A motion by David Haynes of First Baptist Church, Center Point, in Birmingham, requesting that the Ethics & Religious Liberty Commission study the effects of birth control pills, IUDs and other contraceptive devices to see if they have any effect on a conceived child and report their findings in 2020.

• A motion by Rebecca Krueger of Concord Church in Calera, Ala., asking the Executive Committee and ERLC to implement a process to provide trauma counseling for survivors of abuse.

• A motion by Dau Ayub of First Baptist Church in Houston for the convention to increase its efforts to equip the local church to minister to groups promoting sexual immorality of various types and to be prepared for “attacks on the pulpit.”

Referred to the North American Mission Board:

• A motion by David Hobson of Dogwood Grove Baptist Church in Adger, Ala., to study the feasibility of initiating a program through the North American Mission Board to partner with associations comprised of smaller churches and bivocational pastors to place a second staff member as an associate pastor at no cost to the church or association until they can partially fund it.

• A motion by Laura Smith of South Side Baptist Church in South Bend, Ind., to ask LifeWay Christian Resources to look into including a Gospel presentation in each lesson for children through the sixth grade.

• A motion by Benjamin Cole of Emmanuel Baptist Church in Enid, Okla., that the convention request the trustees of Southwestern Baptist Theological Seminary to authorize the seminary president and legal counsel to pursue the lawful recovery of school property that may have been removed from the president’s home.

The following motions were ruled out of order by the Committee on Order of Business, citing legal or polity constraints that prohibited their consideration:

• A motion by Wade Burleson of Emmanuel Baptist Church in Enid, Okla., to amend the report of the International Mission Board to include the full text of the May 29, 2019, Sexual Abuse Examination update.

• A motion by Adam Blosser of Goshen Baptist Church in Spotsylvania, Va., to amend SBC Bylaw 18 adding, “The Recording Secretary shall be a non-voting member of the Executive Committee.”

• The following motion was ruled out of order because it was in the nature of a resolution, and the time to submit resolutions had expired prior to the convention:

• A motion by Morgan Bush of Morningside Baptist Church in Huntsville, Ala., that each church be urged to consider the impact of pornography and take “vigorous action to meet and defeat the effect of pornography.”

The following motions were ruled out of order because they requested that the convention exercise authority over an entity’s board:

• A motion by Derin Stidd of Harmony Baptist Church in Frankfort, Ind., that the ERLC do a study on how churches, associations and state conventions can work with entities within their state to promote the immediate abolition of human abortion.

• A motion by Caleb Lewis of Gentilly Baptist Church in New Orleans to request that the Council of Seminary Presidents make the most recent BF&M the only doctrinal statement faculty is required to sign.