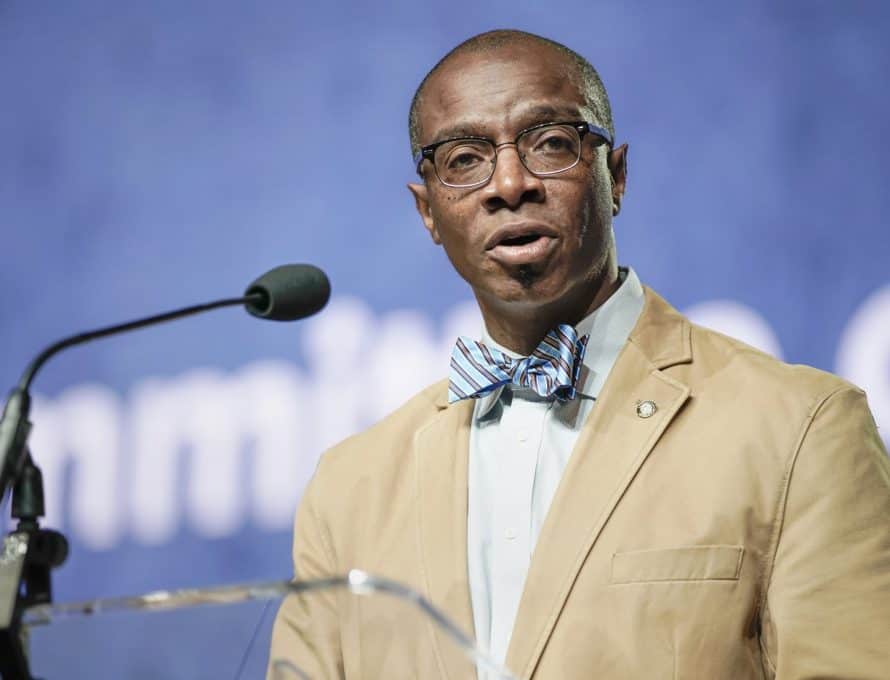 BIRMINGHAM – Curtis Woods, chairman of the Southern Baptist Convention Resolutions Committee, gives the committee’s report June 12 at the 2019 Southern Baptist Convention Annual Meeting here. The Resolutions Committee was committed to making sure every resolution was critiqued with the desire to keep the Gospel of Jesus Christ above all, he said. BP photo by Marc Ira Hooks

EDITOR’S NOTE: This article includes additional reporting from Pathway associate editor Benjamin Hawkins, in the section about the resolution on critical race theory and intersectionality.

BIRMINGHAM (BP) – Messengers to the 2019 Southern Baptist Convention advocated for the vulnerable against abortion, sexual abuse and religious persecution in approving 13 resolutions,  June 12.

The resolutions also addressed a variety of other noteworthy issues in the convention and the world, including local church autonomy, same-sex attraction, justice, women in the military draft and gene editing.

On abortion, the messengers applauded the recent enactment of state laws to restrict or prohibit abortion and called for the U.S. Supreme Court to reverse the 1973 Roe v. Wade decision that legalized the lethal procedure.

In a meeting that made the sexual abuse crisis in the SBC a priority, messengers passed a resolution that condemned and lamented all such abuse and called on churches and institutions to establish a safe culture for survivors and to guard against and confront abuse.

Messengers also approved a measure in which they pledged to pray for the end of persecution in China and North Korea and called on the United States and the international community to make religious freedom a “top priority.”

Curtis Woods, chairman of the 10-member Resolutions Committee, told reporters the “overarching theme” of the panel’s report “would have been protection – protection of the unborn as well as protection of those who could find themselves vulnerable to sexual abuse, as well as just keeping the Gospel of Jesus Christ first, advancing the Gospel, being concerned about the Great Commission.”

The Great Commission of Jesus Christ is vertical, horizontal and cosmological, he said in a news conference. “God will make all things new in Christ Jesus. And all things will be summed up in Christ. The Gospel pushes us to protect and to love our neighbors well.”

Woods is co-interim executive director of the Kentucky Baptist Convention and a member of Watson Memorial Baptist Church in Louisville, Ky.

All the resolutions except one passed in unanimous or near-unanimous votes. A resolution on critical race theory and intersectionality still gained passage with a clear majority.

The Merriam-Webster Dictionary defines “intersectionality” as “the complex, cumulative way in which the effects of multiple forms of discrimination (such as racism, sexism, and classism) combine, overlap, or intersect especially in the experiences of marginalized individuals or groups.”

These definitions may be disputed amid ongoing scholarly debates about the nature of critical race theory and intersectionality, and the SBC resolution did not use these definitions.

Instead, the SBC’s resolution described critical race theory as a set of tools to explain how race functions in society and intersectionality as the study of how various characteristics overlap.

The resolution also affirmed the Bible as “the first, last, and sufficient authority” regarding how the church tries to amend social evils and said critical race theory and intersectionality should only be used in submission to Scripture.

Tom Ascol, senior pastor of Grace Baptist Church in Cape Coral, Fla., sought to amend the resolution, including with language to say critical race theory and intersectionality are “rooted in ideologies that are incompatible with Christianity.”

Woods told the messengers in response, “What we are saying is that this can be utilized simply as an analytical tool, not a transcendent worldview above the authority of Scripture, and we stand by the strength of this resolution.”

The Southern Baptist pastor who submitted the original draft of this resolution told The Pathway that the SBC’s Committee on Resolutions thoroughly revised the resolution before presenting it to messengers.

“It’s a very different resolution,” Stephen Feinstein, pastor of Sovereign Way Christian Church in Hesperia, Calif., told The Pathway. “… It would have been more accurate for the Resolutions Committee to decline my resolution and make their own. I’m not angry at the final product. … I don’t think they were intentionally doing anything wrong, but it didn’t look right or smell right to present that final resolution with my name on it.”

His original draft denounced “critical race theory and intersectionality” as “founded upon unbiblical presuppositions descended from Marxist theories and categories, and therefore” as “inherently opposed to the Scriptures as the true center of Christian union.” It also calls upon Southern Baptists to “make progress in rooting out the intentional promulgation of critical race theory and intersectionality in both our churches and institutions.”

By contrast, the resolution presented to SBC messengers denounced only the “misuse” of critical race theory and intersectionality, describing them as “analytical tools” that can appropriately be used, as long as they are placed under the authority of Scripture and not used in any way that would contradict Scripture.

“I do prefer the original resolution as I wrote it, but I also understand what the Resolutions Committee did,” Feinstein said. He explained that his original resolution denounced critical race theory and intersectionality as a broad worldview, paying less attention to any practical analysis that might arise from them. He said the committee changed his resolution because “they believed that there are some elements from critical race theory and intersectionality that due to ‘common grace’ accurately describe certain people’s experiences in certain social situations.

“And that is true.” Feinstein added. “And that is why they changed it, because if they would have accepted it as I put it, they would have condemned” any true conclusions that arise from these theories. “I think they were just trying to be precise.”

Feinstein noted that he has corresponded with Woods about the changes to the resolution. “He made it clear to me that he is not a promoter of the critical race theory as a worldview” and that Southern Baptists can use the resolution to refute the Marxist underpinnings of critical race theory and intersectionality and various unbiblical conclusions that arise from these worldviews.

Woods confirmed Feinstein’s claims about their correspondence, telling The Pathway that the committee “spent several hours discussing the original resolution with the goal of honoring (Feinstein’s) desire.”

“The committee considered declining the resolution (instead of revising it),” Woods explained, “but we appreciated the heart of Pastor Feinstein to protect the gospel from unbiblical assumptions and conclusions that are often associated with CRT/I (critical race theory/intersectionality) as a worldview. We share that heart.

“In our revisions, we affirm sufficiency of Scripture for addressing social ills and the gospel for creating true and lasting transformation in people’s lives. We distinguished between a more narrow view of analysis and a more expansive worldview, so that we can condemn absolutizing CRT/I as a worldview and yet not condemn all possible insights that may be gleaned.”

Woods told The Pathway that the Resolutions Committee held three priorities: 1.) to “keep the gospel above all in crafting resolutions”; 2.) to “craft resolutions that ‘a strong majority’ of messengers would affirm when we gathered”; and 3.) to “create resolutions that can hold others accountable if they contradict the glorious gospel of the one true and living God.”

He said that no SBC officers or SBC entity leaders were involved in discussions about the revision of Feinstein’s resolution, although the “committee had a wealth of academic servants lending their voices to the edits.” He added, “Roger S. Oldham, Vice President of Convention Communications and Relations of the Executive Committee, whose office serves as a designated liaison, was present in our deliberations.”

Nevertheless, in a June 15th post on Facebook, Mark Coppenger, professor of Christian philosophy and ethics at the Southern Baptist Theological Seminary, expressed concern about how the resolution may be used. Coppenger, former president of Midwestern Baptist Theological Seminary, previously served for six years with the Resolutions Committee, including as chairman and as a staff representative for the Executive Committee.

The resolution, Coppenger wrote, could actually “provide some cover and leverage” for unnamed “folk” in the SBC who are “pretty keen” on critical race theory and intersectionality, but who have “been catching heat (well-deserved in my opinion)” because of their views.

“A good many messengers had little or no idea of what was going on but they didn’t want to be difficult,” Coppenger wrote. “So they went along. It was kind of like being asked to vote on whether Existentialism or the writings of Karl Barth might prove useful.

“In short,” he added, “I think this resolution was, at the least, gratuitous.”

Messengers also approved resolutions in which they:

• Reaffirmed the doctrine of local church autonomy under Christ’s lordship and rejected its use as a way to conceal the sins of pastors and others in the church who are guilty of abuse.

• Urged Christians who battle same-sex attraction “to forsake any self-conception or personal identity that is contrary to God’s good and holy purposes in creation and redemption” and commended the “faithful witness” of such disciples who walk in obedience to Jesus.

• Promised to oppose “a divisive spirit” and to develop a “cooperative culture” for the fulfillment of the Great Commission.

• Committed to respond to injustices by Gospel proclamation, advocacy for oppressed people, acting with justice personally and demanding that “spheres of society” function righteously, truthfully and lovingly.

• Renewed their commitment to the Great Commission and encouraged the convention’s seminaries, entities and churches to enable pastors to understand “how culture and contexts shape ministry methods and strategies.”

• Called for the president and Congress to refuse to extend the military draft to include women.

• Denounced human germline editing and called on Congress and international policy makers to make it unfundable and illegal.

• Confirmed their commitment to Christ over a political party and acknowledged the various political affiliations and viewpoints in the convention’s churches.

• Expressed gratitude to God, as well as Southern Baptists in the Birmingham area and all others who helped with this year’s meeting.

The committee chose not to act on proposals submitted on the moral character of government officials, reconciliation with Jewish people because of a lack of concern by the SBC during the Holocaust period, peace between the United States and Iran, and the freedom of conscience of whistleblowers in the SBC.