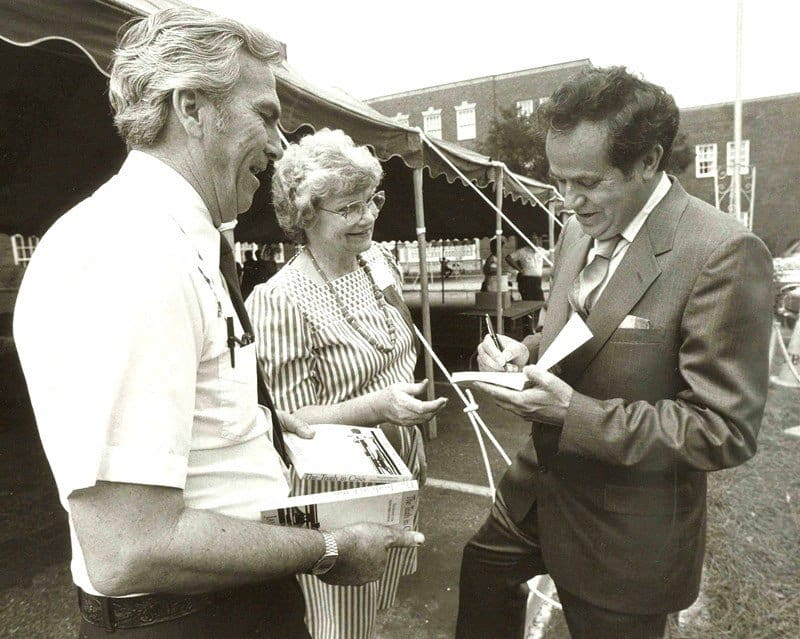 EDITOR’S NOTE: Joni B. Hannigan is a veteran SBC writer who is the owner of the Hefley archives on loan to SWBTS. She is a 1992 graduate of Hannibal-LaGrange University and served as a member of its board of trustees from 2005-2015. This is the thirteenth article in a year-long series, commemorating the history of the Conservative Resurgence of the Southern Baptist Convention (SBC) in honor of its 40th anniversary. To read previous articles, visit www.mbcpathway.com/ConservativeResurgence.

HANNIBAL – Nearly 15 years have passed since James C. Hefley Jr., an Ozark legend and key chronicler of “The Conservative Resurgence in the Southern Baptist Convention,” died, but his contribution to the “battle for the Bible,” lives on.

Hefley, the former writer-in-residence at Hannibal LaGrange University and founder of Hannibal Books and the Mark Twain Writer’s Conference, was a foremost Christian biographer described by those closest to him as “brilliant” and “insightful.”

Between 1986-1990 Hefley published a book each year at the height of the conservative movement, culminating in the five-volume series, The Truth in Crisis. Detailing the course change of the Southern Baptist Convention, in 1991 he published The Conservative Resurgence in the Southern Baptist Convention. The books were at one time among the most sought-after resources in the denomination.

Larry Lewis, Director of Missions for the Mid-Missouri Baptist Association and then president of Hannibal-LaGrange University, wrote the forward for Hefley’s second volume.

“It is not essential that Southern Baptists agree on every jot and tittle or follow any person’s or group’s positions,” wrote Lewis, who later became president of the Southern Baptist Home Mission Board (now the North American Mission Board). “It is vitally important that we know and understand the various movements within our convention and the concerns expressed.

“For this reason I salute Jim Hefley and this new book,” Lewis wrote, “but also Baptist Press and our denominational editors who keep us informed about what is happening.”

Lewis supported Hefley’s efforts in truth telling, even if it meant sometimes being unpopular.

“A free press goes hand in hand with soul freedom and the priesthood of the believer,” Lewis wrote. “We who are heads of denominational institutions may not always appreciate the media … but we need press scrutiny from all sides. We are responsible to the people in the churches who pay our salaries (and who) elect the trustees. …

“A free press keeps us on our toes and aware of that responsibility,” wrote Lewis in commending Hefley’s Volume 2 of The Truth in Crisis. “You may or may not agree with all of his observations and conclusions. You certainly will not agree with everything that is quoted, for he quotes good people on both sides of issues. You will be stimulated to think more deeply, and I hope with greater sensitivity about the concerns of God’s people and the movement of God within our convention.”

Lewis said in an interview at the time of Hefley’s death that he doubts the resurgence would have prevailed without Hefley’s “brilliant” contribution.

“Jim Hefley’s influence through The Truth in Crisis series was as significant as any other one thing in causing the Conservative Resurgence,” Lewis speculated. “The fact that it continued and prevailed depended on a whole lot of things, but I think the [books] were probably just as important as the leadership of Bill Powell, Paul Pressler or Paige Patterson.”

Lewis said Hefley’s “most insightful” work, The Truth in Crisis series, contains “the whole history of liberalism and neo-orthodoxy and how this has impacted not only the SBC, but a lot of denominations.”

In addition to his contribution to Southern Baptist life, Hefley was known as a master storyteller whose tales of presidents and preachers, astronauts, athletes and activists have found their way to the shelves of readers and scholars around the world and in many languages.

After 40 years of free-lance writing, involving travel to over 50 countries to write over 70 books and hundreds of magazine and newspaper articles, Hefley and his wife, Marti, settled in Hannibal in 1985.

Lewis said he recalled meeting Hefley at a contentious SBC annual meeting in the 1970s after trying to submit a pro-life resolution to the assembly and being ruled out of order. Hefley at the time was writing articles for Moody Monthly and Christianity Today.

“Every year I would follow [Jim’s] report,” Lewis said. “It was by far the most fair and accurate. He really bent over backwards to give a fair hearing to both sides of the issue.” At that time “The Hefley Report” ran as a full-page piece in the Indiana Baptist newspaper produced by the State Convention of Baptists in Indiana.

After Volume 3 was published, Hefley’s books were banned from the Baptist Bookstore (now LifeWay Christian Resources).

That political move was particularly difficult for Hefley, who in an interview the year before he died, spoke candidly about his life before Christ.

He was born on the grounds of the Chillicothe Federal Reformatory in Ohio, where his father was imprisoned for ordering guns purchased with forged checks. Years after his father’s release, Hefley started his own gambling business in the Ozark town where he grew up.

Known first as “fessor” for graduating from Mt. Judea high school, a one-room schoolhouse, at 13, and later as “blackjack” for running a gambling operation, Hefley said there wasn’t much to learn after being tutored by his school teacher mother in their log cabin – especially after the local sheriff shut down his makeshift casino.

It was in that same log cabin where Hefley grew up that Ottis Denney, a Southern Baptist home missionary, challenged the book-smart Arkansas Tech student to read the Bible. Hefley was hooked.

“I quit the gambling business and smashed up my slot machines,” Hefley smiled, wrapping his thumbs around ever-present suspenders reminiscent of the denim overalls he wore out when he was young.

It took a week at a State Youth Assembly with other young men like Glendon Grover, John McClanahan, T. W. Hunt, Tom McClain and James Pleitz for him to make sense of a religious heritage that included a Pentecostal uncle, Jehovah’s Witness aunt, and inactive Church of Christ parents.

“I honestly don’t know where I would be,” Hefley said. “My ambition was to go to Las Vegas or Reno and run a gambling business.”

Hefley recognized God’s call on his life, and after earning a bachelor’s degree at Ouachita (Ark.) Baptist University at age 17, he spent years planting churches, writing radio shows and filling pulpits before his writing career took off.

After being forced to wait until he was 20 to enroll, Hefley earned the master of divinity degree from New Orleans Baptist Theological Seminary. Later he earned the Ph.D. in mass communications from the University of Tennessee.

The Truth in Crisis series, he said, served as an “awakening.”

Hefley didn’t get angry, however. Instead he recalls having a ball cap made that read, “I love the Baptist Bookstore” to wear around the convention floor at the 1986 SBC annual meeting in Atlanta. “Evangelicals are a strange race,” he laughed.

Throughout the years, Hefley served as pastor of small Baptist churches in Louisiana, Tennessee and Missouri, and in 2000 stepped down from the pulpit of the tiny South Union Baptist Church in Maywood. He founded both Pontchartrain and Lakeside Baptist Churches in New Orleans.

James T. Draper Jr., past president of LifeWay Christian Resources, said at the time of Hefley’s death that his reporting made a difference. Draper was the third conservative SBC president during the Conservative Resurgence.

“More than anyone else, he impacted the entire movement with his careful chronicle of the resurgence in his books,” Draper recalled. “He documented the need and the efforts to initiate changes in the SBC.

“Through all these … years he has been a cherished friend who I have always believed represented the finest in reporting and journalistic endeavors. He will be greatly missed, although his influence will always be evident.”

“For him, journalism was a tool to serve Christ and His church,” Chapman said. “He never allowed journalistic aims to trump his Christian convictions. …

“Through his series of books, The Truth in Crisis, he helped thousands of ordinary Baptists understand the reformation that was taking place in our denomination and, thus, motivated them to join in the battle for the truth of God’s Word.”

Paige Patterson, a key figure in the Conservative Resurgence and the former president of Southwestern Baptist Theological Seminary, remembered the impact of Hefley’s work, and how, with a “sixth sense,” he cut to the core of important issues.

“Jim Hefley appeared on the scene at a critical moment in the life of the conservative revival,” Patterson said. “He began to write about it at a time when the entire movement had been interpreted through the lens of the opposition. Probably as much as any single avenue, his first volume regarding the conservative movement became the catalyst of understanding for thousands of laypeople. We, in turn, use that volume still today.”

Journalists and writers outside of the denomination have also acknowledged Hefley’s contribution to the course change in the SBC. The late Jim Jones, a veteran writer for the Fort Worth Star-Telegram, had called Hefley a “passionate, hard-working journalist who courageously spoke up for what he believed.”

Jones had said Hefley’s books on the SBC controversy had “a huge impact,” but the long-time Missouri resident also will be remembered for his writings on former president Jimmy Carter and other subjects, with which he often collaborated with his wife, Marti, to complete.

“What I will remember most about Jim, though, was his warm personality,” Jones recalled. “Until his illness, Jim would be one of the first persons to greet me in the newsroom each year at Southern Baptist Conventions. We would grab a cup of coffee and hash out what was happening in one of the great American denominations. I will miss those conversations and friendly coffee breaks with my friend Jim.”