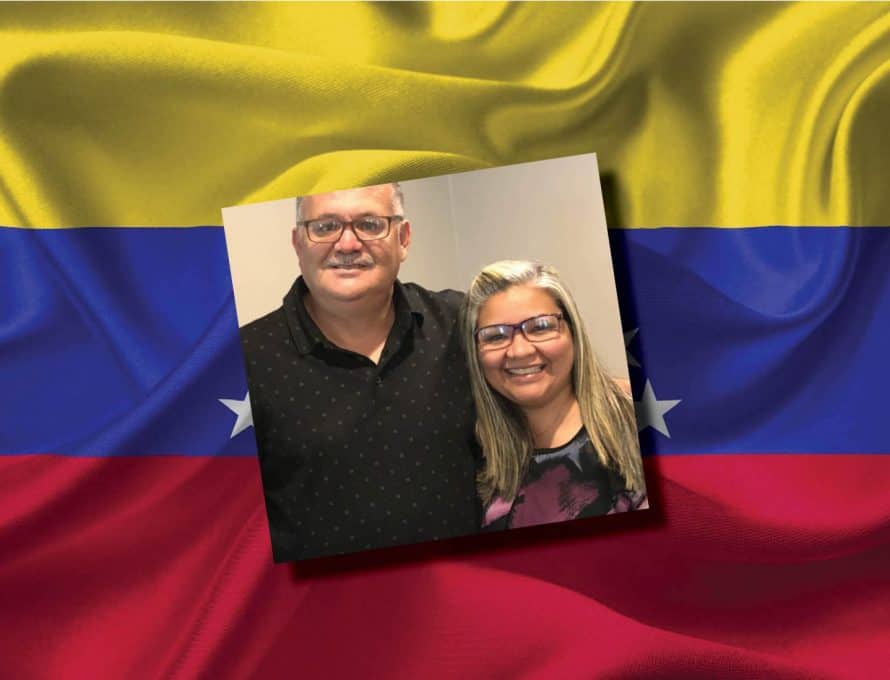 BARQUISIMETO, Venezuela – Amid political and economic crises in Venezuela, one month’s salary can buy a carton of eggs and a small block of cheese. Inflation rates are spiraling above 1 million percent, and earlier this year the International Monetary Fund predicted that inflation could reach 10 million percent in the nation.

But for one Venezuelan pastor and his wife, this turmoil can’t prevent God from working in his homeland.

Vargas is the nephew to Missouri pastor’s wife, Ruby Boyer, who is also from Venezuela. Ruby and her husband, Pastor Ronald Boyer of New Melle Baptist Church, began to correspond in 1996 and were married the following year.

Last month, Vargas and his wife, Mariana, visited the Boyers and shared with The Pathway about their ministry in Venezuela. Vargas said their church aims at making disciples throughout Barquisimeto and developing leaders at the church through various small groups. The goal used to be baptism, but now it’s spiritual formation.

“We want to prepare every member of the church to become a leader,” Vargas said. “God isn’t going to send new people into the church if there’s no leaders there to take care of them.”

This model of making disciples and developing leaders in the community of the church has helped them to reach out to their city amid the nation’s crisis. Members of the church’s small groups care for one another’s needs.

Yet the need is great. “The need is so big,” Vargas said, “that those who are self-sufficient have been toppled, humbled.” Resources are scarce, and some people faint from hunger during church services.

A report from Baptist Press described Venezuela’s crisis, May 13: “Nearly 90 percent of families in Venezuela can’t buy the food they need to survive, National Public Radio said May 1, citing the latest Life Conditions National Survey conducted by college professors in the South American nation. According to the 2019 National Survey of Venezuelan Hospitals, released March 10 by Doctors for Health, 1,557 Venezuelans died in the past year from a lack of basic medical supplies and 79 died because of electrical outages.”

But amid their plight, Vargas added, Venezuelan Christians have learned anew to depend on God for everything, and they have learned to love one another.

“The church has learned to give,” he said, reporting that the congregation provides 6,000 meals for people each Sunday. “We have learned to live by faith in hard times.”

Boyer told The Pathway that New Melle Baptist has sent support and prayed for the church and for the nation of Venezuela. When the political situation settles and opportunity arises, they hope to further develop their partnership in the region, he added.

According to Baptist Press, Baptist Global Response (BGR) has also responded for nearly two years to the Venezuelan crisis that was exacerbated under the presidency of Nicolás Maduro, whom opposition leader Juan Guaidó failed to topple in an April uprising.

“Thanks to our Southern Baptist Global Hunger Relief (GHR) initiative, we have been able to meet many critical food needs of our Venezuelan brothers and sisters,” BGR Executive Director Jeff Palmer told Baptist Press. The Baptist relief organization has provided nearly $200,000 worth of food, he said, and has helped Venezuelan Baptist partners minister to those suffering.

“It has been difficult for outsiders and foreigners from places like the USA to do much inside the country,” Palmer told BP. “But the local churches and believers have taken up the challenge to feed their fellow Venezuelans and do so in the name of Jesus. Southern Baptists have come alongside them and helped to provide the needed resources that in many cases is the difference between life and death.”

And behind the political and economic crises in the country, spiritual battles are raging, Vargas told The Pathway. For this reason, he asks Missouri Baptists to pray for Venezuela and for the church there. He described Venezuela’s turmoil as God’s process of cleansing the country, preparing – he hopes – for a spiritual revival. He encourages Missourians to pray that the people of Venezuela stop depending on themselves and turn wholeheartedly to God and that God’s people would have the wisdom to discern God’s will amid the crises there.

(This article includes reporting from Diana Chandler of Baptist Press.)