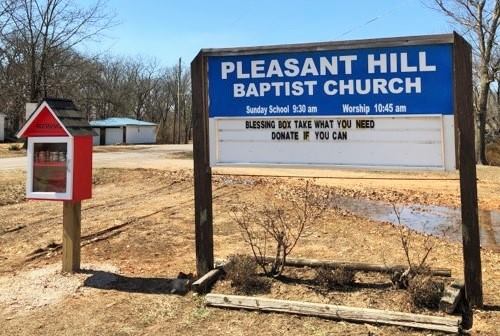 JEFFERSON CITY – The ‘Blessing Box’ outside Pleasant Hill Baptist Church offers a way for someone in need of food for themselves and their family to get immediate help. Pathway photo by Kevin Kohler

JEFFERSON CITY – Take what you need; donate if you can. That’s the simple idea behind Pleasant Hill Baptist Church’s Blessing Box.

Kevin Kohler, Pleasant Hill’s pastor, had seen similar boxes online for several years. He thought it might be a good way for the church of about 50 on a Sunday morning to be a blessing in their rural community south of Jefferson City.

The first few weeks, Kohler and his wife kept the cabinet stocked.

“But now it’s sustaining itself,” he said, “from church members and other people in the community. People are putting things in and taking things out.”

Pleasant Hill is next door to a Dollar General store, and Kohler said he regularly sees people walk straight from the store to put something in the Blessing Box.

One woman called him to say that a family had moved in with her and was “in dire need,” Kohler said.

“That day the box was full, and we basically just emptied it out and gave it all to her,” he said. “They were very grateful. But as she was leaving, she said, ‘When things get better, I will be putting some things back in there.’”