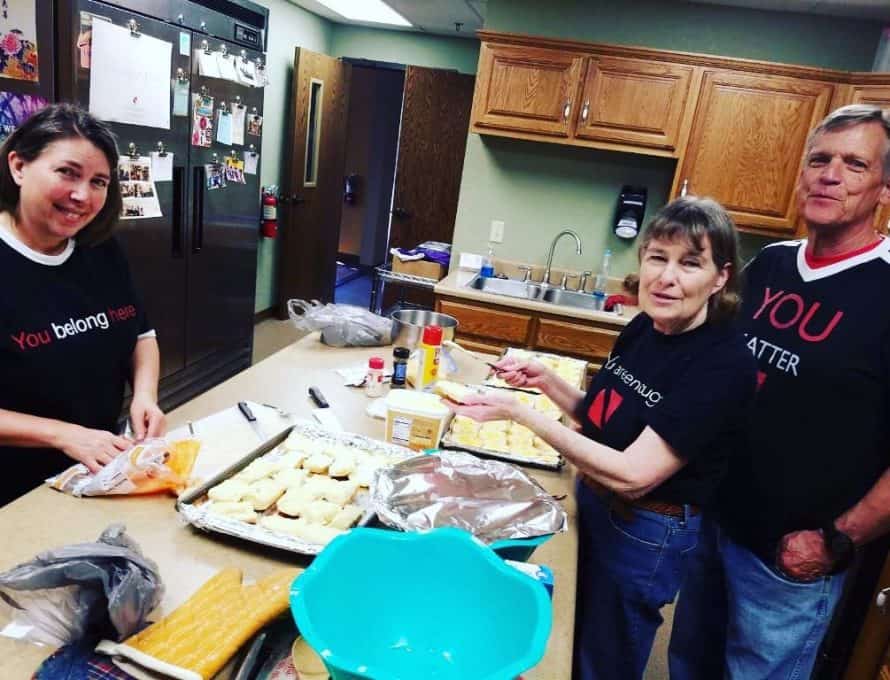 KIRKSVILLE – The Baptist Student Union at Truman State University believes hungry university students need nourishing food in the middle of their week of final exams at the end of a semester. They have been ramping up this “Food for Finals” effort the last several years and now feed about 200 TSU students over the course of three days of finals weeks.

Greg Xander, campus missionary at the BSU said they started about eight years ago providing some snacks during “reading day” (a day of study for the students in preparation for the final exams). “Some of the students were getting low on their meal plan tickets and we wanted to help,” he added.

John and Margie Kues help Xander and a few others get the food ready for the students. Kues says he cooks and serves for about 4 days solid each semester. He feels like it is a way to give back to the Lord as they serve in the BSU ministry. John and Margie have been Christians for about eight years and they love interacting with the BSU students and sharing Christ with them.

Kues and his wife, grew up in St. Louis. He was a Catholic, raised in a German neighborhood. He started washing dishes and cooking in a neighborhood eatery when he was 15. Cooking has always been a passion for him. He met Margie in a community college there and they were married. They took jobs in northern Missouri and have stayed there through teaching and government service careers.

At age 60 they gave their lives to Christ after having several spiritual conversations with Xander, who they met at Margie’s public school in Queen City. After several months they prayed to receive the Lord and joined Hamilton St. Baptist Church, Kirksville. Now retired they volunteer at the BSU all year round.

Xander remarked, “Here’s a guy and his wife, whose lives are changed….so different from the 50 years prior. We are so encouraged by them.”

John and Margie, along with Dana Marshall, Barbara Robinson and a few others join in every finals week to cook good healthy food for the Truman students. Some Kirksville area churches help by donating some of the desserts.

At the beginning of the school year the BSU hosts all the Truman international students for a dinner in conjunction with the International Students Association. Xander is able to give a short talk and explain the BSU. He says it is a welcoming place where love is shown to all. The Kues always have a fine buffet of American food laid out. Last fall there were students from Vietnam, China, Denmark, France and Korea present.

At the Food for Finals this fall students clustered around the tables talking and de-stressing during the intense week at the university. In the early years (2013-14) they might have seen 30-40 students come in to eat. Every year they have gained a few more, Xander said.

“The Greek sororities and fraternities have really been coming over, along with students from CRU, Campus Christian Fellowship and the Navigators,” Xander said. Some know the Lord, but many don’t. They mingle and talk then stuff their pockets full of candy as they leave.

Appreciation is expressed to Xander and the Kues family. One young lady had tears in her eyes as she said, “Thanks. You are reaching every corner of this campus.”

The payoff for the BSU leaders is seeing the seeds planted in the mealtimes come to harvest. One young lady asked Jesus into her life after attending a state BSU conference this winter. She prayed for “God to be in my life” in her dorm room the next week. Xander and Kues say that makes all the cooking, pot-scrubbing and table arranging worth it all.

Kues said, “I have been a Christian for about 8 years and I don’t have to go overseas to be a missionary. They are coming to me.”