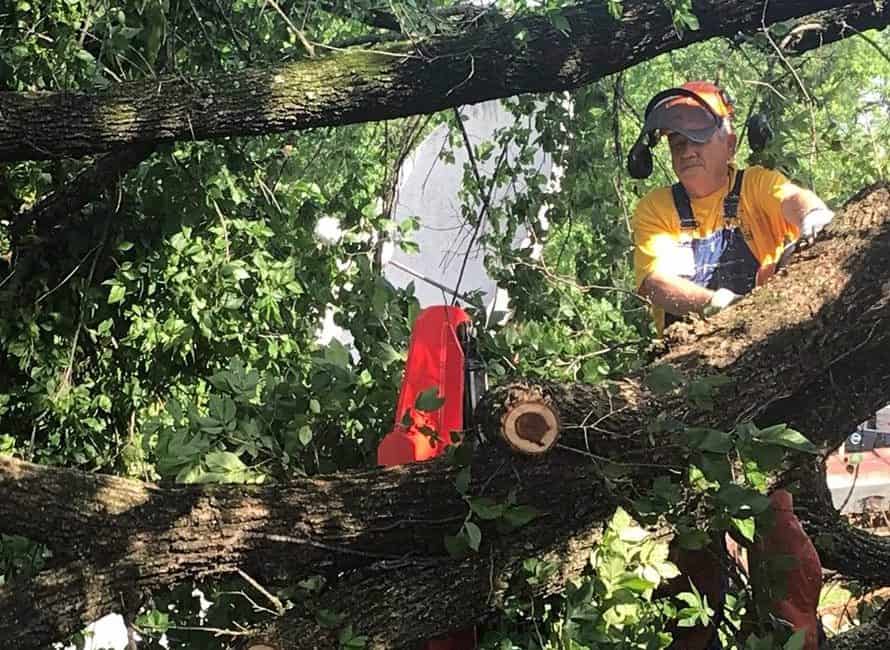 CARL JUNCTION – A Southern Baptist Disaster Relief volunteer from the Spring River Baptist Association of nearby Joplin, Mo., removes tree debris from the property of a Carl's Junction, Mo., homeowner. Disaster relief volunteers are active in multiple states, sharing practical help and the love of Christ in communities impacted by a slew of tornadoes and flooding in the Midwest this week. Photo provided by Sam Porter/NAMB

CARL JUNCTION, Mo. (BP) – Just days after devastating storms hit the Midwest earlier this week, Southern Baptists have mobilized to help homeowners and share the Gospel of Jesus Christ in the impacted areas.

On Monday and Tuesday (May 20-21), a violent storm system swept through the central United States producing 97 tornadoes and leaving at least eight dead. The storms have led to extensive flooding throughout the region, too.

Missouri Baptist Disaster Relief teams are set up in the state’s capital, Jefferson City, and Carl’s Junction. Carl’s Junction, near the Oklahoma and Missouri border, was hit Wednesday night (May 22) when a tornado started southwest of town and moved northeast through Carl Junction, Oronogo and Golden City.

Carl Junction is about 4 miles north of Joplin, Mo. The storm came eight years to the day after an EF5-rated tornado hit Joplin killing 158 people.

“What happened [in Carl’s Junction] is a tornado came in and over a hill and hit a very populated area,” said Ron Crow, pastor of First Baptist Church of Diamond, and a part of the Missouri Baptist Disaster Relief team ministering in the area.

“It wasn’t a widespread area, but it was very populated. There were a lot of mature trees. It didn’t do tons of structural damage, although it did some, but it did a lot of tree damage, a lot of limbs everywhere.”

Crow, who is the incident commander, and others on the Missouri Baptist chainsaw teams are helping impacted homeowners remove trees and other debris from properties. When they have the opportunity, they are also sharing the Gospel.

Crow and his team from the Spring River Baptist Association in Joplin were able to help the principal of the school where his wife works remove some large trees that were down in the yard. After their help, the principal sent a grateful text message: “Oh my! There are no words for what a blessing your crew was to the Shelleys today. That’s something you truly have to see in action to understand. Thank you from the bottom of our hearts. You were truly the hands and feet of Jesus today.”

Crow says that other homeowners have been similarly appreciative of Southern Baptists’ ministry in the area.

“It’s a 19-mile long stretch of damage and three-quarters of a mile wide,” said Gaylon Moss, the director of Missouri Baptist Disaster Relief. “But it also contains a number of commercial and industrial properties. Some of the houses we’ve seen have been completely destroyed and others just have some tree damage, no structural damage. It really runs the gamut as far as types of damage in this area.”

Moss says Missouri Baptists hope to point people to Jesus through their response to the tornadoes. He notes an interaction yesterday between a volunteer and a homeowner who was surprised to see help so quickly.

“Wow! You’re Christians and do that?” the man told the volunteer.

Moss says that interaction illustrates their desire to move people one step closer to Jesus through their ministry.

“For some people, that means, ‘Wow, there’s a God!’ For others, it’s praying to receive Christ. You’re always trying to move people forward,” Moss said. “There are little small seeds that get planted all along the way, and you never know what will come from it.”

Over the last 36 hours, 36 tornadoes have hit Oklahoma, which has led to record flooding throughout the state and numerous evacuations, particularly around the Tulsa metro area.

Don Williams, the Oklahoma Baptist Disaster Relief Director, says Oklahoma Baptists have mobilized chainsaw teams to a number of locations throughout the state, including Peggs, Leach, Jay, and North Tulsa.

“God can make something good out of a disaster,” Williams said. “Southern Baptists are known for working through disaster to be he hands and feet of Jesus. We have a great opportunity to do that in Oklahoma, Missouri, and Arkansas at this moment.”

Williams added that Oklahoma has already contacted the Southern Baptists of Texas Convention and Arkansas Baptists about helping with these recovery efforts. He expects the efforts to continue throughout the summer.

Sam Porter, the national director of Southern Baptist Disaster Relief, says there will be additional needs in southeast Kansas.

“They are going to need a lot of help,” Porter said. So any teams, even high school or college teams, that would like to go and help, they really need it. It’s flooded all the way from the Kansas City border down to the Oklahoma border and all down southeast Kansas along the Missouri border.”

The North American Mission Board is responsible for coordinating national responses by Southern Baptist Disaster Relief, which is one of the three largest providers of disaster relief volunteers in the United States.

NAMB utilizes partnerships with 42 Baptist conventions that operate in all 50 states to gather volunteers and respond to disasters, providing hot meals, chainsaw and mud-out relief work and other services.

JASPER – This screenshot of a Facebook post reportedly shows what remains of Zion Baptist Church, Jasper, and its parsonage, which were damaged during a May 22 tornado here. According to one Facebook post, “there used to be a parsonage where that van is parked. The tornado took it away.”

As reported previously by The Pathway, the building and parsonage at Zion Baptist Church of Jasper, a small town located northeast of Joplin, was damaged by a May 22 tornado that hit that region of the state. Residents of Jasper shared photos on Facebook, showing the damage to the church. They also said the parsonage was completely destroyed. “The tornado took it away,” one person wrote on Facebook.

Kirk Baker, Director of Missions for the Spring River Baptist Association, told The Pathway on May 28th that the congregation at Zion Baptist here voted earlier this year to close the doors of the church (for reasons unrelated to the tornado), though The Pathway does not have a precise date for the closure. Their pastor, Sam Etcheson, moved to Texas earlier this month. Nevertheless, one person was in the parsonage when the tornado hit. “He is in the hospital with some broken ribs,” Baker said.