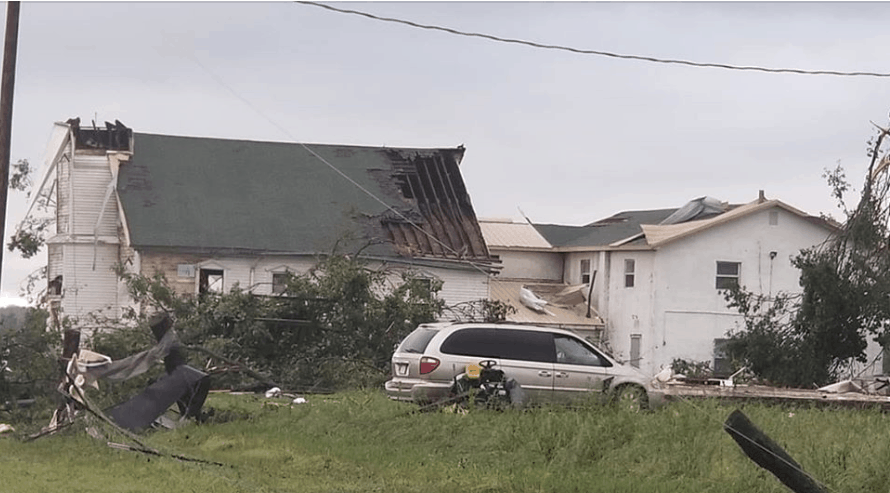 JASPER – This screenshot of a Facebook post reportedly shows what remains of Zion Baptist Church, Jasper, and its parsonage, which were damaged during a May 22 tornado here. According to one Facebook post, "there used to be a parsonage where that van is parked. The tornado took it away."

EDITOR’S NOTE/UPDATE: Kirk Baker, Director of Missions for the Spring River Baptist Association, told The Pathway on May 28th that the congregation at Zion Baptist here voted earlier this year to close the doors of the church (for reasons unrelated to the tornado), though The Pathway does not have a precise date for the closure. Their pastor, Sam Etcheson, moved to Texas earlier this month. Nevertheless, one person was in the parsonage when the tornado hit. “He is in the hospital with some broken ribs,” Baker said.

JASPER, ELDON – A rural Missouri Baptist church and parsonage in Southwest Missouri were reportedly damaged by a tornado that touched down in the region, May 22.

Meanwhile, Missouri Baptist churches are reaching out as thousands of homes are still without power in the aftermath of another May 22 tornado that devastated the community of Eldon, a town located roughly 30 miles southwest of Jefferson City.

The building and parsonage at Zion Baptist Church of Jasper, a small town located northeast of Joplin, was damaged by a May 22 tornado that hit that region of the state. Residents of Jasper shared photos on Facebook, showing the damage to the church. They also said the parsonage was completely destroyed. “The tornado took it away,” one person wrote on Facebook. It’s unclear whether anyone was currently living in the parsonage.

Kirk Baker, Director of Missions for the Spring River Baptist Association, told that Pathway that he had only heard that the parsonage was hit. He said he has been unable so far to connect with church staff at Zion Baptist Church to confirm the extent of the damage. The Pathway also has been unable to make contact with the church’s pastor, Sam Etcheson.

In Eldon, many homes are destroyed, many are without power, and grocery stores and gas stations are shut down, according to Pastor David White of First Baptist Church, Eldon.

Eldon was hit, May 22, by the same storm that travelled northeast along US 54 and hit sections of Jefferson City, including the capital’s historic district downtown – just east of the Missouri Baptist Convention’s Baptist Building, which was unharmed by the storm.

White told The Pathway that the building at FBC Eldon, located downtown, was unharmed by the storm, although the building was without power until mid-morning yesterday (May 23). However, the area of town south and east of downtown were hard-hit by the storm.

“We’ve had several families (in our church) that have lost most of their home,” White said.

The church, White said, is working to care for members who are suffering as a result of the storm, and they are joining many people in the community who have come out to help with clean up. The church is also providing childcare for people in the area who need a place for their children to go while they work.

White added that he’s been in contact with Missouri Baptist Disaster Relief leaders and is helping them to assess needs in the area.

To donate to Missouri Baptist Disaster Relief’s efforts to bring hope in the aftermath of the May 22 tornadoes around the state, visit www.mobaptist.org/dr.