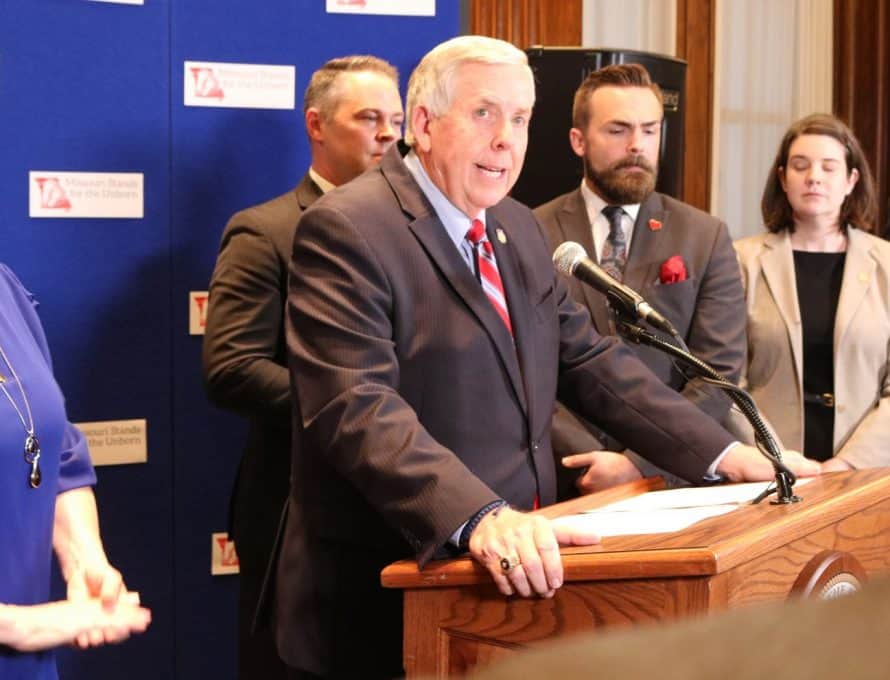 JEFFERSON CITY – Gov. Mike Parson urges the Missouri Senate to pass pro-life House Bill 126 during a press conference in his office at the state Capitol, May 15. “It’s a God-given right to live,” he said. “I truly believe that. And I’m not afraid to say that in front of anyone.” (Pathway photo by Benjamin Hawkins)

JEFFERSON CITY – Missouri Baptist Convention (MBC) leaders are grateful for the passage of a state pro-life bill that contains the most expansive restrictions to abortion in the state’s history.

“This piece of legislation … was important— not for legislators, not for the governor, not for Missouri economics—but for yet-to-be-born children,” MBC Executive Director John Yeats told The Pathway. “My family and I are very grateful for the fortitude of our pro-life Senators and our pro-life Governor to place Missouri among those states that are known for making a safe haven for little girls and boys living in their mother’s womb.”

House Bill 126, sponsored by Representative Nick Schroer (R-O’Fallon), was passed by the Missouri House of Representatives in February and was advanced by committee to the Senate last month.

Missouri’s Senate passed a revised version of the bill, May 16, in a 24-10 vote, sending it back to the House for approval. The House approved the revised bill today. Now, it heads to the desk of Gov. Mike Parson, a member of First Baptist Church, Bolivar, who has signaled his intent to sign the bill.

“I want to thank everybody for being here today to take a bold stand for life and to celebrate the victories that we’ve made,” Parson said in a press conference, May 15, urging the passage of HB 126. “Don’t lose your commitment to protecting life. Because until the day that we no longer have abortions in this country, I will never waver in the fight for life. …

“It’s a God-given right to live,” he added. “I truly believe that. And I’m not afraid to say that in front of anyone.”

HB 126 establishes the “Missouri Stands for the Unborn Act.”

“We thank the Missouri House and Senate for their commitment this session to increase protections to unborn children and their mothers and to Governor Parson for his strong commitment to pro-life legislation,” she said.

Klein provided the following outline, detailing the key measures of HB 126, as passed by the Senate. The legislation, she said, will:

Pathway editor and MBC Public Policy Advisor Don Hinkle – who remained at the Capitol alongside other pro-life advocates during the Senate’s nearly 20-hour debate of the bill – echoed Klein’s sentiments.

But according to Hinkle and Yeats, Missourians should continue to fight for the unborn until abortion is non-existent.

“Even in ancient civilizations,” Yeats said, “there have been those so depraved and broken that they kill their young. King Solomon told us that one of the most despicable things to God is ‘hands that shed innocent blood.’ What could possibly make us think that killing innocent children in the womb is somehow acceptable? Unless you lie to others and to yourself, abortion kills an innocent child, a person. …

“In Missouri, every day 8.2 children die because of elective abortion. We must remain vigilant until every child is safe in his/her mother’s womb. We must also be much more caring for every mother whose life circumstances are so tragic that she would contemplate a medical procedure or abortifacient to end her child’s life.

“I’m grateful and support ministries like the Missouri Baptist Children’s Home and others who come beside a woman in a crisis and help her walk through the pain of tough circumstances that most of us cannot imagine. These important helpers at crisis pregnancy centers and adoption agencies give a child whose mom faces difficult circumstances, hope to fulfill their God-given potential.”

Missouri is the latest of several states – including Ohio, Mississippi, Arkansas, Utah, Georgia, Kentucky and Alabama – that have increased restrictions on abortions in recent months.

“There is much to do in the media about these bills that will set the stage for overturning Roe,” Yeats said. “Roe will be overturned. It was based on a fabricated right that fails constitutional muster especially when you consider the origin of a human life.  Decades ago medical technology stripped away the junk science used to justify Roe—that has contributed to much moral decay of this culture that continues to kill its young, as if it has a right to do so.”