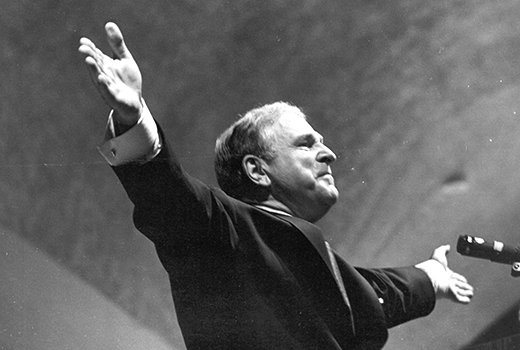 EDITOR’S NOTE: This is the eighth article in a year-long series, commemorating the history of the Conservative Resurgence of the Southern Baptist Convention (SBC) in honor of its 40th anniversary. To read previous articles, visit www.mbcpathway.com/ConservativeResurgence.

Nor could science change the truthfulness or relevance of Scripture, Criswell, then pastor of the First Baptist Church, Dallas, declared. On New Year’s Eve, 1972, in a sermon on “The Infallible Word of God,” he told his congregation how he’d read about dust samples that astronauts had collected from the moon. The moon dust, he said, was full of highly reflective titanium and looked like “tiny droplets of glass.” No wonder, then, that the moon so clearly reflects sunlight, especially since it has “no atmosphere to becloud the glory of its shining.”

“In other words, the Bible is correct when it says that the moon is nothing but one great, big, vast, giant, luminary reflector. That’s what the Book says. And did you know,” Criswell quipped, “if the American government had asked me about it before they sent out the Apollo … had they asked me, I could have saved the American taxpayer six billion dollars!”

Criswell – who since 1944 pastored one of the Southern Baptist Convention’s (SBC) largest churches – presided over the SBC annual meeting in 1969 and 1970. And during his first term, he published a book that, according to historian Timothy George, “fell like a bombshell on the theological landscape of the day.”

Indeed, Criswell’s theological bombshell landed in a convention embroiled, once again, in controversies centering on the truthfulness of Genesis. 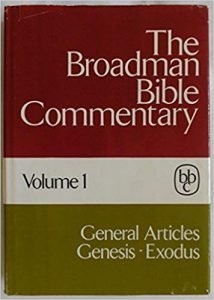 From 1969-1970, denominational angst provoked less than a decade before by Ralph Elliott’s infamous Message of Genesis stirred once again among Southern Baptists. The cause: Broadman Press published its first volume in a 12-part commentary series on the Bible. Like Elliott’s Message of Genesis, the new Broadman Commentary on Genesis – written by British Baptist Gwynne Henton Davies of Park College, Oxford – adopted a higher critical approach to the text and message of Scripture.

At the crux of the renewed debate in the SBC was Davies’s skepticism about Abraham’s “proposed sacrifice of Isaac” in Genesis 22:1-19. Davies concluded, contrary to Scripture’s claim, that God could not and did not demand Isaac’s sacrifice. Instead, this incident arose as “the climax of the psychology of [Abraham’s] life.” Fearful that he would lose his only son, Abraham played out his fears by imagining that God wanted him to sacrifice Isaac. Then, before putting his son to death, Abraham spotted a ram caught in the nearby brambles – a discovery that resolved his psychological tension and saved his son’s life. 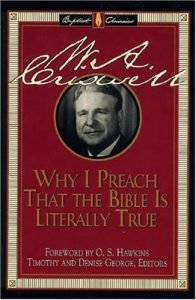 Though he accused no one by name, Criswell’s “bombshell” of a book, Why I Preach that the Bible is Literally True, pinpointed the threat introduced into the SBC by the Broadman Commentary on Genesis:

“The divine origin of the Scriptures is now disputed in the name of scholarship, science, and religion,” he wrote. “This is being done by those who profess to be friends and champions of the Word of God. Much of the learning and theological activity of the present hour is dedicated to the attempt to discredit and destroy the authenticity and authority of God’s Word. The result of this is that thousands of nominal Christians are plunged into seas of doubt. Many of those who are paid to stand in our pulpits and defend the truth of God are now the very ones who are engaged in sowing seeds of unbelief and destroying the faith of those to whom they minister.”

Criswell “minced no words in assailing” theological views that called the truthfulness of Scripture into question, according to James C. Hefley in his classic series on the Conservative Resurgence, The Truth in Crisis.

“Moderates,” Hefley wrote, “said the Biblical text was bound to the scientific ignorance of the writers’ times. Criswell declared, ‘there is no contradiction in the Bible to any fact of science.’

“Moderates,” he added,” held Genesis 1-11 to be non-literal ‘faith history.’ In the context of discussing early Genesis, Criswell said ‘no small part of our problem [in seeing errors] lies in our stupidity.’”

Responding to this conservative onslaught, the Association of Baptist Professors of Religion “passed a formal resolution blasting [Criswell’s] book and excoriating the Baptist Sunday School Board for publishing and promoting it,” according to historian Timothy George. These professors, alongside likeminded critics of Criswell, formed the “E.Y. Mullins Fellowship” and aimed to prevent Criswell from winning a second term in office. But Criswell was re-elected by a vote of 7,483 to 450, and the “E.Y. Mullins Fellowship” soon disbanded.

Meanwhile, with encouragement from Criswell’s strident conservatism, Southern Baptist messengers pressured the SBC’s Sunday School Board to remove the controversial Genesis commentary. In July 1970, the board voted “to withdraw this volume from distribution,” yet it also asked Davies to rewrite the volume.

Displeased by this decision, conservatives then called on the board to find a new author for the Genesis commentary. The board indeed found a new author, but it also compromised with Davies by allowing a British publisher to reprint the old commentary outside of the United States.

“Conservatives,” Hefley recounted, “were infuriated when they found out about the deal.

“Conservatives could look back over the past decade in frustration,” he added. “They had won almost every vote on the Bible issue at the Southern Baptist Convention, but it seemed little had been accomplished with the agencies, particularly the Sunday School Board and Midwestern Seminary. Elliott had not been discharged for teaching the Biblical text was errant, but for taking his book to another publisher. The Sunday School Board had stood by its position of publishing books by both inerrantists and errantists. In reviewing the ‘tragic’ decade, conservative Bill Powell would later reflect that nothing had changed: ‘… The generals are running the SBC while the troops are financing it.’”

But only a decade after Criswell dropped his bombshell amid theological controversy, the SBC’s troops would successfully call their generals back to belief in the Bible as literally true.