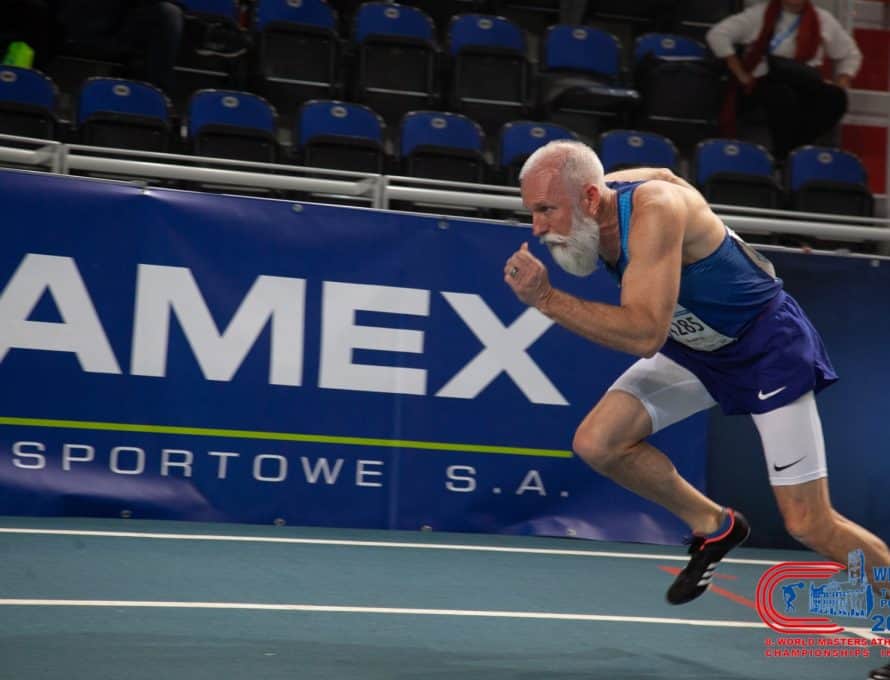 TORUN, Poland – After placing first in the 2019 USATF Indoor Masters National Championship for the 400 meter race, David Pitts went to Poland to compete against athletes from across the globe. He brought home three bronze medals. Photo courtesy of David Pitts

MEHLVILLE – Less than a year ago, St. Louis-area pastor David Pitts took home the gold from the USATF Outdoor Masters National Championship, earning the number 1 ranking worldwide in the 55-59 age bracket for the 400-meter race. He placed first once again for the 400-meter in the 2019 Indoor National Championship, March 1-3, in Winston-Salem, N.C.

Then, with church members cheering him on from the worship center at ROC Ministries here, Pitts competed with athletes across the globe during the 2019 World Masters Athletics Indoor Championships, March 24-30, in Poland. During the competition, he caught the eye of media outlets – and not merely for what one reporter called his “magnificent beard.” 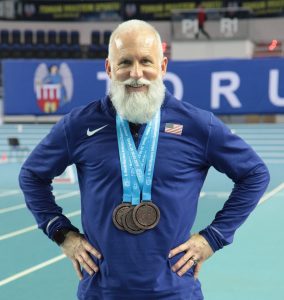 “I haven’t even been doing this a year yet, and I’ve already experienced some great success,” Pitts said. “It was a great experience to be on Team USA.

“The proudest moment for me, I guess you could say, was when for the first time I stepped onto the track and heard the announcer say, ‘Representing the United States of America, David Pitts,’” he recalled, comparing that moment to his graduation from Basic Training in the military.

Because his preliminary race occurred in the middle of a worship service at ROC Ministries, former Missouri Baptist Convention staff member Ben Hess – who was preaching for Pitts that day – broadcast the race during the service for church members to watch.

“I heard people were cheering and yelling for me,” Pitts said. “Everybody I told at the meet, my track teammates, they were saying how cool it was that a church would support me in that way.”

Prior to running at the Masters National Championships last July, Pitts hadn’t competed for nearly 35 years. But, since that time, he’s been reminded of the importance of training – not only as an athlete, but also as a Christian.

“You have to be committed to something to succeed,” Pitts said. “There are days when I don’t feel like training, when I wake up not feeling that good. Yet I’m still on the track. If you’re going to do something and you want to do it well, you have to train for it.” The same truth, he added, also applies to the Christian life.

As such, Pitts strives to run a good race as a Christian, pastor and local high school coach, but he intends to keep up his training as an athlete, as well. Next month, he plans to compete in four events at the St. Louis Senior Olympics and is entering two other competitions in June. Then comes the 2019 USATF Masters Outdoor Championships in July.

“I’m by no means anywhere close to stopping,” Pitts said. “I’m stronger this year than I was last year. … I’m really excited to see what I can do in the outdoor season.”