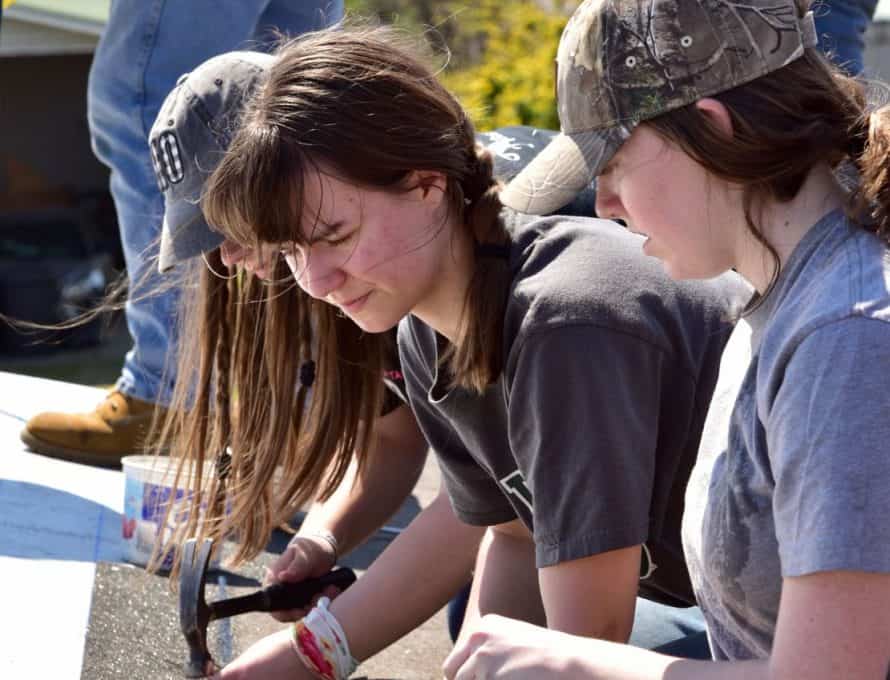 The team, which also consisted of three adult chaperones, drove from Joplin to Panama City, Fla., where the city and surrounding area remain largely in ruins. MSSU students joined forces with students from other colleges in a week-long effort organized by the North American Mission Board’s GenSend ministry.

Hurricane Michael tore through the Florida Panhandle in October 2018, but Jon Smith, the college’s BSU director and trip leader, wrote that certain areas looked like the storm had just passed over the horizon. 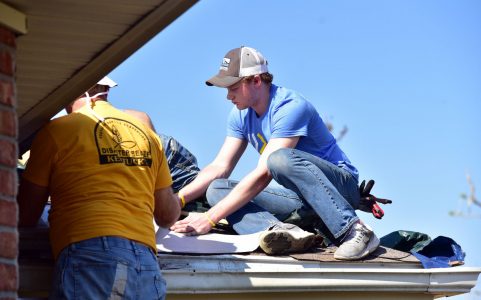 “The devastation we’ve seen at and around our worksites is unbelievable,” he wrote on his blog detailing the trip.

“Those familiar with the Joplin tornado will understand the suffering of a community literally torn asunder. “Only it wasn’t a single community. It was dozens, if not hundreds of communities.”

After arriving, the team split into two groups. Lance Plaice chaperoned the first group, which moved to a new site each day. One morning as they were driving to their work location, Plaice asked the students to spend a few minutes silently taking in the scene.

“I challenged them one morning, and I told them, lets’ just look outside and let’s just grasp what we’re looking at,” Plaice said.  “Think of the impact it has on people’s lives.”

Plaice said the sights left a deep impression, and the team worked hard to make an impact of their own.

Each day the group tackled a new project. One day the team worked in a church replacing floors and checking church library books for damage and mold. Another day they helped a man build a fence in his yard so that his dogs would no longer have to live inside the house. Digging out tree roots and pouring a concrete driveway also made their long list of completed projects.

“You grow closer to Christ when you serve people in the name of Christ,” Plaice said.

“The satisfaction and the closeness I felt doing the Lord’s work—I’ve never felt that.”

The other group of students worked on the house of a Mexico Beach woman whose home was severely damaged when a tree fell through her roof. In addition to helping her with roof repairs, the team sought to build a relationship with the woman as a gateway for the gospel.

Each day the team spent time on site doing a devotion. At the beginning of the week the woman made a point to leave the team alone. But by the end of the week, the students had built enough of a relationship with the woman that she decided to join them. Smith said that a pastor in the area knew about their work and intended to follow up with the woman after they left.

Maggie Brister, an MSSU student who worked on the woman’s house, spoke with a NAMB representative on the last day of the trip.

“I don’t really know what I was expecting coming into it,” Brister said. “I just wanted to serve people.”

She believes God used the students to offer hope to the woman in what seemed like a hopeless situation.

“Being able to do just a little bit to just slightly restore their hope, just one little act of kindness at a time, has been a blessing, such a blessing,” Brister said.

Smith believes that the trip provided BSU students with an incredible opportunity to bond with each other and get a taste of what it looks like to serve and share.

“Students are already asking, ‘Where is the next opportunity?’” he said.

Susan Peugh, who serves as the collegiate and volunteer opportunities coordinator for NAMB’s Send Relief arm, said that the GenSend program fits well with the desire many students have to live on mission.

“It is just natural for students to want to serve,” Peugh said.

If you are interested in learning more about the GenSend program, you can visit their website at www.gensend.org, or visit www.namb.net. You can read more information about the trip on Jon Smith’s blog at https://mosobsu.com/.