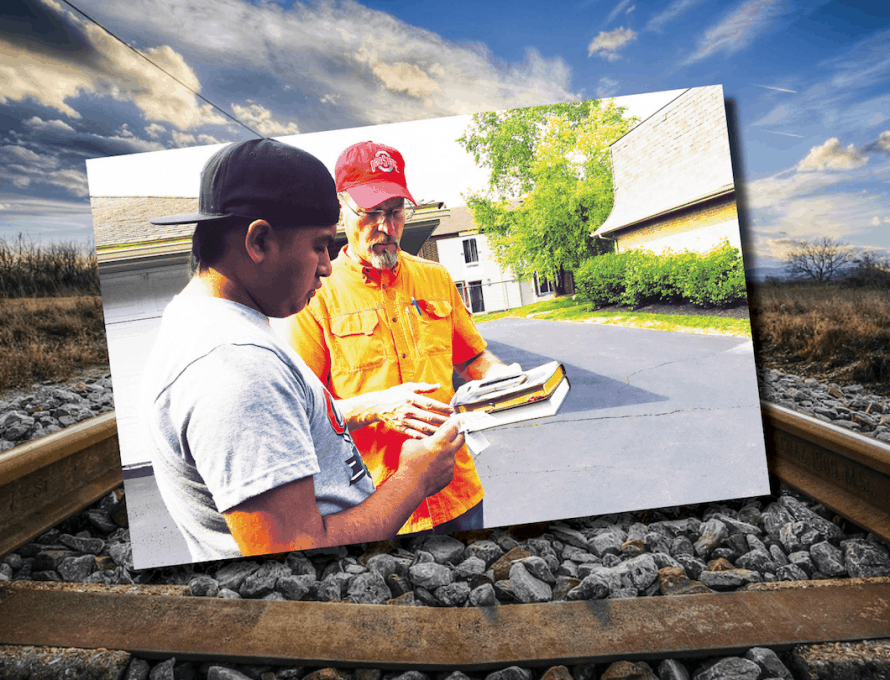 COLUMBUS, Ohio – At right, Tom Johnston witnesses to a young man while promoting Vacation Bible School in a park near Crossroads Baptist here during Crossover Week, which preceded the Southern Baptist Convention’s annual meeting June 16-17. Johnston is a professor of evangelism at Midwestern Baptist Theological Seminary in Kansas City, with a long-time passion for sharing the gospel and developing evangelists. Pathway photo

KANSAS CITY – “Let’s beat the train.” On July 2, 1980, 19-year-old Wheaton College student Tom Johnston worked as a garbageman with BFI waste management in Des Plaines, Ill. Along their route, Johnston and his colleagues serviced three houses that shared a driveway running across the railroad tracks. As they came up to these houses that day, their driver saw the freight train barreling down the tracks and felt confident they could beat it.

Johnston, who now serves as an evangelism professor at Midwestern Baptist Theological Seminary here, has no “direct memory” of what happened next.

“The truck stalled on the first set of tracks right in front of the train,” he says. “The train struck two feet of the cab and the remainder hit the back of the truck.

“I was severely injured,” he says. For eight days, he lay in an “agitated coma” and was restricted to the nearby Holy Family Hospital for 20 days. “It took me about a year to recover from the trauma. The secondary injury was a large cut on my left forearm.”

Injuries have healed, but Johnston’s collision with this freight train left one lifelong impact – a sense of urgency for serving Christ and evangelizing the lost.

‘What had I done for Jesus?’

Born in France to missionary parents, Johnston first professed faith in Christ at the age of four and was baptized at 13. Although he grew up in a household committed to proclaiming the faith, he realized after his accident in 1980 that his life had so far been spiritually unfruitful.

“For the first year, I was angry at God for allowing me to be in the accident,” Johnston admits. But now he thanks God for what he learned from it.

At the end of the 1981 football season at Wheaton, he shared with his teammates these lessons. In the first place, he told them, he could have died at the age of 19, unexpectedly. Second, he posed a question he’d wrestled with following his accident: “What had I done for Jesus? … Nothing!”

‘My heart sang for joy’

“Not long after sharing with the football team, I asked God to help me know Him and obey Him with the same effort that I exerted in football and wrestling,” Johnston recalls. God soon began to answer his prayer. He surrendered to ministry and changed his degree plan from chemistry to biblical studies.

After graduating from Wheaton, Johnston enrolled at Trinity Evangelical Divinity School to prepare for the ministry. During his first quarter at the school, one of his professors forced him and his classmates to share their faith at least once a week for 10 weeks. So, on Friday nights, he drove back to Wheaton and joined his alma mater’s evangelistic team. He shared the gospel with carriage drivers, taxi drivers, bag ladies and others on the streets of Chicago.

“And the Lord broke my heart,” Johnston says. “I saw that, easily, 90 to 95 percent of the people I spoke to on the streets of Chicago had no understanding of the gospel.” Moreover, some of them “aggressively” rejected the gospel. “It shocked me. I never would have expected that.”

This experience – alongside others – made Johnston realize, more than ever before, that the gospel is truly a gift, and it only made his desire to share the gospel more urgent and more intense.

After graduating from Trinity Evangelical Divinity School, Johnston taught and pastored churches in Quebec, Manitoba, Iowa, and then Minnesota. While teaching evangelism at a college in Minnesota, he and his family began attending a Southern Baptist church, and he became convinced that he needed to earn a Ph.D. in evangelism from the Southern Baptist Theological Seminary in Louisville, Ky.

‘Give them a burden for the lost’

After earning his Ph.D. from Southern Seminary, Johnston joined the faculty at Midwestern Baptist Theological Seminary here, where he strives to raise up New Testament evangelists.

“In my first five years, I had 25 students who told me that they felt called to be full-time vocational evangelists,” Johnston says. “Now, only one or two actually ended up doing that. But my goal when I first came here was to mobilize an army of evangelists for the Lord. … My goal is to teach everybody in my classes – as much as possible – to lead a soul to Christ and to give them a burden for the lost.”

Since only God through His Spirit and His Word can ultimately achieve these ends, Johnston requires his students to memorize Scripture about evangelism – that is, Bible passages about “the gospel plan, about gospel methodology, about gospel passion, and about gospel urgency.”

But he also leads his students to practice evangelism, as when he recently joined Midwestern Students on a trip to New Orleans, La., where they practiced street evangelism. There, participants of the evangelism trip handed out at least 1,700 tracts, had more than 85 gospel conversations, prayed for more than 28 people, and led two people to Christ, Johnston reported in a March 3rd Facebook post.

Just as he urges his students, Johnston likewise urges Missouri Baptists to have a burden for the lost and to share the gospel boldly.

“Don’t be bashful,” he says. “We can knock on doors, and be very loving. We can pray for their needs. We can share the gospel. … But we have to be there. If we’re not there, who’s going to be there. We (Christians) are the only ones that have the gospel of Jesus Christ for salvation. No one else has that, and they’re probably not going to hear it on television or YouTube.

“But we can be there – eye-to-eye, face-to-face, with love sharing the good news of Jesus. It’s the power of God unto salvation.”