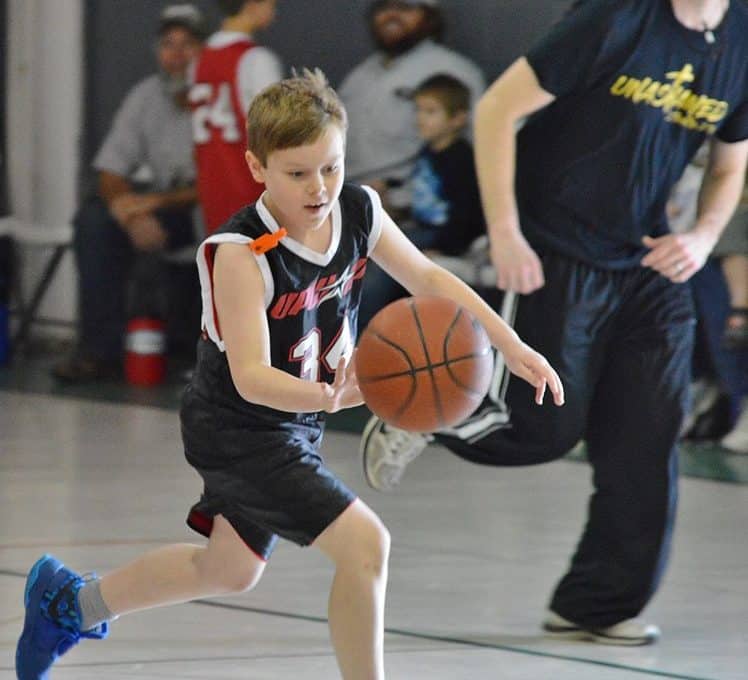 LEBANON – Three Missouri Baptist churches in Lebanon here are modelling what can happen when churches come together for ministry by hosting an area Upward Basketball ministry. Pathway photo by Steve Strauch

Less than two weeks before the first game, the third facility was called into question. Having already made schedules based on three facilities, Pentecost literally felt full-court pressure and saw the clock ticking. Pentecost, along with other pastors from Hillcrest and Heritage, brainstormed how they could possibly find a third gym on such short notice.

Through that discussion, someone noted that Second Baptist Church in Lebanon had a facility that might be available. Pentecost remembered that Daniel George, Second Baptist’s new youth and children’s pastor, had volunteered to coach a team along with his wife, Josie. Pentecost quickly texted George, and in less than 30 minutes, George met Pentecost and unlocked the doors to Second Baptist’s gymnasium. After a tour, George and Pentecost walked across the street to meet with Bill Garrett, the senior pastor.

At that meeting, Pentecost asked Garrett if 2nd Baptist would be willing to join Heritage and Hillcrest as a ministry partner.

“It was a moment of excitement for me,” Garrett said, “because we had the facility and the desire to use it, and God just orchestrated it when the need was there.”

With games just over a week away, 2nd Baptist acted quickly to prepare their facility. They voted to order two new adjustable goals, and Pentecost helped them mark out a court sized for 1st-2nd graders. The church found volunteers to man a concession stand, and George stepped up as the site coordinator.

The goals came in and the court was completed on Thursday, Jan. 24th. That Saturday, Jan. 26th, the gym was filled with hundreds of fans eager to watch their children and grandchildren play. Little did they know that God had made the games possible with a buzzer beater of his own.

“We didn’t know it, but God was preparing this partnership the entire time,” Pentecost said. “The purpose of this program is to reach families with the gospel. Now three different churches have a pathway to share.”

“Heritage and Hillcrest have partnered in the past, and this was a great opportunity to partner with another sister church,” he said. “We are better together than we are apart. We are partnering together in the truest sense of the word.”

In addition to the three churches who host the games, volunteers for the league come from many other churches in the community. Pentecost, Brown and Garrett all affirmed the value of partnership for gospel witness.

“We are united in one cause,” Pentecost said, “which gives a message to the community as a whole.”

Garrett agreed saying, “We all rise together. I have never seen one church’s health detract from another church’s health. If one church becomes healthy, it is always an encouragement to others.”

Brown noted that this partnership could be a model for other churches to consider.

“This is a good message for associations and churches to look for ways to work together and build relationships,” he said. “We are sharing the gospel, and I love that there is a Kingdom focus.”