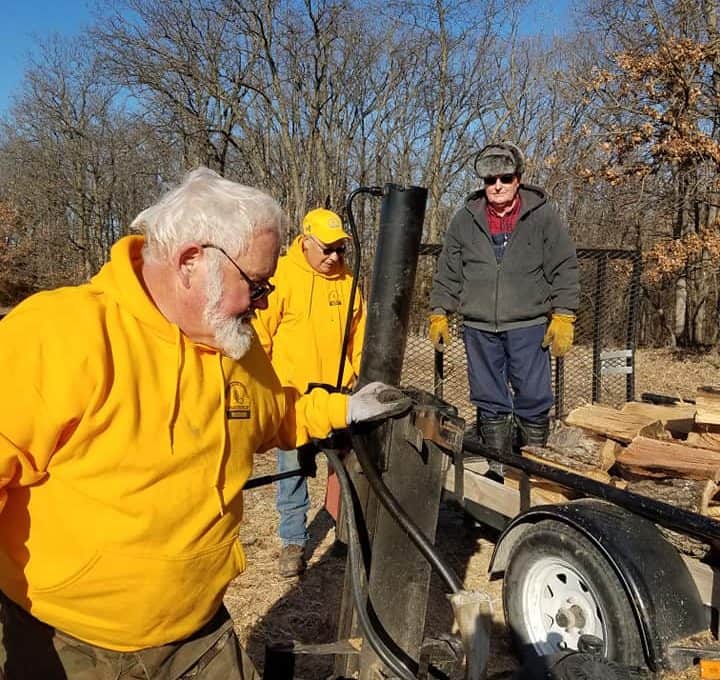 EWING – The Mt. Salem-Wyaconda Baptist Association disaster relief chainsaw unit got together on a Saturday in February to cut and split some firewood for a family that was in need of the wood to heat their home. The participants said it was a good opportunity to meet a need and to provide some training for members of the unit at the same time. Shown here splitting wood are (from left): Jack Fountain, Rob Feldkamp and Danny Griesbaum. Contributed photo by Pete Fountain

EWING – To help bring revival in smaller churches, the Mt. Salem-Wyaconda Baptist Association tries to encourage prayer, evangelistic worship and preaching and they help others in need.  This was demonstrated recently as they began a project of having evangelistic revival services on Sunday evenings in various churches around the association.  They joined together for the revivals but they are also assisting some needy people obtain firewood to heat their homes during the winter months.

Director of Missions Ron Satterwhite said they have 19 churches in the association, which is in the far northeast corner of Missouri. One more in the area is making application to affiliate with them. They are spread out geographically over three counties—Lewis, Knox and Clark.

Most of the churches are smaller and some only have services on Sunday mornings while others have Sunday evening services but typically only a few people attend.  So they decided to join together and put about 30-40 people in a Sunday night service each week with shared music and rotating preaching among the pastors. A different church hosts the Sunday night revivals each week.

“We just wanted to spread out among the churches,” Satterwhite said. He said not all of the churches are coming together for the Sunday evening revivals, but it is building. The DOM said many of these churches had not attempted to have revivals in recent years but they are enthusiastic about joining together with other churches each week for revival.

While on a trip to Georgia with the association’s evangelism and missions committee chairman, Satterwhite said they hatched a plan to have the churches come together on Sunday evenings for revival services.  They go to a different church every Sunday evening and either the host church pastor will preach or they may invite different ministers to preach.  Music, prayer and evangelistic preaching commences.  Satterwhite says that seven of their association churches have participated and even more have joined together for prayer meetings to support the Sunday night revivals.  Because they are spread apart geographically most of the churches involved have been along a corridor along Highway 6 in the southern part of the association

During one recent event at First Baptist in Lewistown, the twin brother of the DOM, Pastor Don Satterwhite of Calvary Baptist Church, Sedalia, was invited to preach. To their surprise they found that there were three other sets of twins present in the revival service that night.  They stopped and posed for photos.

Asked what impact the Sunday night joint revivals are having, Satterwhite said they know they are “better together” than they are separately.  Each church might not be able to have enough people gather to have a lively worship service, but by joining together they can do much more.

“The pastors are getting together and praying, and we feel that is a factor.  Before we even started having the Sunday night revivals, we met together for prayer for a few weeks.  We need to be more consistent in prayer.  If we don’t pray for it, we shouldn’t expect it,” the DOM said.

One thing that is significant about this association’s ministry is they don’t want to just come together inside the church to sing, pray and preach.  But they want to take the gospel and ministry outside the walls of the church.  The association has had a strong presence in disaster relief ministry for many years.

A few weeks back in February, one of the members of the association’s disaster relief chainsaw unit heard about a family that relied on a woodturning stove for heat and was getting very low on firewood.  Another person had some trees that needed to be topped out.  So the association DR team gathered to cut eight pickup loads of firewood for the family.

Phyllis Rogers said they had a great time and met a real need as 14 members of the crew came together from three churches to cut, split and stack the wood. “It was a blessing for this family,” she said.

Satterwhite said it was good training for the crew members as well as met a need for a family or two.  He said “I call this ‘C.I.A. — Christians in action.’”

The Sunday night revivals are going to be expanding to more of the association churches soon he said.

Satterwhite is hoping the Spirit of the Lord will continue to permeate this rural association of mostly smaller churches.  He desires that they worship together, preach, share Christ and minister to the needs of their community with blessings of tangible things like firewood.

So on Sunday night, people in far northeast Missouri may need to check which church is hosting the revival that week. But there will be a church-full of people praying, singing and worshipping the Lord together.  Not just four or five people, but maybe 45.  That is the power of joining together, Satterwhite said.

Satterwhite is a bivocational DOM, also pastor of the Cedar Grove Baptist Church outside of Kahoka.