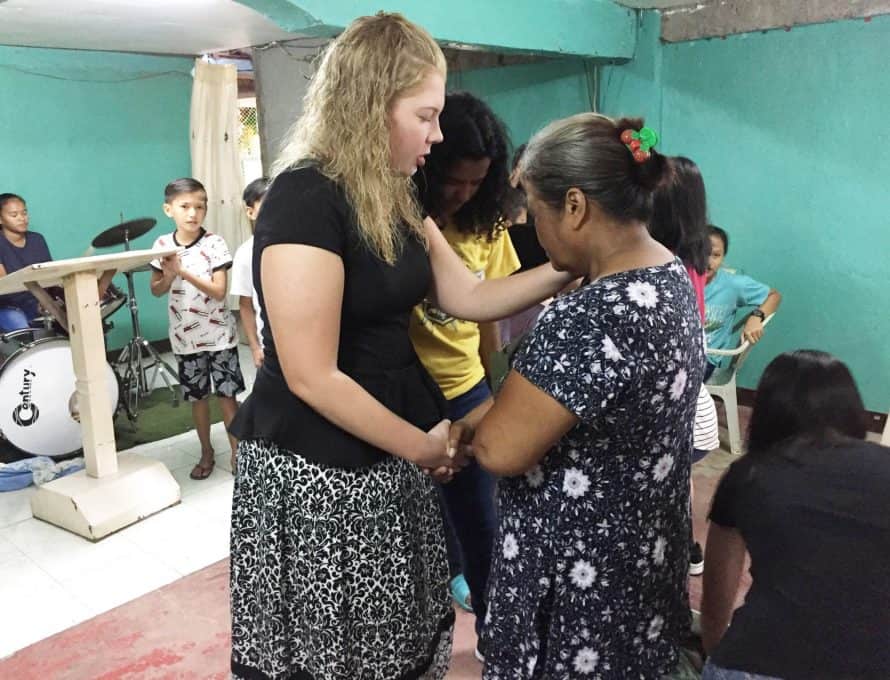 GUATEMALA – Southwest Baptist University student Kaylee Smith prays over a woman at one of the churches the group visited as part of the school’s WinterFest mission emphasis. Submitted photo

BOLIVAR — The Center for Global Connections (GCG) at Southwest Baptist University sent out 117 students, faculty and staff on both domestic and international mission trips during the January intersession called “WinterFest.”

Nine groups traveled to Guatemala, Houston, South Asia and other locations around the world.

“The joy of participating on a CGC WinterFest team is that it encourages students to affirm and love others in communities near and far,” said Dr. Rob Harris, vice president for student development. “The efforts given by team members often will inspire hope while sharing God’s love in ways of physical labor, play time and worship.”

Runners Without Borders co-leaders, Amanda Berkstresser and Daniel Frazee, led a team of 14.

“Through adversity that changed our plans, our team grew and learned God uses any circumstance to plant seeds,” Frazee said.

The team was scheduled to visit a school; however, the visit was cancelled, forcing them to spend the day at a local market. At the market, the team met a local man.

“Our translator read scripture with him and prayed with him. He accepted Christ right on the spot,” Frazee said.

Berkstresser stayed with a team member who was hospitalized during part of the trip. They were placed in a ward with another young patient and her father, whom the SBU students got to know during their stay, Berkstresser said.

While in the hospital, the women felt a prompting from the Spirit to share the Gospel with the two. After hearing the Gospel, the father and daughter accepted Christ as their Lord and Savior.

“Our team truly learned how powerful prayer is and that we need to give up everything and trust in God,” Frazee said.

Over the past five years, the CGC has sent out more than 138 global teams. The CGC is one of the largest short-term volunteer programs in the United States.