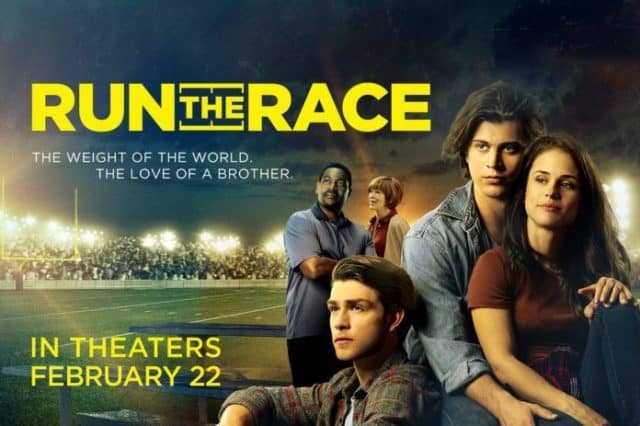 I’ll get straight to the point. “Run the Race” is probably the best Christian movie I’ve ever seen. Is it really better than “I Can Only Imagine,” a movie which represented a huge artistic leap forward in the genre? Yes. Yes, it is. It’s hard to describe how happy it makes me to say that.

Don’t be put off if you watch the trailer on YouTube and aren’t impressed. It’s far better than the trailer or its generic-looking poster. This is a good movie, and one you and your family will enjoy. Give it a chance to surprise you.

Telling the story of a pair of hard-luck brothers as they work hard to earn football and track scholarships, Run the Race steps up the faith-based movie-making standard. Aspiring Christian film-makers need to be taking notes. It has believable characters and actors playing high schoolers look like they’re all the right age. The dialogue didn’t make me cringe and I genuinely laughed. There’s a romance that’s PG-friendly yet endearing, a redemption arc that acknowledges forgiveness doesn’t magically solve past transgressions. It’s edifying without being preachy. Even the football scenes are well-done. To cap it all off, there’s a clear gospel message that didn’t come across heavy-handed, too easy or fake.

You won’t recognize many in the cast – aside from perhaps the brothers’ coach, played by Bubba from “Forrest Gump,” Mykelti Williamson – and their surrogate mother, Frances Fisher from “Titanic.” The most famous face is that of Tim Tebow – an outspoken Christian and one of the film’s producers – has a cameo. When the script is as well-done as this one is, you don’t need a star.

In case there’s any confusion, I liked this movie. Go see it, so more like it can be made. I want to see them as well.