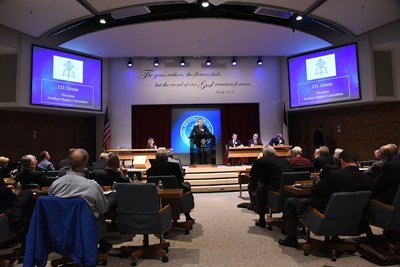 NASHVILLE - In his Feb. 18 report to the Southern Baptist Convention Executive Committee, SBC President J.D. Greer named 10 churches he said should be asked to assure the convention they are working to correct their policies and procedures relative to sexual abuse. The EC's Bylaws Workgroup released a statement in response Feb 23. BP photo by Morris Abernathy

In his Feb. 18 report, Greer specifically named 10 churches included in recent news reports about sexual abuse cases involving Southern Baptist congregations. He noted these churches should be asked to assure the convention they are working to correct their policies and procedures relative to sexual abuse. See related Baptist Press report.

“We understand it is difficult, if not impossible, to issue a report on sexual abuse that will be met with satisfaction by everyone,” Ken Alford, chairman of the bylaws workgroup, said in his message to the Executive Committee. “That is the reality of addressing an issue which has brought such pain, tragedy, and hurt. But we remain committed to act on behalf of all individuals and churches who have been impacted by the horrific sin of sexual abuse.”

On Monday, February 18, 2019, in his presidential address to the Executive Committee of the Southern Baptist Convention, Dr. J.D. Greear mentioned ten churches he deemed worthy of inquiry regarding whether or not they were “operating with a faith and practice that upholds the Baptist Faith and Message, specifically Article XV, which says that we should seek to provide for the abused.” On the following day, Tuesday, February 19, pursuant to both the president’s request and the Executive Committee’s internal structure, this list was brought under the initial purview of the Bylaws Workgroup of the Executive Committee.

The Bylaws Workgroup requested on February 19 that the president provide information he referenced as a “dossier” containing the information upon which he based his naming of the churches, and he supplied that dossier to the workgroup on the afternoon of February 22. The workgroup immediately met on that day, and also on the next, and after lengthy and prayerful deliberation, voted to present this report in the next meeting of the Executive Committee.

The Executive Committee is recommending to the Convention’s messengers this June an amendment to the Convention’s Constitution affirming that the Convention does not, and will not, cooperate with a church that clearly evidences indifference to addressing the crime of sexual abuse, a crime virtually all Southern Baptists and all Christians believe to be monumentally destructive and worthy of the harshest punishment.

It is our collective opinion that in crafting the proposed amendment, the Executive Committee intended to use the test of “evidencing indifference” to the threat or fact of sexual abuse as the standard to determine that a church is not in cooperation with the Convention. Therefore, the receipt of credible information that would demonstrate such indifference should be the trigger for any sort of inquiry into a church’s conduct. It is also our opinion that the Executive Committee did not intend for every allegation that a church has demonstrated indifference to establish guilt which would then have to be disproved — in effect, a presumption of guilt which the Executive Committee should view as untenable and unscriptural.

We utterly and completely condemn the abominable horror of child sexual abuse. We must also be careful that our righteous anger does not prevent a deliberate and thoughtful response. Although the overwhelming majority of sexual abuse cases remains tragically unreported, in virtually all reported cases, the abuse and cover-up of abuse were criminal acts undertaken by a few individuals within a church. The church body rarely knew about these actions and even more rarely took any action to endorse or affirm the wrongful acts or the actors themselves. The Convention, through its Executive Committee, should not disrupt the ministries of its churches by launching an inquiry until it has received credible information that the church has knowingly acted wrongfully in one of the four ways described in the proposed amendment:

(a) employing a convicted sex offender,
(b) allowing a convicted sex offender to work as a volunteer in contact with minors,
(c) continuing to employ a person who unlawfully concealed from law enforcement information regarding the sexual abuse of any person by an employee or volunteer of the church, or
(d) willfully disregarding compliance with mandatory child abuse reporting laws.

Acting in accord with these principles, and biblical principles such as Matthew 18:15-20, Proverbs 18:17, and others, we applied such a test to the churches which, in the President’s opinion, had been publicly singled out because of allegations that employees or volunteers within each church had committed sexual abuse. We looked at the information which the President supplied to us as his basis for listing the church and attempted to determine in each case whether the Bylaws Workgroup had credible information that the church is evidencing indifference to sexual abuse in one of the four ways described in the proposed amendment, or in some similar manner such that reason and prudence would require further inquiry.

We also considered whether the combination of such factors as the passage of time, changes in the church’s administration and membership, and the church’s adoption of policies to prevent abuse and properly respond to charges of abuse would make launching an inquiry of no value in addressing sexual abuse but only further harm a congregation recovering from the effects of crimes committed in its midst.

While victims of sexual abuse should always be encouraged to report the crimes against them, we urge all members of the Executive Committee and messengers to the Southern Baptist Convention to avoid publicly calling the names of churches without having documentation of criminal convictions and giving prior notice to the church. No individual possesses the authority to declare a church to be under a Convention inquiry of any kind. But where criminal convictions along with ecclesiastical actions by the church body which violate the constitution of the Southern Baptist Convention are present, we are confident the Convention stands ready to act with all the resources at its disposal against the horrible and egregious sin of sexual abuse.

We think such untoward actions by a church will be first and best known to the local association and the state or regional convention. When questions arise as to whether a church is in friendly cooperation with our Convention, we believe it is preferable and fairer to all involved if the names of suspect churches come to the attention of the Executive Committee and the Southern Baptist Convention from those sources.

Under the principles set out above, we make the following report with respect to the churches identified by President Greear to our Workgroup:

1. Arapaho Baptist Church, Garland, Texas
Based on the information provided by the president, we have no evidence that the church, as a body, violated any of the four provisions. We believe no further inquiry is warranted based on that information.

2. Bolivar Baptist Church, Sanger, Texas
Since &#91;no staff member or volunteer&#93; is … reported to be a convicted sex offender, (a) and (b) are not applicable. If the allegations are true and provable, the church may have violated (c) and (d). We believe further inquiry is warranted.

3. Brentwood Baptist Church, Houston, Texas
Since &#91;no staff member or volunteer&#93; is … reported to be a convicted sex offender, (a) and (b) are not applicable. There is no allegation in the president’s material of (c) or (d) on the part of the church. We believe no further inquiry is warranted based on that information.

4. Cathedral of Faith, Houston, Texas
Information provided by the president states that a “registered” sex offender “leads” the church. We believe further inquiry is warranted.

5. Eastside Baptist Church, Marietta, Georgia
Based on the information provided by the president, we have no evidence that the church, as a body, violated any of the four provisions. We also note that, based on media reports and conversations with church leaders, it appears that after the events in question the church strengthened its existing policies to prevent abuse and properly respond to charges of abuse. We believe no further inquiry is warranted based on that information.

6. First Baptist Church, Bedford, Texas
Since &#91;the former pastor&#93; was not reported to be a convicted sex offender during his time in the church, (a) and (b) are not applicable to First Baptist, Bedford. There is no allegation in the president’s material of (c) or (d) on the part of the church. We would note, however, that media reports allege &#91;former pastor Charles&#93; Adcock was under indictment on 29 counts of rape and sodomy of a child at the time he was hired by the church. The Fort Worth Star-Telegram reported on February 22, 2019, that Adcock “is now a registered sex offender living in Arkansas, online records show.”

A published statement by the church’s current pastor, who was not the pastor at the time of the hiring described above, is available on the church’s website and states, “In 2015, the church membership was shocked, disgusted and angered to learn about the cases against Charles Adcock. When his background came to light Adcock left the church and those responsible for allowing Adcock to serve at FBC Bedford were removed from their positions shortly after his departure.” The church also indicated it has revised policies and procedures to help prevent such a hire in the future.

We believe no further inquiry is warranted based on that information. We further believe this church appears to be an example of a church, affected by the actions of a few individuals, that has taken decisive steps as a congregation.

7. Second Baptist Church, Houston, Texas
Based on the information provided by the president, we have no evidence that the church, as a body, violated any of the four provisions. It appears that the church has had, and continues to have, significant, detailed procedures and policies in place to prevent abuse and properly respond to charges of abuse. We believe no further inquiry is warranted based on that information.

8. Sovereign Grace Church, Louisville, Kentucky
Information provided by the president includes the statement “two Great Commission Council member&#91;s&#93; went on the record about their concerns over the leadership and their previous handling of abuse cases within churches they led.” This information provides a basis upon which to believe the church may have evidenced indifference to sexual abuse. If the allegations prove to be true, the church may have violated (c) and/or (d). We believe further inquiry is warranted.

9. Trinity Baptist Church, Ashburn, Georgia
Based on the information provided by the president, we have no evidence that the church, as a body, violated any of the four provisions. We believe no further inquiry is warranted based on that information.

The next step which the Bylaws Workgroup will take with respect to those churches where additional inquiry is warranted will be to formulate and send letters of inquiry. These letters will be similar to the letters the Executive Committee has used on previous occasions when it has considered whether a church is in cooperation with the Convention.