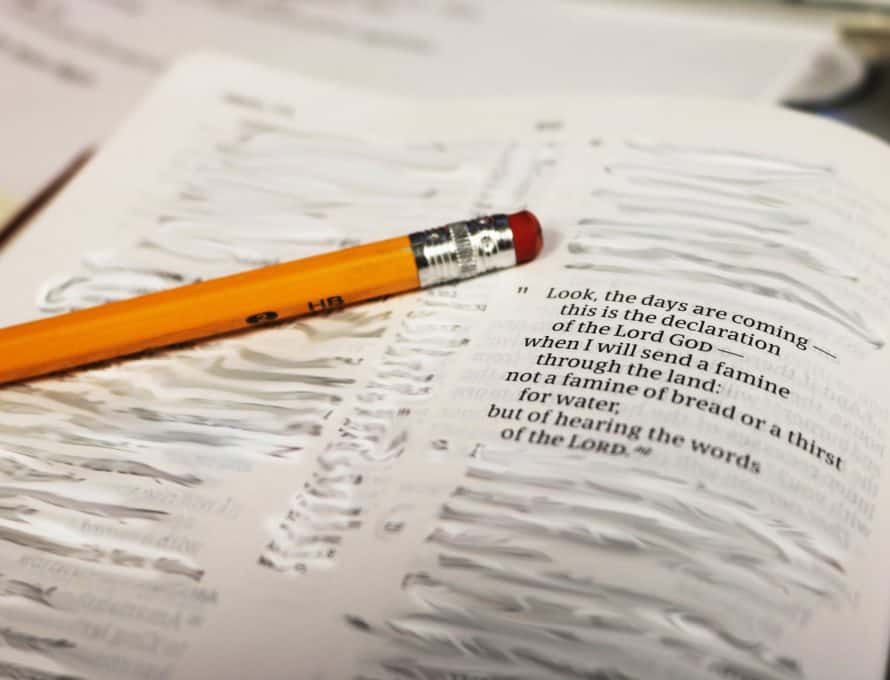 Research groups and Christian leaders have warned that, in recent years, biblical knowledge is being erased from America’s cultural memory. But one Missouri lawmaker hopes to stem the tide of this ignorance of Scripture. Artwork by Brian Koonce

JEFFERSON CITY – Last March, the Wall Street Journal’s (WSJ) Timothy Puko reported that Israeli Prime Minister Benjamin Netanyahu spoke of Moses bringing “water from Iraq.” To their credit, the WSJ later corrected the story: In reality, Netanyahu said that Moses brought “water from a rock,” as recorded in both Exodus 17 and Numbers 20.

For Missouri lawmaker Ben Baker, this biblical blunder is only one example of a decline in biblical knowledge across the nation that has prompted him to sponsor a bill in the Missouri House of Representatives promoting elective courses on the Bible in public schools.

A ‘freefall’ toward biblical ignorance

In recent years, multiple research groups have testified to the drastic decline in biblical knowledge, especially among young people. According to the Barna Research Group, for example, only one-quarter of Millennials read the Bible at least once a week. Moreover, only 60 percent of Americans can name even five of the 10 Commandments; 12 percent of adults believe that Joan of Arc was Noah’s wife; and 50 percent believe that Sodom and Gomorrah were husband and wife.

“As far as I can tell, we are in a freefall,” Timothy Larsen, McManis Professor of Christian Thought at Wheaton College in Illinois, told The Pathway. “Biblical literacy among young people continues to decline year on year and, I think, this erosion is happening more rapidly and dramatically now than it was just a decade or two ago.”

Though U.S. Supreme Court rulings that banned school prayer and Bible reading are often accused as the primary culprits for modern-day biblical illiteracy, the root of the problem started long before these 1960s rulings. According to Boston University Professor Stephen Prothero, in his book Religious Literacy, evangelical Christians in 19th-and-early-20th-century America began to emphasize religious emotions and experience, often to the detriment of learning Scripture and understanding the truths of the faith. Moreover, those who fell captive to liberalism and secularism elevated emotions and experience above a Bible that they saw as imperfect and historically inaccurate.

According to Larsen, the more recent “freefall” in biblical knowledge has “many contributing factors”: the general decline in “long-form reading”; an emphasis in churches on entertainment, rather than instruction; and, of course, “the exclusion of the Bible from many school curriculums.”

To this list, we can add the “rise of the age of hyperlink browsing and social media” as well as the “increasingly frantic pace of life,” New Testament Professor George Guthrie, author of Read the Bible for Life (B&H, 2011), told The Pathway. But the problem goes much deeper than this: “The root cause … has to do with the condition of our hearts. Are we drawn to the beauty and power of God’s good Word because we are drawn to God himself?”

Churches will have the greatest impact if their members “are being transformed by the power of the Scriptures, seeing themselves as part of God’s great mission to the world,” Guthrie said. Nevertheless, since the language and literature of the nation’s culture has “been so affected by the biblical literature,” Bible classes in public schools are commendable.

Indeed, according to Missouri Rep. Baker, every U.S. citizen needs a basic knowledge of the Bible. Without it, how can they fully understand the writings and beliefs of the nation’s founders? Likewise, students should know that Abraham Lincoln’s famous line, “A house divided against itself cannot stand,” comes originally from Matt. 12:25. Or take a line from Martin Luther King’s famous “I Have a Dream” speech of 1963: “… and we will not be satisfied until justice rolls down like waters and righteousness like a mighty stream” – most of which comes directly from Amos 5:24.

Already, Missouri law (Statute 170.340) allows schools to use “books of a religious nature” in “elective courses in literature and history,” as long as they’re not used in a manner that violates the U.S. Constitution’s Establishment Clause. But, unlike the current statute, HB267 allows schools to teach full elective social studies courses explicitly “on the Hebrew Scriptures, the Old Testament of the Bible” and “the New Testament of the Bible.” Moreover, this law calls on the state’s education department to “recommend academic performance standards” and “develop written curriculum frameworks” – to be available to Missouri school districts for the 2020-2021 school year.

By creating these standards and curriculum frameworks, the state would not only prevent teachers and school districts from promoting Scripture in a way that violates the Establishment Clause, but it would also free school districts from fear of legal reprisals should they offer these courses.

As such, this bill would be welcome, according to Doug Jacobson, pastor of Eureka Baptist Church in Richland and Elementary Superintendent at Swedesborg R-3 School District.

“Schools are not inclined to offer such classes,” he explained, partly “due to fear of lawsuits.” Other factors that concern school administrators, he added, involve “expense to the district, lack of qualified personnel and graduation requirements.”

Jonathan Whitehead, a trustee with the Southern Baptist Convention’s Ethics & Religious Liberty Commission and attorney with the Whitehead Law Firm in Kansas City, noted that “threats of lawsuits and controversy have led some schools to treat the Bible like a taboo.”

“While classes have always been legal, as recently as 2004, only 8 percent of public schools offered elective Bible courses.” With its “modest” aims, Whitehead added, HB267 may raise this percentage in Missouri.

“Schools can already offer such classes,” he said. “This bill would merely give local schools some reasonable guidelines. This may give schools more confidence about offering a Bible class that is consistent with the law.”