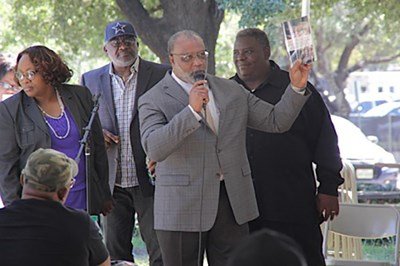 Terry Turner speaks to the Texas State Fair annual pastors’ luncheon, describing his research into the impact of slavery on African American families that resulted in his book, “God’s Amazing Grace: Reconciling Four Centuries of African American Marriages and Families.”

MESQUITE, Texas (BP) – Terry Turner understands the value of knowing African American history by having seen the importance of discovering his own family’s history.

Turner, a past president of the Southern Baptists of Texas Convention, began looking into African American history as part of his doctoral research and discovered a connection between his story and the larger story of African Americans.

He was introduced to the research of Harvard sociology professor Orlando Patterson who examined the links between the breakdown of African American families today and slavery.

“Patterson brought to my attention that the greatest problem that African Americans were given from slavery is a history of disconnected fathers and husbands,” said Turner, whose own research and story became the basis of his book, “God’s Amazing Grace: Reconciling Four Centuries of African American Marriages and Families.”

“Because those roles were destroyed, we’ve never been able to redefine them in the African American community,” Turner said, noting, “Of course fathers lead families. No family is complete without a father.”

Turner experienced this himself at age 10 when his father passed away. The pain and stress of growing up without a father followed him for years. Later, he had a child out of wedlock, continuing a cycle of absentee fatherhood into a new generation. Eventually, Turner came to faith in Christ, got married and had additional children.

For his first 25 years of pastoral ministry, Turner counseled couples to live out Christian principles in their marriage, but he struggled to find the satisfaction he felt should have come from his own marriage and family. He began his doctoral work at Dallas Theological Seminary with an emphasis on family and marriage, in part to get answers to the pain in his own family.

As he researched the broader history of African Americans for his dissertation, Turner became interested in his lineage, tracing his family back to Warren and Elvira Turner, both born into slavery. Warren had conceived a son with another woman before gaining his freedom in 1865. Even after marrying Elvira, Warren fathered another child out of wedlock.

Later generations of men in the Turner family continued this pattern of risk factors including cohabitation and out-of-wedlock births. During slavery, Turner said, nearly nine out of 10 African Americans cohabited because it was their only option.

“I believe these risk factors were handed down to us through the generations of time,” said Turner, senior pastor of Mesquite Friendship Baptist Church in Mesquite, Texas. “The Bible tells us that the sins of the father would be handed down to the third and fourth generations. A lot of time we don’t take into account how what our parents went through impacts our lives. … Many of the risk factors present in my life were also present in my great-grandfather’s life.”

To turn around what he underscores as a crisis in American families, Turner urges all Americans to understand African American history — both the broader history of slavery and racism and the individual stories within families.

“I think the big problem is a lack of knowledge,” he said. “That’s what my book is all about, trying to promote an awareness and knowledge of our history. African American history has been basically written out. A lot of people don’t take into account where we are today in our country as far as race relations and the problems our families have. The family is the first institution God created. It is the basis of all of society. When the family structure is messed up and diluted, you’ll find that society is messed up.”

While slavery impacted African-American families by taking husbands and fathers out of the home, Turner said it also impacted Anglo families by passing on racism and prejudice through later generations.

Churches have a role to play in teaching African American history since most won’t learn it elsewhere, he stated.

It’s important for churches to teach the Christian principle of love — and be clear about their opposition to hate, he said, adding that love isn’t just something for Caucasians to better understand; African Americans need to get it as well.

“You have to fight hatred with love, which is the premise of my book,” Turner said. “Many African Americans look at American history and see how evil it was toward us and how enslavement was so difficult on our ancestors, and they want to rise up and take vengeance. My book is designed to show how the power of love brought our ancestors through all of that pain — and it will also bring us through it too.”

Because the Bible speaks directly to what ails families, whether African American or otherwise, Turner said his book is full of biblical passages.

“The Bible addresses every issue we deal with,” he said. “Preachers today don’t preach against sin like we used to. The greatest tool we have to change society is when a preacher stands up and preaches against the sins in society.”

There is hope for struggling families as churches begin to directly address some of the risk factors that are not only present in African American families but are rising across the board, Turner said, citing such risk factors as out-of-wedlock births, cohabitation and abandonment by fathers.

“I believe it can be turned around, but we have to know where we came from,” Turner said. “I encourage everyone to study their history. It was beneficial to me and has helped me to become a better father, a better husband, as I learned what my ancestors went through.”