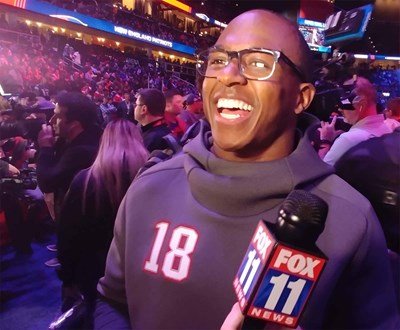 “I just wanted to be like my dad,” Slater said of his Hall of Fame dad Jackie during Monday’s Super Bowl LIII Opening Night event at the State Farm Arena in Atlanta. “… I’m so fortunate to have my father present in my life and active and pouring into my life.” Photo submitted

ATLANTA (BP) – Matthew Slater won’t have any divided loyalties when he takes the field Sunday night against the Los Angeles Rams in his fifth Super Bowl.

With two Super Bowl victories and two losses, the New England Patriots’ special teams player hopes to have a winning record by the end of the night.

He’s not quite as sure about his dad’s loyalties.

“He’s told me he feels like he can’t lose,” Slater said about his father Jackie Slater, an NFL Hall of Famer who played his entire career with the Rams organization. “Either way this game plays out, he feels like he’s going to be happy.”

The game has provided an interesting twist between a father and son who have a tight relationship — and who are also brothers in Christ.

When Matthew was 7 years old, Jackie sat him down in his room, took an illustrated Bible and shared the Gospel with his young son. Matthew listened and gave his heart to Jesus that night.

Over the years, Matthew learned from his dad a lot of lessons about life, football and faith.

“I just wanted to be like my dad,” Slater said during Monday’s Super Bowl LIII Opening Night event at the State Farm Arena. “If my dad had been an engineer, I’d have wanted to be an engineer. We had a very special relationship. Still do. I’m so fortunate to have my father present in my life and active and pouring into my life.”

Jackie, now the offensive line coach at Azusa Pacific University in California, spent 20 years as an offensive tackle with the Rams — the first 19 in Los Angeles and his final year in St. Louis after the team moved there in 1995. When he retired, his 259 regular-season games played as an offensive lineman set an NFL record. He was a seven-time Pro Bowler and was inducted into the NFL Hall of Fame in 2001.

“I’m probably going to look at the game different than anybody else,” Jackie told 1090 AM in San Diego. “I love the Rams. I’ve been supporting the Rams all these years. I left a lot of sweat, blood and tears out on the football field as I played for that organization.”

“But I’m also a dad,” Jackie said, “and I have a son that’s playing with the New England Patriots.”

In the radio interview, Jackie said he has been impressed with the graciousness he’s seen in his son Matthew whether he wins or loses, but especially in defeat. After last year’s Super Bowl, when the Patriots lost to the Philadelphia Eagles, Jackie found Matthew after the game to encourage and comfort him.

“The best team won today,” Matthew told him. “They were better than we were today. They deserve to win.”

Then Matthew added another perspective on the game: “There are a lot of Christian guys on that team, and these guys are giving a lot of glory to God.”

Matthew, who has two kids of his own, said observing Jackie taught him what it meant to be a godly, sacrificial father.

“It takes a lot of sacrifice and patience and being able to put their needs above yours,” Matthew told Baptist Press. “My dad displayed that all the time.

“At the other end of that, there’s a time to be stern, and there’s a time to instill discipline in your children,” he continued. “I didn’t enjoy that discipline as a child, but I’m so thankful for it now. I hope that I can be half the father that my dad has been to us.”

Matthew grew up immersed in the Rams’ culture and is grateful for how good the organization has been to his family. But he said he owes the Patriots, a team for which he has played for 11 years, even more — and he’s hoping to help bring them a victory on Sunday, even if doing so might cause his dad some mixed feelings.

“Obviously I know my dad’s always going to support me and want to see me be successful in any endeavor,” Matthew said. “But I know he’s just giddy about this week and about this game.”