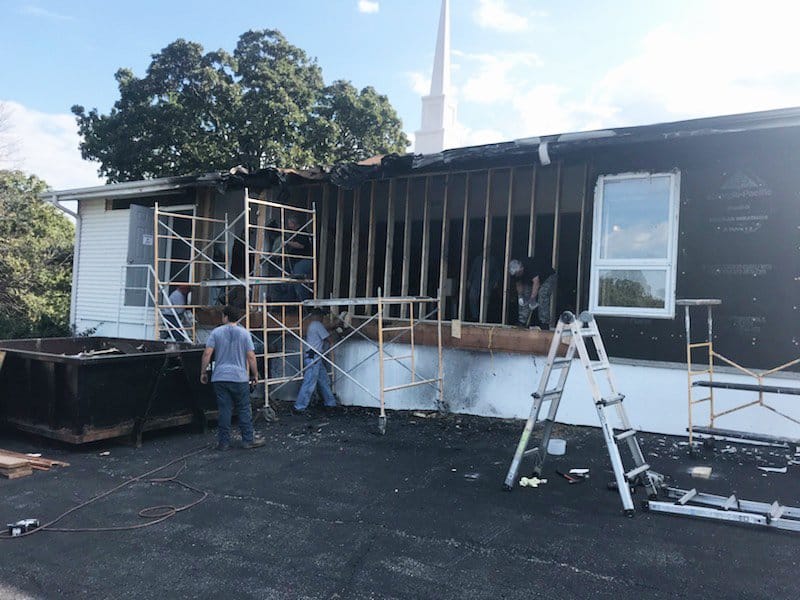 WARSAW – Arson to Cedar Grove Baptist Church in August resulted in $35,000 in damages, and displaced services for the congregation for four months. Submitted photo

WARSAW – Fire insurance, a good thing to have before leaving earth. Worshippers at Cedar Grove Baptist Church in Warsaw also know that an insurance policy is a good investment to have while here, in case of fire, which is exactly what occurred to their church in August of last year.

Early Monday morning, Aug. 27, a passerby spotted a fire raging on an outer wall on the west side of Cedar Grove Baptist Church. About 30 feet of the building burned, also impacting a 30’ x 25’ section of roof and ceiling.

“A fire investigator determined that it was arson, though there are still no leads at this time on who started the fire,” Cedar Grove Pastor Barry Edwards said.

“Construction was completed in time to hold services in the newly remodeled sanctuary Sunday, Jan. 6,” Edwards said. “This was a blessed way to begin the New Year.”

During the construction period September through December, services continued uninterrupted in the church’s gym.

Edwards said that a couple of outside companies were needed in the remodel, but volunteers from the church did most of the work, from clean up to final installation.

The cost of repairs tallied $35,000, coming in $18,000 under the original estimate. Included in this price tag were new exterior siding, shingles, wiring of a light and ceiling fan, drywall, painting and trim. New carpet was also installed.

“We have a team of men who are good carpenters, drywallers and painters,” Edwards said. “They have done many mission projects for people in our area as well as trips to Texas to rebuild after the hurricane. The general consensus was if we could go elsewhere to build, we could surely tackle this project.”

Computers and guitars stolen during the incident were also replaced.

“We have been trusting God and watching Him work in many ways,” Edwards said. “We are thrilled to begin the new year in the sanctuary and are so thankful to all who helped in any way.”

Cedar Grove Baptist Church is located on Missouri Highway 7, north of Warsaw, and is a member of Fellowship Baptist Association, also headquartered in Warsaw.