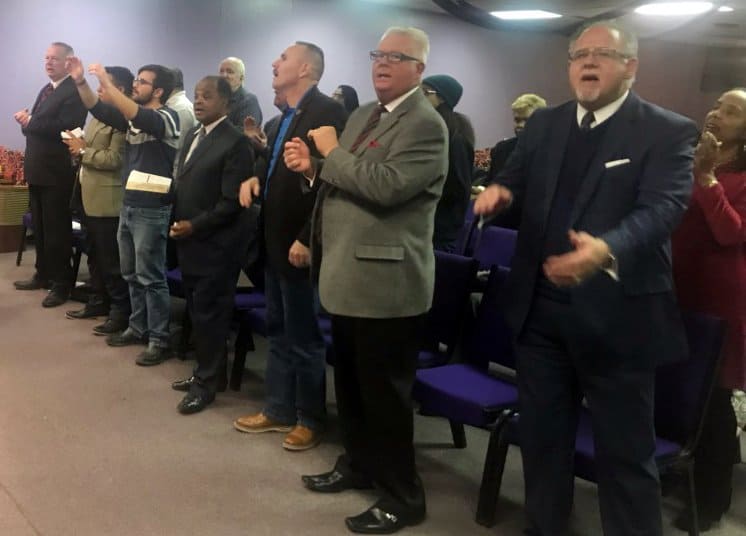 The 7 p.m. service marked a milestone for 78-year-old African American pastor Robert Coverson, the event’s preacher, who marched in Detroit with King during the civil rights movement. Many suburban residents are afraid to cross Eight Mile Road and venture into the deep inner city during the day, Coverson said, let alone after dark.

“I saw last night God touching the hearts of people and I saw walls falling,” Coverson told Baptist Press the next morning. “I saw hearts being tenderized for the idea of we are our brother’s keeper. I saw a new love relationship starting. It was awesome.”

“Everything in Detroit breeds race,” Vroman told BP, referencing Eight Mile Road, racial riots of the 1960s, and racism that continues. “It was important to remember things that happened and proclaim Christ.”

The event emphasized unity in Christ, spotlighted the church’s efforts to plant diverse churches, and proclaimed Christ while remembering King.

“I think it was one of the most significant things I have seen in Southern Baptist life,” Vroman said. “Not just talking about it with resolutions, but doing something that matters to the community, as far as making a statement to the African American community.”

“It was extremely important for our denomination to see all of our pastors come together in a common cause for someone who did so much for so many,” Patterson said. “It was a great time of celebration and a great time of remembering the legacy of Dr. King, and it’s a great time for us to look forward to in our future and see what we can do together.”

In 2020, the BSCM plans to host a King celebration at a larger venue allowing statewide participation, he told BP. The BSCM had hoped to host an event this year.

“God’s called us to be one big family and I believe as we work together,” Patterson said, “we can do more together.”

The SBC “has plateaued in the South and if it’s going to grow, it has to go to the north,” Coverson told BP. “And if it doesn’t deal with this issue of confirming through their fruit that they’re no longer the organization that historically discriminated against people of color, then people of color will not trust them or want to be a part of what they’re doing.

“And it hinders the spread of the Word of God in the north.”

Coverson, pastor of Meditation Missionary Baptist Church in Detroit, served as the first African American president of BSCM in 2003.

During Coverson’s presidency, he encouraged the BSCM and state Baptist associations to adopt Martin Luther King Jr. Day as a paid holiday for employees, which would allow greater denominational participation in such events.

“For the first time in the history of our convention, we came together to celebrate a hero, Dr. King, in a way that broke down some walls,” Coverson said of the Jan. 22 worship. “We didn’t know each other on a personal level. We didn’t know each other’s story. And last night gave us an opportunity to tell the story. And God’s Spirit permeated the place and we’ll not be the same anymore.”

“My dream and vision is that the pastors and churches in the suburbs, and the pastors and the churches here in the inner city will come together and begin to work towards the goal of love,” Caldwell said. “The church and Christ are under attack (by the world). They’re coming after the church, and that’s because we’re separated.”

Caldwell recalled King’s statement that 11 a.m. on Sunday marks the most segregated hour in the nation.

“The reason I joined Southern Baptists,” he said, “is because I believe that we have to become one in order to win this battle.”