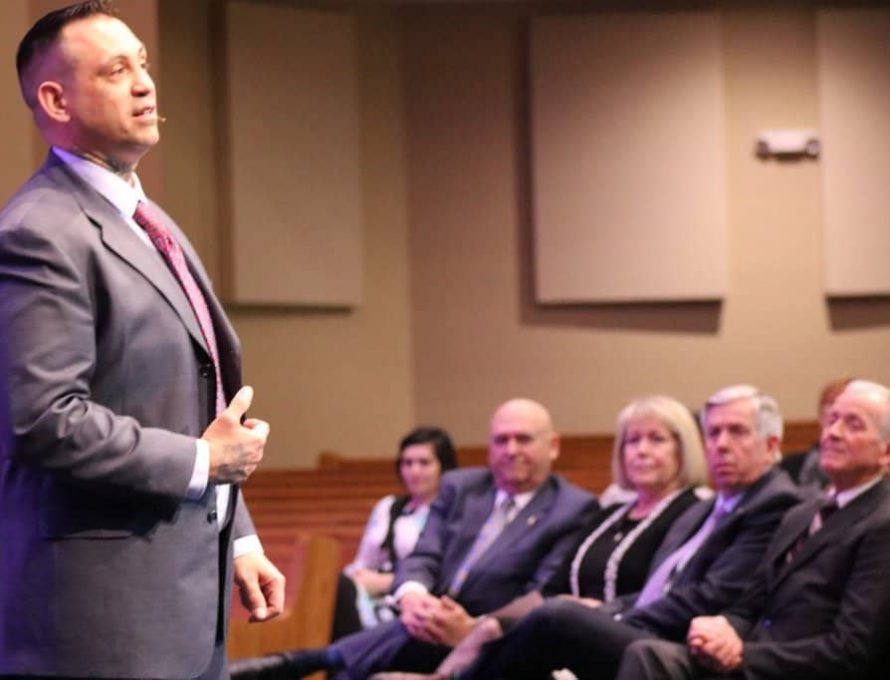 JEFFERSON CITY – John Stroup challenges state legislators to faithfulness in their public service during a legislative prayer service at Concord Baptist Church here, Jan. 9, 2019. In the background, Missouri Gov. Mike Parson and First Lady Teresa Parson look on. On their right is Concord Pastor Monte Shinkle, and on their left is Kent Parson, the governor’s brother and pastor of Elkton Baptist Church, north of Bolivar. Stroup is the co-founder of Freeway Ministries, an outreach to the homeless, drug addicts and ex-cons, which is based out of Crossway Baptist Church, Springfield. Pathway photo by Benjamin Hawkins

JEFFERSON CITY – John Stroup held the attention of more than 400 elected officials, their staff and guests Jan. 9 as he challenged them to be obedient to God’s will during this year’s legislative session, even when it may not be convenient or easy.

“God can use a homeless dope fiend like me,” Stroup said. “Just imagine what God can do with an elected official who is willing to step outside of his comfort zone and obey the call?”

Stroup, president and co-founder of Freeway Ministries in Springfield, was keynote speaker at the 14th annual legislative prayer service hosted by Concord Baptist Church here and the Christian Life Commission of the Missouri Baptist Convention (MBC). Stroup was languishing in a prison cell when he came across a Bible left by a former inmate. He read it, accepted Christ, and after his release began Freeway Ministries. Freeway bridges the divide between the church and nearly 1,000 people a week who are struggling to emerge from addiction and life behind bars. It has rapidly grown with its own headquarters with ministries in other states and South Africa.

“God blesses obedience,” Stroup told the crowd, which included Gov. Mike Parson, Lt. Gov. Mike Kehoe, Secretary of State Jay Ashcroft, Attorney General Eric Schmitt, State Auditor Nicole Galloway, State Treasurer Scott Fitzpatrick, and dozens of legislators from Missouri’s House and Senate. “He’s faithful to bless what He says He blesses, and He’s faithful to stand against what He stands against. God can change a culture and history with one man or one woman who is willing to do whatever it takes.”

Though it was a non-denominational event, Missouri Baptists were well-represented. Special music was led by vocalists Cindy Baumann, Brad Newbold and accompanist Debbie Poire, all members of Concord, as well as vocalist Hannah Taylor of Jefferson Avenue Baptist Church in Springfield.