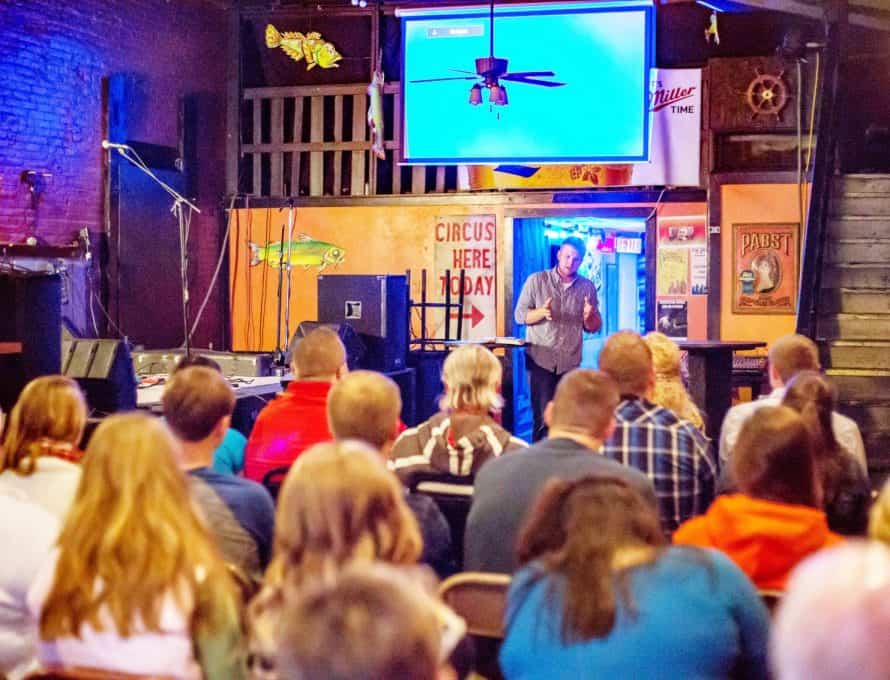 WARRENSBURG – Atticus Dyer never wanted to plant a church. When he felt called to vocational ministry at the age of 17 during a revival, he envisioned being a pastor, but church planting was not a part of that picture.

After completing college and seminary at Midwestern in 2013, he reconnected with John Cox, lead pastor of Concordia Baptist and his former high school football coach. Cox shared with him a vision for rural church planting. God began to stir in Dyer a heart to plant a church. That heart was born largely out of what he witnessed in the leaders of Concordia Baptist.

“I saw God was doing something there at Concordia. I love John Cox and I would do a lot of things for him, but I wouldn’t church plant for him. When I saw this group of 7-8 men praying weekly for their people, and seeing people being delivered from a lot of things, I wanted to be part of it.”

His wife, Bailey, was as surprised as he was at the turn of direction, telling him, “You told me for 7 years of seminary you would never be a church planter.” After months of sending out resumes and praying for other pastoral opportunities, this seemed to be the only pathway God was opening. Dyer says, “There’s a little bit of desperation in the story, and I’m OK with that.”

As meetings with Cox and the Concordia leaders continued, the vision for a church plant in Warrensburg, began to unfold. Though Warrensburg isn’t exactly rural, it was a place where “we could saturate with the gospel and people will go to the ends of the earth because of the university,” Dyer says. His aim, he admits, has never been to fill a void or do something revolutionary. There are many solid churches that are doing wonderful work in Warrensburg and on the University of Central Missouri (UCM) campus. “There’s a need but it’s not because other churches aren’t doing anything…. Because of the campus and the influx of people it brings every year, there’s just a lot of lostness…we want to saturate with the gospel.”

In 2014, Dyer and his wife launched a gospel community of Concordia Baptist in Warrensburg. Meanwhile, Dyer began walking the streets of the town. He’d go to the gym or the library or take walks down Pine Street – the bar scene – handing out water bottles, sharing the gospel, and inviting people to their gospel community. There he became aware of the depth of spiritual need around him. “The lostness isn’t just the college students,” he says. “People are looking for alcohol, sex, partying, to escape what’s deep inside. We’ve seen that very clearly on Thursday nights. You offer people a bottle of water and tell them you’re here because Jesus loves them, and can you pray for them, and they’re receptive.”

Their gospel community officially became Pillar Church in April of 2016. Dyer was joined by Ryan Shippy and Seth Petsch to form a three-man pastor/elder team. They chose to meet on Sunday evenings in unconventional locations, such as the former bar building they are now seeking to purchase, in hopes of drawing those who might reject a more traditional service time and location, such as college students. “We’re not here only for the university, but we can’t skip over it either,” Dyer says.

God opened a second unexpected pathway of ministry for Dyer shortly after the church plant launched. Brad Carr, the former BSU director at UCM, invited Pillar to provide meals at the BSU. “The BSU was a foreign concept,” Dyer says, “because I’d gone to Midwestern.” But what he saw energized him. “Their mission was to send students out from the BSU to the ends of the earth, and I loved that.” When Carr approached him about taking over as director of the BSU, it seemed an unexpected but obvious answer to Pillar’s intention for him to be bivocational.

Dyer’s work as pastor and BSU Director overlap yet are separate. “I see the BSU as a conduit, or funnel, that helps churches get on campus,” he says. “We’re a student organization, so we can do things on campus that a church can’t do. We want to help the church have a bigger impact on campus than they would without the BSU.” Likewise, he sees the BSU as a conduit to bring students into local churches. “The BSU create spaces for believers to meet unbelievers and disciple them to baptism and growth in the local church.”

Almost three years into the church plant, Dyer is realistic yet hopeful about the challenges – and the potential – of church planting and campus ministry. “We’re seeing lives changed, but it’s not on the massive levels we would love to see,” he says. Still, he’s excited by what has transpired, particularly the stories of those who have taken the gospel out from Warrensburg to other places – such as a young woman who returned to Wales with her newfound faith after graduating from UCM, or a young man from Mexico City and his wife, both of whom were baptized at Pillar and are now part of a church plant in Mexico City.

These are the kinds of stories Dyer prays will continue to materialize. “There’s an influx of people of every year. My long-time vision is to be a place to train up men and women for the 2-4 years they’re there and send them back out with the gospel to reach the ends of the earth.”

They may be a new church, “but we have an old song we’re singing.” The name Pillar comes from 1 Timothy 3:14-16, serving as a reminder that “the pillar is supposed to lift up something more significant than itself. We lift up Jesus Christ so that all you can see is Him.”