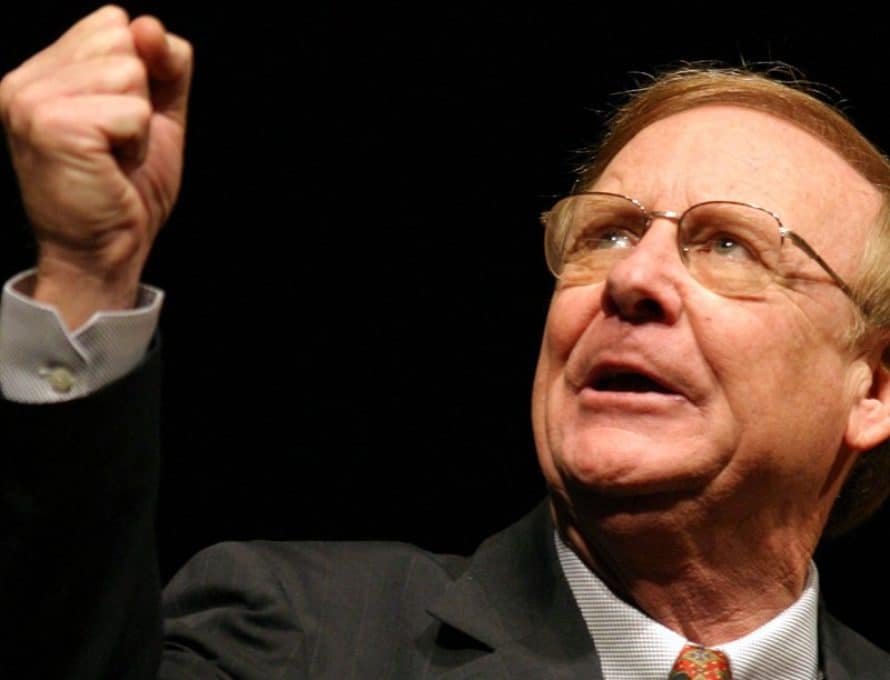 Evangelist Bailey Smith (1939-2019) preaches during a chapel service at Southwestern Baptist Theological Seminary in Fort Worth, Texas, in 2005. Smith, 79, died at his home in Duluth, Ga., on Jan. 14.

DULUTH, Ga. (BP) – Evangelist Bailey Smith, who helped sustain the Conservative Resurgence at its outset in the Southern Baptist Convention, died Monday morning (Jan. 14) at his home in Duluth, Ga. He was 79.

Smith’s election as SBC president in 1980 was the second victory for conservatives following the landmark election of the late Memphis pastor Adrian Rogers in 1979.

Harris wrote that Smith told him he had been diagnosed with pancreatic cancer in April 2017. “I was stunned and heartbroken, but he was calm and demonstrated an imperturbable peace at the threshold of the personal physical storm he was entering.”

After receiving care from Atlanta-area cancer specialists, Smith went to the MD Anderson Cancer Center in Houston. Smith and his wife Sandy remained in a Houston hotel for months for further diagnosis, chemotherapy and observation. Doctors ultimately recommended a complicated cancer surgery known as the Whipple procedure that, as Harris described it, offered “a five-year survival rate of up to 25 percent. Although the skill of the surgeon and excellent care of the hospital was commendable, the surgery was not successful.”

Smith’s two terms as SBC president (1980-1982) were marked by his resolute preaching of the Gospel. At one point, he sparked a national controversy over his declaration that “God Almighty does not hear the prayer of a Jew.” The comments, spoken at an evangelical gathering in Dallas that included remarks by Republican presidential nominee Ronald Reagan, subsequently were clarified by Smith and others that he was speaking from a theological, not racial, standpoint.

“Most Baptists have known Bailey Smith as both a successful pastor and an effective evangelist for more than six decades,” Harris wrote, “and his death has left a significant spiritual void in the 21st-century church that seems to be struggling to keep evangelism a priority.”

The book “The Sacred Trust” by Emir and Ergun Caner stated, “Without a doubt [Bailey] Smith is the ideal personification of a Christian who has an unwavering, single-minded commitment to fulfilling the Great Commission.”

Bailey Eugene Smith was born in Dallas on Jan. 30, 1939, the son of the Rev. Bailey E. Smith and his wife Frances. He graduated from Ouachita Baptist University in Arkadelphia, Ark., in 1961 and from Southwestern Baptist Theological Seminary in Fort Worth, Texas, in 1966.

Smith led churches in Texas, Arkansas and New Mexico before being called, at age 34, as pastor of First Southern Baptist Church in Del City, Okla., where he served 12 years. At the time of his election as SBC president, Smith was the youngest man ever to lead the convention, Harris wrote, noting that he earlier had served as president of the Southern Baptist Convention Pastors’ Conference and the Baptist General Convention of Oklahoma simultaneously.

“In 1980 the Del City church baptized 2,000 persons, an accomplishment unprecedented in Christian history,” Harris wrote. “In the 12 years Smith was the pastor … the membership grew from 6,600 to more than 20,000, and in a convention that was known for thriving on growth and soul-winning, Bailey Smith was known as a pacesetter.

“In 1985 the Del City church was flourishing, but Smith sensed a definite call from God to become a vocational evangelist,” Harris continued. “He is the only former president of the Southern Baptist Convention to enter crusade evangelism.” Bailey Smith Ministries conducted area-wide crusades, church revivals, Bible conferences, ladies’ retreats and overseas ministries.

“There is no finer Bible Conference in America than Bailey Smith’s Real Evangelism Conference,” Hunt said. “It will take heaven to reveal what has happened in the hearts of pastors since Bailey Smith allowed God to use him to begin these Christ-honoring events. I believe that time will tell that there has been no man alive any more passionate about winning souls for Christ than Dr. Bailey Smith.”

Smith authored several books, including “Real Evangelism,” “Taking Back the Gospel,” “Real Christianity,” “Real Christian Excellence” and “The Grace Escape.” Harris wrote that Smith was working on his autobiography at the time of his death.

A graveside service for the immediate family will be held at First Baptist Church in Warren, Ark., where Smith once served as pastor, followed by a memorial service at 10:30 a.m. Jan. 30 at One Heart Church in Norcross, Ga.