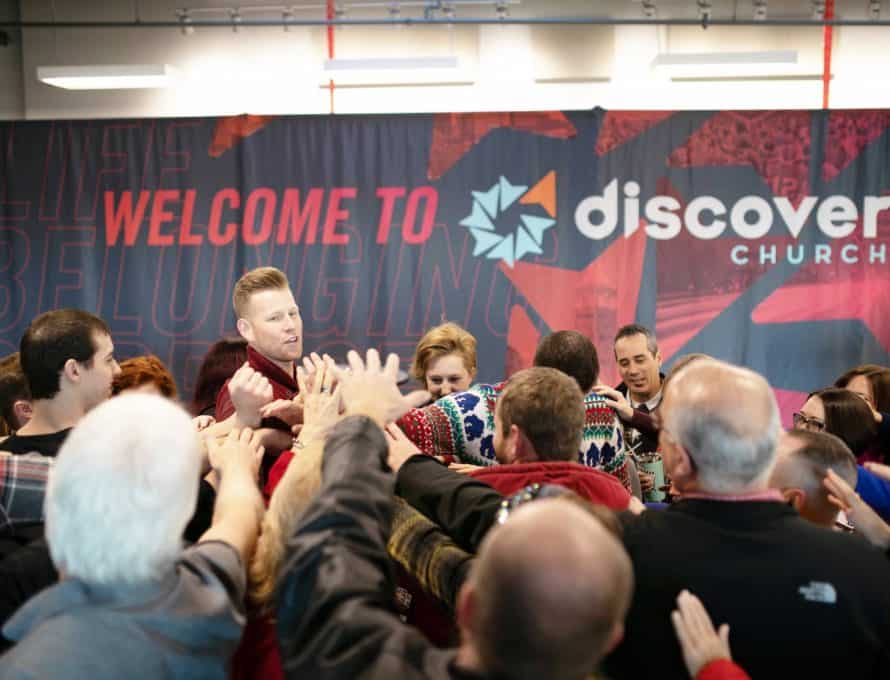 Today the fulfillment of that vision, Discover Church, has risen to about 340 people each weekend.

“What God has done through our church is unnatural,” said Schwent, pastor of Discover Church here. “The trajectory and the velocity we’ve experienced in just the three months since we launched is amazing and not at all the norm. I’m not ashamed, but grateful to be able to brag on God for what He has chosen to do.”

While its official launch date was Aug. 19, God has been orchestrating and strategizing the vision of Discover Church long before that. Schwent was on staff as a student minister at Abundant Life in Lee’s Summit, when God began to stir his heart toward a new calling on his life.

“I knew I wasn’t going to be a student pastor forever, but I didn’t think I would be a senior pastor,” Schwent said. “I wrestled with that thought for a while and then God told me to get over it. He said, ‘I’ve called you to do this.’ Then He began solidifying that my next step would be to start a new church.”

Meanwhile, unbeknown to each other, Phil Hopper, Schwent’s senior pastor at Abundant Life, felt God stirring their church to be a multiplying church.

After serving as a church planting intern and honing in on God’s plan for what Discover Church would look like, Schwent hit the ground running this year building relationships and casting the vision.

During the pre-launch phase, they hosted multiple interest parties in order to gather people together, have conversations regarding faith and church, and allow the Holy Spirit to work.

“We learned that there are a lot of people who have memories of church, but at some point either decided it was irrelevant to their every day lives or they were hurt somehow and never returned,” Schwent said. “So now we must earn credibility that we never lost. We are trying to create an opportunity for people to come and experience church that is life giving—a place where people can find healing for past hurts, hope for present problems, answers to life’s pressing and difficult questions, and a place where hope and faith is centered on the gospel.”

They stepped out in obedience, and God has certainly shown up. Not only in the number of people who have been drawn to Discover Church, but in the individual lives and hearts of those who have come to call this church home.

For example, Schwent said God recently called him to preach a difficult sermon message about tragedy and loss and the suffering people often endure. He preached Paul’s words in 1 Corinthians that, despite the pain, God is good and affliction is momentary and light compared to the cross.

“So we should shift out perspective away from the pain, and toward what God can do in the midst of our hearts and lives in seasons of darkness,” he said.

Schwent found out later that one family who heard the message had experienced terrible tragedy; they experienced the loss of their son just days after he was born. This tragedy had plagued the couple’s marriage for seven years.

“The husband had never spoken about his son’s death until after church that Sunday,” Schwent said. “He pulled out his son’s ashes from their bedroom and brought them to his wife and they cried and hugged and talked through the pain after seven years.”

“That’s the kind of thing that just makes you know it’s your job to obey, and then get out of the way. God, you do your thing. You work through our work and do things that are unfathomable. God has seen fit to call us, bless us, and allow us to scratch out a spot to be used and I’m just incredibly grateful to be part of it.” ν