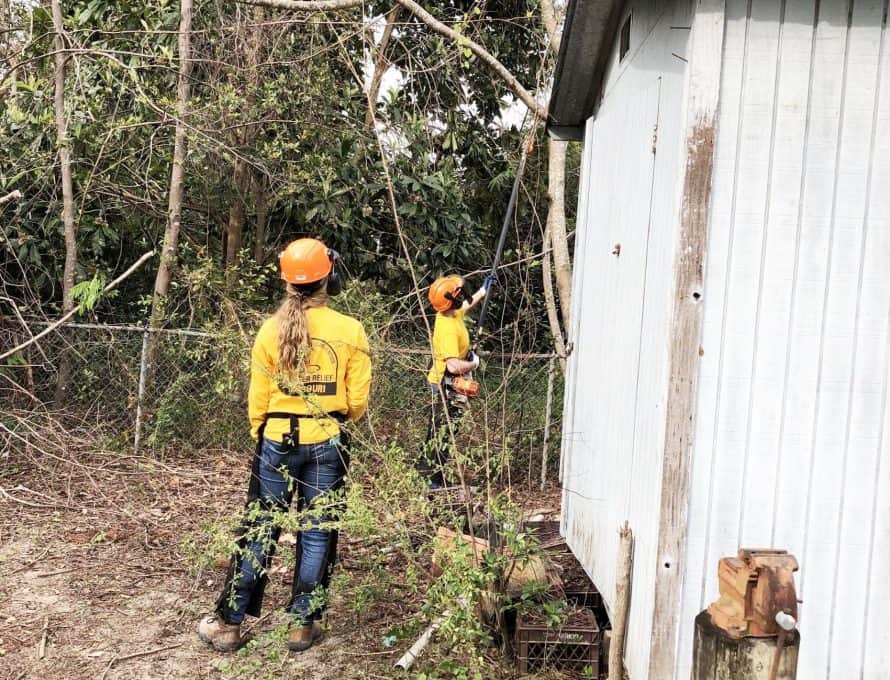 BRISTOL, Fla. – The holidays generally are a time of family, friends, food, gifts and togetherness.

But for the Southwest Baptist University Disaster Relief team, it was an opportunity to help others in their time of need.

The team worked on seven projects while in Florida – mostly chainsaw work – helping remove trees that potentially could fall or cause harm to the homeowners or others in the area.

“I always give it thought,” Craig said of being away from family to do disaster relief work, “but I know that the people we are going to help might not be able to see their family because they are having to deal with these trees on their house or yard that could be hazardous. Too often we think that the disaster relief only lasts a few weeks, but this will take years for the people to find their new normal.

“If we can answer the calling Christ has for us and spend our Thanksgiving helping those that might not have one so that when Christmas comes they can have family back at their house safely, then by all means it is worth it. Especially when we are given the opportunity to share the gospel with them and let the spirit work in the individual.”

Craig has been part of the Missouri Disaster Relief since 2014. The impact of this service led him and a close friend to establish the SBU Disaster Relief team two years ago.

“I have been invested in meeting the needs of others and sharing Christ,” Craig said. “The state and those in charge keep us on constant alert of disasters that are in need of volunteers.

“I greatly enjoy (disaster relief work) and the relationships that I have been able to build. I want to take these experiences and share them with the team so they can get involved as well. There are several team members where this is their second or third callout, so they have some prior experience as well.”

The team was hosted by First Baptist Church-Bristol and was invited to a family lunch on the Sunday it was there, as well as having access to the kitchen and facility for the cooking team to prepare meals for all the volunteers.

SBU was the only Missouri team in Bristol, Fla., that specific week, though other Missouri teams had been there in weeks past. Three other men from Missouri joined the SBU team when it arrived, while a team from Illinois Disaster Relief also was there to help.

“There was a need and we were able to help out as much as we were able to and be the hands and feet of Jesus that we are called to be,” Craig said. “We are not just there to clean up. We are there for the homeowners and helping them find their new normal and how that relates to Christ’s obedience. We were able to have great encounters with homeowners, some lasting relationships were made and everyone on the team was able to understand what it means to be obedient in Christ.”