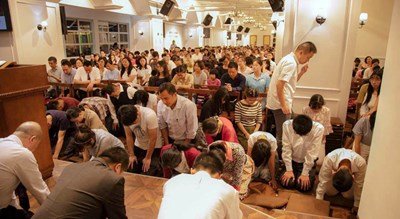 SICHAUN PROVINCE, China (BP) – As China continues to hunt down and arrest members of a house church in Sichuan Province, many of the 100 or more Christians arrested reportedly pledged in advance to persevere even until death.

Gina Goh, Southeast Asia regional manager for International Christian Concern, said many leaders of Autumn Rain Covenant Church — also translated by some as Early Rain Covenant Church — counted the cost and pledged faithfulness in advance of arrests at homes, workplaces and on the streets that have continued since Dec. 9.

Those arrested are being beaten, tortured and denied food and restroom accommodations, Goh said, according to accounts and photos from four released to house arrest or police surveillance. Among abuse, Christians were dragged, stepped on and tied to chairs and had handfuls of hair pulled from their scalp. In many cases, no charges have been filed or announced.

The continuing arrests are the latest in government persecution of Christians that has escalated under President Xi Jinping’s ramped up efforts to “Sinicize” religion, bypassing religious freedom that is guaranteed in the country’s constitution.

Church elder Li Yingqiang, who evaded arrest until 2 a.m. today by hiding, wrote a letter before his arrest to other members in seclusion, World Magazine reported today.

“Beloved brothers and sisters, I am writing this letter in hiding,” World Magazine quoted the communication. “May you all be filled with joy in the Gospel of Christ. May you welcome, filled with hope, the even heavier cross and more difficult lives that lie ahead of you. Christ is Lord. Grace is King. Bear the cross. Keep the faith.”

The government tactic of arresting church members and leaders while they conduct their daily lives is not new to China, Goh said. But the latest incident, he said, represents an escalation in scope.

“This is not completely new, but for something that is this largescale, it is new for sure,” Goh told BP. Intimidating church members and leaders, she said, is designed to make the churches dismantle and force allegiance to the Three-Self Church controlled by the Chinese Communist Party (CCP). Three-Self congregations must display government flags, sing patriotic songs and praise government leaders.

Xi’s religious restrictions enacted in 2017 and tightened in February are preempting China’s constitution.

“The constitution should be the highest law that everyone expects. And this set of rules cannot override constitution,” Goh said. “But China claims to be a country that follows the rule of law, when in reality it doesn’t. It just kind of does things as it wants.

“A lot of Christians even before this set of rules was enacted, they were prepared that the colder winter was coming, and they actually braced themselves for it,” Goh said. Underground congregations and house churches have been meeting in smaller groups of five or 10 to avoid detection. But the Rain Covenant congregation has countered persecution by remaining visible. Its leaders have been vocal opponents of religious persecution.

“Autumn Rain Covenant Church, they are actually very brave,” Goh said. “They continue to push for being able to worship in public. Once their venue was cracked down, they actually brought their worship to the streets…. This really irked the authorities.

“They basically want to crack down on (Autumn Rain) to serve as an example to smaller churches,” Goh said. Autumn Rain has several locations that comprise a membership of a thousand or more, she estimated.

The international community should continue to advocate for religious freedom in China, Goh said. And individual Christians, she noted, should support American churches and missionaries trying to help and encourage those persecuted.

“I know of initiatives that are also trying to reach out to these underground churches and Christians” she said, “trying to teach them how to react spiritually but also legally. They need this kind of help as well. Other than praying for them, if there is a way for you to support this type of initiative … and asking them how we can pray, I think that will be helpful as well.”