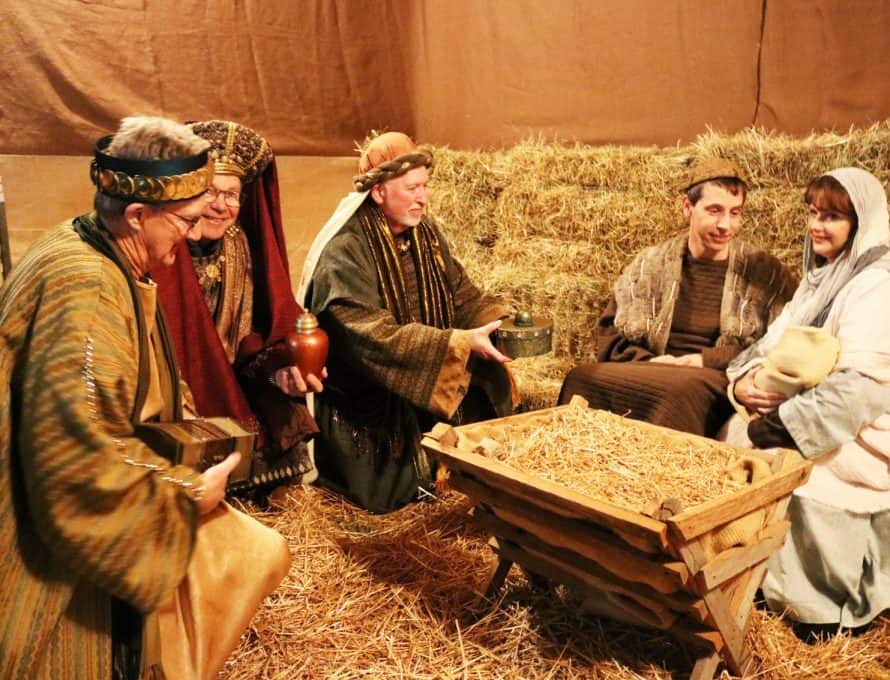 JEFFERSON CITY – Visitors to the Dec. 1  Christmas open house at the Governor’s mansion were treated to holiday décor that held more meaning than mere garland and candy canes. Governor Mike Parson, a member of First Baptist, Bolivar, asked Concord Baptist Church here to stage a live nativity on the grounds. As crowds wound around waiting to see inside the historic residence, they first got a reminder of the true meaning of Christmas with live shepherds, wise men, and of course, Mary, Joseph and baby Jesus.

“It’s a powerful thing to see and be reminded of who is being born,” said Monte Shinkle, Concord’s pastor. “There’s something very touching about seeing that baby who is innocent being born to carry away our sin. Of course, like we always do, we have over the years introduced all these things, making assumptions about what it was like. We really don’t know that Mary rode a donkey to Bethlehem or anything like that – but I’m pretty sure it wasn’t a Greyhound bus. We may not know exactly where the manger was, but those images don’t take away from the story. The story is the story: good tidings and great joy to all people.”

There can be little debate among those who hold the Bible as true when it comes to many aspects of Christ’s birth: It was prophesied generations prior; He was born of a virgin; an angel announced His arrival to shepherds keeping watch over their flocks by night. They’re all keystones to the sacred Christmas story, and they’re all supported by Scripture. But other aspects found in the creches that merrymakers hold dear often lean more on tradition.

In his book, Urban Legends of the New Testament, David Croteau examines 40 commonly misunderstood passages of Scripture, including three inextricably wound up in celebrations of Christmas: There was no room at the inn, the three kings, and the notion that shepherds were social outcasts. It’s not about bursting anyone’s bubble, Croteau writes – just doing the best possible job at reading the Scripture.

No Room in the Inn

The irony of the King of Kings and Lord of Lords being turned away from an inn and sent to a lowly, rejected locale certainly fits with the theme of the world failing to recognize and accept the gift of salvation Jesus would later offer. And to be fair, it’s not an unreasonable assumption to read Luke 2:7 and picture Jesus being born in a stable – some barn hidden away behind an inn: “Then she gave birth to her firstborn Son, and she wrapped Him snugly in cloth and laid Him in a feeding trough—because there was no room for them at the lodging place” (HCSB).

There can be no doubt from the text that the newborn Jesus was laid in a manger, but the presence of a manger doesn’t have to mean a detached barn for the animals. Crouteau argues that the Greek word for “lodging place” in that verse – kataluma – should be more accurately translated as “guest room” and not, as in most translations, as “inn.” The guest rooms may have been part of an inn, but the writer suspects that Jewish hospitality would mean that the owner let Joseph, Mary, and soon, Jesus stay in his own living space along with other overflow guests. Typical construction at the time meant that most living space in a home or inn was essentially one large room for the inhabitants and livestock, separated by only a few steps or a sloping floor. Archaeological evidence suggests there were typically two feeding troughs in this type of home: a small one in that lower area for the smaller animals, and a larger trough sunken into the floor of the upper area, to be at a more accessible height for the larger livestock. It is in this second trough that Croteau suggests Jesus was laid.

“The story of Jesus’ birth is not a story of a harsh innkeeper, or an incompetent husband,” he writes. “It is the story of a normal birth in humble surroundings There was no palace and no throne. The absolute “normalness” of the birth is striking.”

We Three Kings of Orient Are

The three kings and their famous gifts are a staple of any nativity scene, but much of the image people have is influenced by the 1857 Christmas carol, “We Three Kings,” Croteau suggests. Again, the basic nuts and bolts of the story are very clearly supported by the biblical narrative. The first two verses of Matthew 2 plainly state that “after Jesus was born in Bethlehem of Judea in the days of King Herod, wise men from the east arrived unexpectedly in Jerusalem, saying, ‘Where is He who has been born King of the Jews? For we saw His star in the east and have come to worship Him.’” A few verses later, Matthew records that when they saw Jesus sometime after His birth, they worshiped Him and presented Him with gifts: gold, frankincense, and myrrh. These three specifically named gifts are likely the reason tradition holds there were three wise men; no more and no less. Their traditional names, Melchior, Balthazar and Caspar (or Gaspar) are not recorded in the Bible.

So were these gift-givers from the east kings, magi or wise men? The Christmas carol cemented the image of them as kings, but church father Tertullian also referred to them as kings as early as 200 years after the fact. The Greek word magi can be translated as “astrologer,” and Croteau says they were mostly likely non-Jewish, religious, possibly priestly men who were skilled in astronomy, astrology, dream interpretation, fortune telling and divination.

“Matthew’s focus is not the number, origin, or identity of the wise men, that is probably why it is so ambiguous about some of the details we want to know,” Crouteau writes. “His main point is communicating that these non-Jewish men came to worship Jesus the king.”

The idea that social and religious outcasts would be the first to hear of the Messiah’s birth and be sent to see and worship him is thematically pleasing. But again, the idea of their social station isn’t explicitly a part of the biblical account.

The idea of shepherd’s lowliness, Croteau suggests, comes from later attitudes or from different cultures. Though they were often poor and not the upper crust of society, shepherds are portrayed positively in the Torah and later the complete Bible. Abraham was a shepherd, as was Moses and even King David, perhaps the three most esteemed men in Jewish society. God Himself is equated to a shepherd throughout the Old Testament (Psalm 23:1, Gen. 49:24, Ezek. 34:12 and others). Later, in the New Testament, Jesus refers to Himself as a shepherd (Matt. 2:6, John 10:11, Heb. 13:20). Paul also refers to church leaders as shepherds, which ultimately is where the word “pastor” comes from (Acts 20:28, 1 Pet. 5:2).

“While shepherds weren’t societal outcasts, they were in the lower class, and they do represent the poor and humble,” Croteau writes. “Jesus is not only for the rich.”